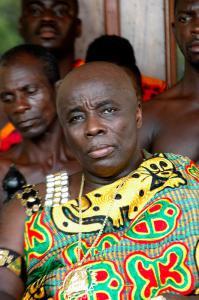 It isn’t every day that WPI plays host to visiting royalty, but it will happen on October 24 when the environmental and sustainability studies (ESS) program welcomes Osagyefuo Amoatia Ofori Panin, King of the Ghanaian nation-state of Akyem Abuakwa, for a presentation titled Saving the Earth, Saving Humanity: A Lecture on Agriculture, Environment Sustainability, and Poverty Alleviation.

The program, which is the keystone lecture in the ESS annual lecture series, is scheduled for 5 p.m. in Alden Hall.

Along with traditional head-of-state duties, the King established a University College of Agriculture and Environmental Studies (UCAES) in 2009 and is an advocate for environmental conservation, among other social concerns, according to an online biography. The King will be speaking at several venues in Massachusetts and Connecticut, where he attended college.

ESS professor Robert Krueger says there are several reasons WPI was able to bring the King to campus. Primary among them, he explains, is the King’s strong interest in social and environmental justice.

“In fact, he is so interested in these issues that he made them a priority when he created the UCAES. I do a lot of work on these issues, too; one of my collaborators is Ghanian and he saw the connection.”

The second reason, says Krueger, is that Worcester is home to one of the largest Ghanaian communities outside of Ghana. “They have a very successful association and the King’s visit will help him reach folks in the U.S. who are trying to good things for their homeland.”

He adds that this may be the beginning of a possible partnership between ESS and the university in Ghana. After his New England visit, the King will reciprocate by inviting Krueger, who is a member of the UCAES international advisory board, to the university to offer lectures and discuss opportunities for collaboration.

Krueger says the King’s main message Thursday will be that social justice and economic development should go hand-in-hand.

“I think the objective is to raise awareness of his work, to spark a conversation that will promote collaborations between our universities, and to offer a hopeful message from his country,” he notes. “The King is very involved with Prince Charles’s efforts on sustainable communities. As minister of the environment in Ghana he created the nation’s current environmental laws, and he has worked with Nelson Mandela on poverty issues.”

Krueger believes the West should take an interest in the tiny nation’s situation. Ghana, he says, has a rich endowment of precious metals, particularly gold. The country also has timber, and recently oil was discovered off its coast.

“U.S. mining companies are there taking these resources and leaving significant environmental damage, which has significant human health and environmental implications for Ghanians living around these mines or the rivers that flow past them. Ghana has also been affected by climate change, which has led to challenges in subsistence agriculture. Why should we care? Because we have an ethical obligation to confront and bear witness to the issues that we are culpable in creating.”

Krueger feels strongly that developed nations can learn a lot from Ghana, starting with compassion for people affected by outsiders’ decisions to consume resources. He advocates banning fracking in the United States and making certain shores off limits for drilling. “We also have to change our habits, because if we don’t, those practices will continue off shore where we don’t see them.”

Osagyefuo Amoatia Ofori Panin is the 35th King of Akyem Abuakwa to have ascended the throne, referred to as the Ofori Panin Stool, in 1999 upon the passing of his predecessor and brother, Osagyefuo Kuntunkununku II.

A reception will follow the lecture. ESS requests those planning to attend to RSVP to Susan Wenc at sjwenc@wpi.edu or call 508-831-6096.