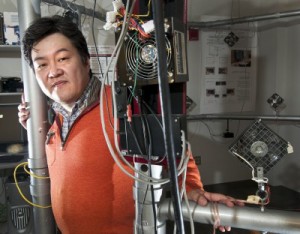 For years, collaborations between WPI’s faculty and international researchers sparked new thoughts and ideas, and led to groundbreaking developments.

But Arts and Sciences Dean Karen Oates noticed that visits from international scholars presented a few problems. The scholars were welcomed warmly by the community, but had no campus accommodations and were often sequestered with direct collaborators. “As a university, we can do better,” she thought.

With newly dedicated housing, WPI recently welcomed two international scholars-in-residence, Haruo Noma of Japan and Martin Burt of Paraguay, for an on-campus stay in university-provided, fully furnished housing in what Oates believes is just the start of hosting visiting scholars. She says the program allows international scholars in all disciplines to share their knowledge and culturally unique points of view with the university community.

“What the institution has been missing is learning about the scholars’ culture and what is important to their culture,” says Oates. The scholars have both technical and cultural knowledge to share, and the university should celebrate both, says Oates. “How wonderful is this for us to interact with each other and learn from each other?”

Faculty members submit an application on behalf of a scholar and then act as the host if the application is approved by the committee, says Oates. Selected scholars come to work with their host, but also participate in the cultural life of the institution as part of the program.

Robert Lindeman is hosting Noma, a specialist in the field of sensors, who recently accepted a position as professor of computer science at Japan’s Ritsumeikan University after nearly 20 years as a senior researcher at the Advanced Telecommunications Research Institute. After working with Noma for more than a decade during trips to Japan, Lindeman, associate professor of computer science, was thrilled when Noma’s schedule allowed his first-ever visit to WPI. “We have come up with lots of ideas over lunch that have led to years of research,” says Lindeman. “Introducing his work to students and faculty will broaden our collaboration.” And, he says, students will see a new approach to problem solving. Scholars in Japan may have an entirely different approach to issues, he says, and he wants students to see that and be inspired to visit Japan.

Noma, on campus until mid-March, says he has enjoyed interacting with students and will take home new experiences as well. As he begins his new role as professor, Noma says he anticipates learning new teaching techniques he can apply in his own classes.

Associate dean Kristin Wobbe hosted Burt when he spoke to the Great Problems Seminar last fall. But now when Burt returns for his twice-a-year visits, he will be living in familiar housing from which to navigate a schedule full of meals with students, visiting Spanish culture classes, and interacting with the Great Problems Seminar. But Wobbe said the whole university benefits from  Burt’s experience as both a seasoned social entrepreneur and the chief of staff for the President of Paraguay. “His impact on the students is lasting,” said Wobbe. “What I want is the opportunity for the students to interact with someone of his character and world view.”

Burt says WPI students inspire him and he is fascinated by the possibility of sharing social entrepreneurship ideas with such an earnest group. Burt says WPI is the perfect place to combine his passion for applying hard science to the social sciences to address the chronic problems of marginalized populations. “WPI is a treasure of resources and talent,” he says. “They have new ideas and fresh ways of looking at problems.”

Oates sees potential in new collaborations with researchers and foreign universities. “I hope we can bring conversation and an understanding of other cultures,” she says. “The challenge is getting a diverse perspective on how to solve a problem. This is only the beginning.”