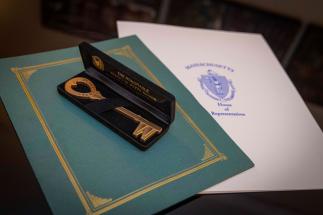 President Leshin is honored with the Key to the City and Recognition from the State Legislature.
Photography
Matt Burgos

On Friday, April 8th members of the Massachusetts State Legislature, the Worcester City Council, nonprofit agencies, and local business partners gathered for a celebratory farewell to President Laurie Leshin and thank her for her positive impact on the region during her eight years as leader of the city’s largest college. President Leshin was honored with the Key to the City from Mayor Joseph Petty, a gift from the Higher Education Consortium of Central Massachusetts (HECCMA), as well as a proclamation from the Massachusetts House of Representatives and the State Senate.

The recognitions from City Hall and the State House focused on President Leshin's efforts in strengthening the K-12 STEM pipeline, supporting innovation and career opportunities in Central Massachusetts, and, more recently, the steadfast guidance she offered the commonwealth during the COVID-19 pandemic. Also noted throughout the evening was President Leshin’s influence in helping increase the number of women students, faculty, and administrators at WPI, as well as serving as a role model for future women in STEM. Fittingly, State Senator Harriette Chandler, who presented President Leshin with the Senate’s proclamation, noted that she was once an adjunct professor at WPI and has carefully watched the gender equality shift on campus with great pride. In return, President Leshin surprised Senator Chandler with news that she will be receiving an honorary degree at this year’s Commencement ceremonies. 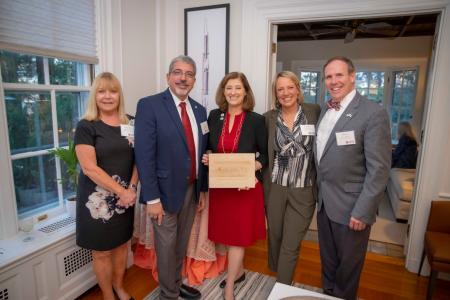 President Leshin receives HECCMA’s tradition gift of a cutting board for her time of service on its Board. 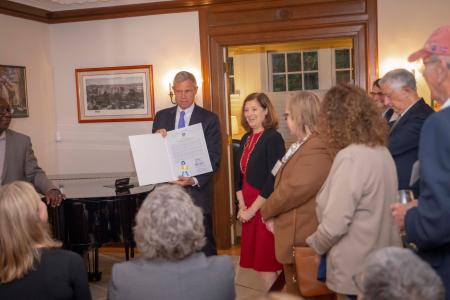 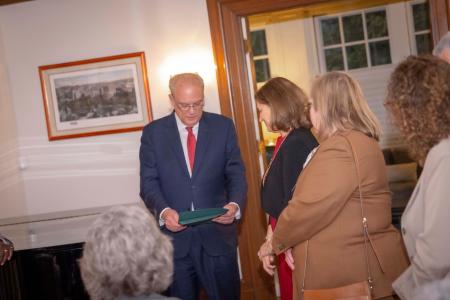 Mayor Joseph Petty honors President Leshin with the Key to the City. 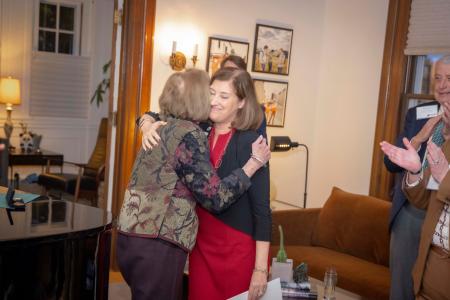 President Leshin and State Senator Harriette Chandler share a nice moment after the presentation of a State Senate Proclamation.