Escape Goats win in category of Battle of the Rockets 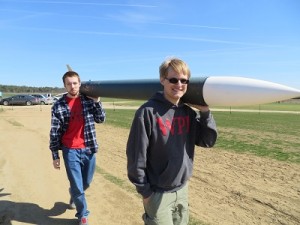 A plaque now hanging in the Collab Lab is evidence of the victory scored by “The Escape Goats” in the Target Altitude Event of the Battle of the Rockets Competition outside of Pokomoke, Md., last month. It is fitting that the plaque be displayed there, the birthplace of both of the competing teams from WPI, named “The Escape Goats” and the “Goat of Goddard.”

The contest tested the rocketry design skills in three categories. The Target Altitude Event focused on the rocket design skills required to launch to a specific altitude. The Video Payload Event rocket was designed to collect sensor data to the highest point, and then deploy the payload that had to provide a video feed with a ground station on its descent. The Mars Rover Event added the complexity of including an autonomous robot that had to survive a launch, and then have the ability to deploy on landing and perform a series of tasks on its own.

Jeffery Tolbert ’17 was one of the organizers of the two teams. He says the WPI Mars Rover that was designed and built for the event bounced on landing, and had the parachute tangle in its wheels when it came time to do its mission. As it turns out, the Rover designs from all the competitors had issues of their own that kept them from performing their appointed tasks. Even with all the effort expended on design and construction over months, “Nobody got theirs to do anything!” exclaims Tolbert.

The weather also created a few unexpected issues over the course of the two-day event; it rained the first day, reducing the opportunities for planned multiple launches. Tolbert believes that the WPI teams would have been more successful in the Video Payload Event with more launch opportunities.

The idea is that the competing teams will work toward precision in the competitions every year, building on the lessons of the previous attempts. This is WPI’s first year in the program, and it is expected that it will enter next year. The win in the Rocketry Event and the successes in all of the launch requirements gives Tolbert confidence: “We’ve got the rocketry stuff down!” And with the addition of robotics students then, he expects the teams to be even stronger.