It is rocket science

Student teams prepare for first foray into Battle of the Rockets 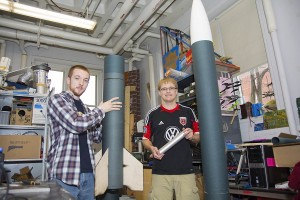 For months, two teams of WPI students have been meeting to plan for the Battle of the Rockets competition outside of Pokomoke, Md. The contest is designed for high school and college competition, and it will test the skill levels in three categories with varying requirements.

This competition is not for your father’s backyard model rockets. These are custom-designed precision machines built under tight tolerances and with specific goals in mind. The Target Altitude Event focuses on the rocket design skills required to launch to a specific altitude. The Video Payload Event rocket collects sensor data to the highest point and then deploys the payload, which must provide a video feed with a ground station on its descent. The Mars Rover Event adds the complexity of designing an autonomous robot that must survive a launch, and then have the ability to deploy on landing, performing a series of tasks on its own.

Each of the three events has strict requirements for on-board equipment, and monitoring and recording devices. The altitude and tracking requirements are completed with off-the-shelf barometric sensors, microcontrollers, or circuitry boards, but some of the equipment must be programmed with software that has to be custom-written by the team members. The selection of the payload equipment is decided based on operation, but also its size and weight. The thrust design goes together with the rocket weight and payload requirements; there are restrictions on the commercial solid fuel engines used, as well.

Jeffery Tolbert ’17 is one of the original organizers of the two teams at WPI. His own flight to rocketry was not typical in that it didn’t begin until he took an independent research class in high school. The teams, called “The Escape Goats” and “Goat of Goddard,” were created in the Collab Lab as clubs to join with the American Institute of Aeronautics and Astronautics Professional Society (AIAA). The 19 students have been meeting twice a week to brainstorm, test rocket designs, write software, and prepare presentations for the Events.

Generally, organizations work toward precision in the competitions every year, building on the lessons of the previous attempts. But this is WPI’s first year in the program, and the teams are starting with a clean sheet of paper. So it is remarkable that they have submitted preliminary presentations in advance of the events, and have already received kudos for their work to date.

Tolbert looks forward to coming back to WPI years from now to see the improvements that will undoubtedly be made to these initial designs by the new crop of students.