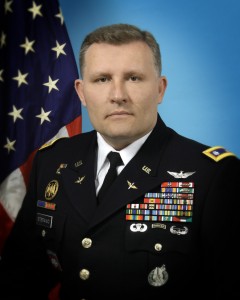 When Lieutenant Colonel Ciro Stefano arrived on the WPI campus to command the Bay State Battalion four years ago, he was excited by the challenge to make the ROTC program stronger than ever before. Now LTC Stefano is readying for a new adventure—one that has him taking over as chief of military science at the United States Military Academy at West Point.

As bittersweet as it is to leave WPI, Stefano says he leaves a solid program and a group of inspired, motivated, and excellent cadets. At WPI he was professor of military science, department head of Army ROTC, and commander of the Bay State Battalion. His highly decorated resume includes many awards, one of which is the General Douglas MacArthur Leadership Award—the Army’s highest award for leadership. His worldwide assignments encompass four tours of combat duty: Desert Storm, Afghanistan, and two in Iraq.

Stefano says he looks forward to working with the high caliber of students and faculty at West Point, and that he is thrilled to become part of the West Point faculty.

It’s rewarding to work with people who are really inspired and brilliant, and then to have a small part in their military future.
LTC Ciro Stefano

“I was like a kid at Christmas when I got the first interview,” he says.

Stefano says working with the dedicated West Point cadets will be invigorating as a leader. “It’s rewarding to work with people who are really inspired and brilliant, and then to have a small part in their military future,” he says. “It’s the best and the brightest, regardless of what their backgrounds are.”

While commanding the Bay State Battalion, Stefano focused on recruiting top-notch cadets and preparing them for whatever their next step will be. The welcome he has felt over the past four years will never leave him, he says. “Everyone is so inspired to teach and develop these students,” he says.

Cadets and students alike were delighted to hear about ROTC and to participate in any of the myriad ROTC activities. “There’s a sense of family here,” he says of WPI. “I am not a direct employee of WPI but I was never treated any differently.” 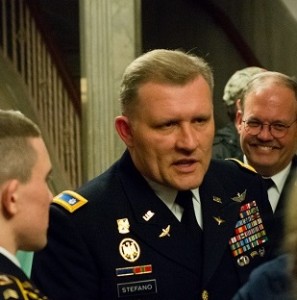 Stefano’s commitment to the Bay State Battalion is obvious in the legacy he is leaving. Of the 275 Army ROTC programs nationwide, his ranked 5th in the nation this year, up from the 8th place spot last year. He developed WPI’s first Hall of Honor and is proud to have “brought back every general officer to ever graduate from one of our schools.”

The Hall of Honor brings the new cadets and more senior leaders from the school together to create mentorship opportunities and professional networks. “I told the cadets, ‘This is your Hall. I might never be inducted, but you will. This is for you.’”

In addition, the number of commissions increased to the highest number in 24 years—20 just last year. “That’s a team of very committed people and superb cadets,” he says. Stefano also established the first Career Day for cadets who were able to spend a couple of hours with a seasoned panel of officers and attend a meet-and-greet afterward for cadets, alumni, and officers.

At West Point, Stefano expects to bring a different viewpoint to his role. “I followed an atypical path,” he says, and didn’t attend West Point like many of his future colleagues. He enlisted, was a chief warrant officer, and was then commissioned through Officer Candidate School. He says bringing those experiences, and the breadth and depth of the knowledge gained from them, will help shape his interaction with West Point cadets.

As one of his last events at WPI, Stefano is honored to host General David McKiernan at this year’s commissioning ceremony on May 16th as part of Commencement Weekend. McKiernan is the first four-star general to serve as the commissioning officer and is guest speaker for this ceremony at WPI. Stefano expects to stay on campus through the third week in May. Then it’s time for relaxing, traveling, and visiting family with his wife and baby daughter before reporting to West Point at the end of June.