Earthquakes are one of nature’s most destructive forces, each year causing catastrophic damage and disrupting lives around the globe. Sitting atop one of the world's most active geologic areas, Southern California is particularly prone to quakes. A 2008 United States Geological Survey report warned that a 7.8 magnitude tremor on the San Andreas Fault could cause more than 1,800 deaths, 50,000 injuries, and $200 billion in damage. While the shaking from earthquakes is destructive, fires that can break out afterward can do even greater damage. A 2012 study by WPI fire protection engineers showed that earthquake-related damage to a building's structural elements and fire protection systems can accelerate the spread of fires and make it harder for firefighters to respond and occupants to evacuate.

That study, led by Brian Meacham, PhD, associate professor of fire protection engineering, was conducted in a five-story concrete building constructed atop one of the world's largest outdoor shake tables. Located at the Englekirk Structural Engineering Center, the facility is part of the University of California San Diego Jacobs School of Engineering. WPI's tests were part of a larger study, sponsored by the National Science Foundation and industry, on the effects of quakes on building structures and systems.

The Anatomy of a Post-Earthquake Fire Test

Just as destructive as earthquakes, themselves, are the fires that can break out in their aftermath. WPI fire protection engineer Brian Meacham and his team have carried out pioneering studies of fires in earthquake-damaged structures, including a recent series of tests in buildings made with cold-formed steel conducted on the world’s largest outdoor shake table.

Title
What is the WPI MyTrips International Travel Registry?
Body

The WPI MyTrips Travel Registry is a confidential and secure platform on which to record travel itineraries and emergency contact information. MyTrips will require travelers to create a one-time profile and then register the details of each trip.

Registry information is confidential. It is used by WPI to track WPI-sponsored travel, communicate with you more effectively if there is an incident during your travel, and forms the basis for WPI's emergency response protocols and communication strategy (e.g., alerts, warnings, evacuation notices) when responding to an emergency or critical incident abroad. 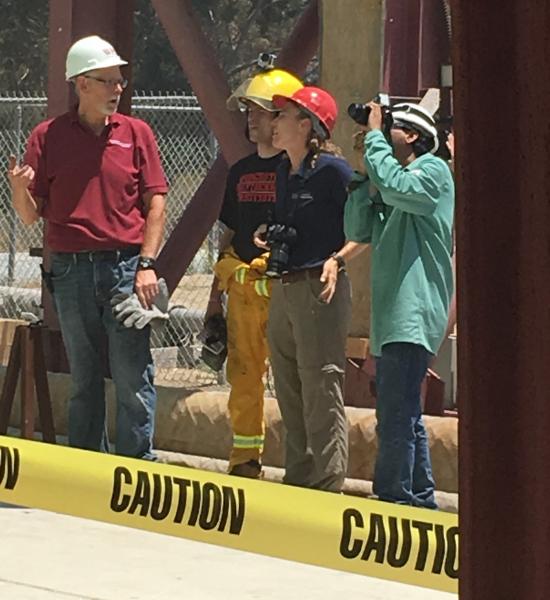 In June 2016 Meacham returned to San Diego with a new research team to conduct a series of tests aimed at determining how a structure constructed of panels composed of lightweight cold-formed steel (CFS) frames with gypsum board cover would respond to a post-earthquake fire. The use of lightweight, prefabricated CFS panels in residential and commercial construction is increasing because they make it possible to build taller structures, they cut construction times, and they are fire-resistant and recyclable. But little is known about how buildings constructed with these new materials will perform during and after quakes.

“Anytime there’s a new building technology it’s good to do full-scale tests because then you can understand how the technology is likely to perform in real life,” says Meacham, who worked closely on the design and execution of the overall research project with co-principal investigators Tara Hutchinson and Gil Hegemier of the Center for Extreme Events Research at UC San Diego.

According to seismic codes, buildings in quake-prone areas can suffer some damage during strong shaking, however they should remain structurally sound. But that damage can leave a building more vulnerable to fire, and a blaze that erupts soon after an earthquake could exploit those weaknesses, posing the threat of collapse. Meacham notes that existing codes often do not explicitly consider damage associated with fire following an earthquake.

We’re trying to quantify the loss in structural capacity in order to help advance our ability to predict if such a building could collapse, and when, in longer duration fires. 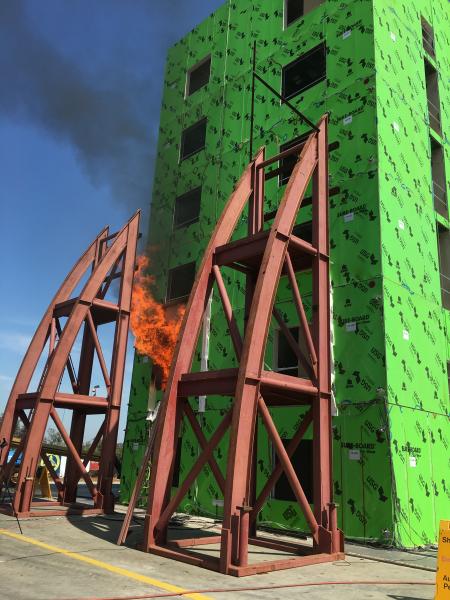 The tests in June were conducted in a six-story building, the tallest cold-formed steel-frame structure ever constructed on a shake table (left). First, researchers from UC San Diego put it through rigorous tests to mimic the seismic activity of moderate to severe earthquakes. After seismic damage was assessed, the WPI team carried out a series of fire tests in several rooms to study the fire performance of the damaged building. They ignited pans of heptane and observed temperature impacts, flame spread, and smoke movement. The goal was to determine the damage to the interior and exterior CFS panel systems and interior doors and frames from a 10-12 minute significant fire exposure.

“Within 10 minutes much of the gypsum board cover became significantly degraded," says Praveen Kamath, PhD, a WPI postdoctoral researcher who is assisting with the study. "This equates to a loss of structural strength and fire protection capacity. With the data we collected we’re trying to quantify the loss in structural capacity in order to help advance our ability to predict if such a building could collapse, and when, in longer duration fires.”

The research also attracted the attention of the city of San Diego Development Services Department. Assistant deputy director Kelly Eisenstein, who attended the live burns, notes that “all of the building codes we have to enforce in our jurisdiction rely on testing like this in order to advance our science and our understanding of how buildings perform both in earthquakes and fire events.”

The San Diego Fire and Emergency Department was also on hand for the tests. Captain Erik Windsor says the research is critical for firefighters who may not be familiar with newer types of building construction and how quickly they burn. “To see how this building holds up under fire conditions is invaluable.”

The research team is analyzing the data collected in San Diego. They will issue their initial findings within the next several months. Plans are also in the works to conduct similar tests on structures built with other emerging building materials.