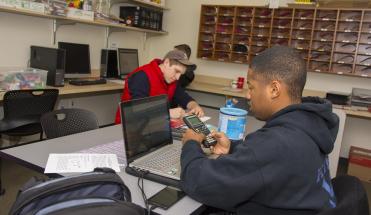 48 RAs volunteer with Worcester organizations to learn about life experiences of others, what they can do to help

Instead of relaxing, marathoning shows on Netflix, or catching up on some well-deserved sleep, WPI’s resident advisors spent their winter break participating in a winter training service project that took them to various locations in Worcester and provided them with a better understanding of the individual experiences of others.

What began as a series of conversations between Casey Wall and Matt Foster (director and assistant director of residential services, respectively) and Jacob Goldblum (complex coordinator) turned into a dynamic way for students to learn about the basic tenets of social justice—which is important now more than ever—and apply that knowledge and experience to their work as RAs in order to create a more welcoming, empathetic environment for their residents and the rest of the WPI community.

“Casey and Matt thought it’d be useful for students to be exposed to new ideas and concepts and learn how to become better allies,” says Goldblum.

Although the organizations’ focuses range from environmental to charitable, each offers invaluable services to the community and its residents, something the RAs got to observe firsthand. The time spent volunteering provided RAs with concrete examples of how individuals’ life experiences can differ due to social identity, faith, race, sexuality, and other factors, and gave them the tools to help them empathize with and support those whose lived realities are different from their own.

Big Brothers Big Sisters matches children with mentors in the community, giving them someone in their lives to act as a role model and support system in addition to their parents. Because the nature of the program is more long-term, RAs assisted with administrative work and learned how to match a child with a proper mentor. Another stop was at the YMCA, where the RAs were able to spend an afternoon with the children, playing games, reading, or just hanging out after a day at school.

"They can use what they've learned to be more confident, empathetic helpers [to their residents] and plan more culturally appropriate and aware floor programs and other events." -Jacob Goldblum

While Wall and Foster were behind the creation and facilitation of the program and Goldblum was in charge of logistics and outlining, Goldblum is quick to credit the entire residential services staff for the program’s success. “It was an awesome team effort,” he says. “The staff has been helpful and open; they gave us the flexibility to pursue something as ambitious as this.”

As students have just recently returned to campus, there hasn’t been much time for the RAs to implement their new skills yet, but Goldblum is confident in how the experience will help RAs more positively impact their residents. “They can use what they’ve learned to be more confident, empathetic helpers [to their residents] and plan more culturally appropriate and aware floor programs and other events,” he explains.

Overall, he says, the students who participated said their knowledge of social justice and diversity increased, and that many of them are interested in continuing to volunteer at some of the sites they visited. The program’s successful first year has given the office a strong framework to build upon in future years. In preparation for next year, Goldblum says that the office hopes to create differently focused tracks based on a student’s prior experience with the program, as well as partnerships with more organizations to give students opportunities to volunteer with an organization that matches his or her individual interests.