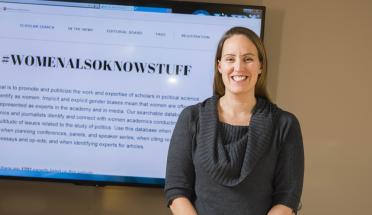 Initiative is creating an online database of female political scientists

The organization Women Also Know Stuff (WAKS) began last year as a nationwide effort to promote political scientists; the kind who just happen to be female.

The group’s founders discovered an underrepresentation of women in political science panels (called “manels” on the WAKS Twitter feed), syllabi, editorial boards, and the like. 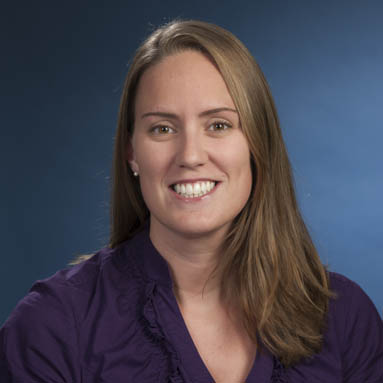 The database puts it all right there for the user—which is the whole intent—promoting visibility of these experts in their field.

A voice at the table

Patricia Stapleton is a new member of WAKS’ editorial board; she’s also a WPI assistant professor and director of the university’s Society, Technology, and Policy Program. She agrees with the WAKS mission.

“There was very little representation” of female poli-sci experts in the media, she says, leading to a potentially skewed public vision of the field as being all men.

Before long, a core group of women grew into a WAKS editorial board of 12 members from all around the nation. The group is funded by the University of Arizona School of Government & Public Policy; Menlo College, and the Scholars Strategy Network. WAKS has some 1,200 members in its registry at last check—a live count that’s always growing on its website—and some 14,000 Twitter followers.

The group’s online presence, said Stapleton—with the website and Twitter—is a needed, broad clearinghouse of information that can be used by educators to access other academics and serve journalists who need experts to quote in stories.

Relevance and diversity were also key in the creation of the online hub, says Stapleton.

“The website came about in thinking about journalists’ interests, our syllabi, and whether we are representing women of color,” she explains, “or—is it only our traditionally represented scholars? Who has the time to [find diverse sources] on their own, if there is a female political scientist to talk about terrorism in Europe?”

The information is all there at WomenAlsoKnowStuff.com. 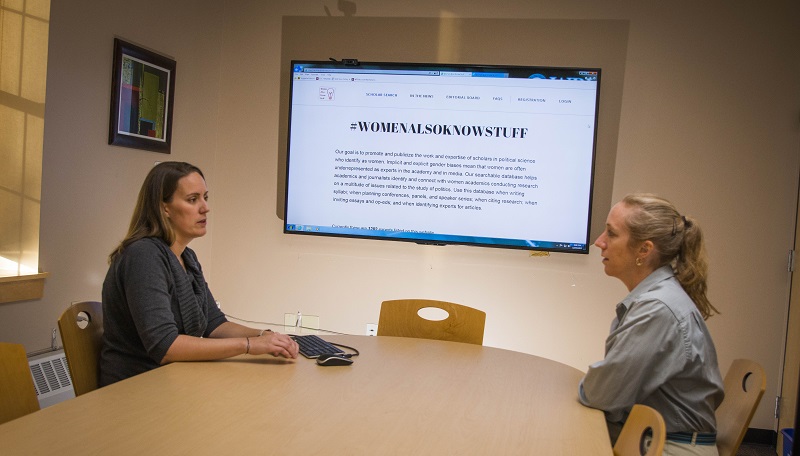 Website users can find experts in such areas as Australia and Pacific Island politics; experimental research; human rights; gun politics; formal theory; comparative political institutions; and many others. Experts can be found by university, country of origin, specific or broad research interest, or by publication.

A Boston or Worcester-area expert on British politics and economics, for example, may be helpful to a reporter with the Telegram & Gazette who is writing an article about Brexit, Stapleton says.

It’s hoped that better showing of the impact of women political scientists will have a ripple effect. The WAKS website and its very active Twitter feed, @womenalsoknow—where users can engage with sources—have other important roles beyond publicizing female political scientists to the media and academia.

They merely begin the conversation. The system is geared toward having writers, reporters, and academic counterparts form long-term relationships with these new sources. The efforts open the way to feature women recommending other women if they are busy or can’t comment on a certain topic due to limited expertise, time-consuming projects under way, or other reasons.

Stapleton is excited by the opportunity to serve on the WAKS board, not only because she’s now helping advance the conversation, but also because the website may inform people about her research at WPI, which broadens the public reach of WPI itself.

So far, says Stapleton, feedback on Women Also Know Stuff has been overwhelmingly positive. Its audience seems to understand that without a vast range of voices on a given topic—such as men and women offer—a true balanced perspective is kept at bay, she says.

“This is a perfect storm allowing us to flourish, and to provide an outlet.”