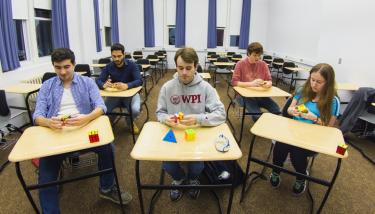 Nope, not how long it takes to tie a tie. Not the perfect amount of time it takes to reheat a slice of pizza in the microwave, either. 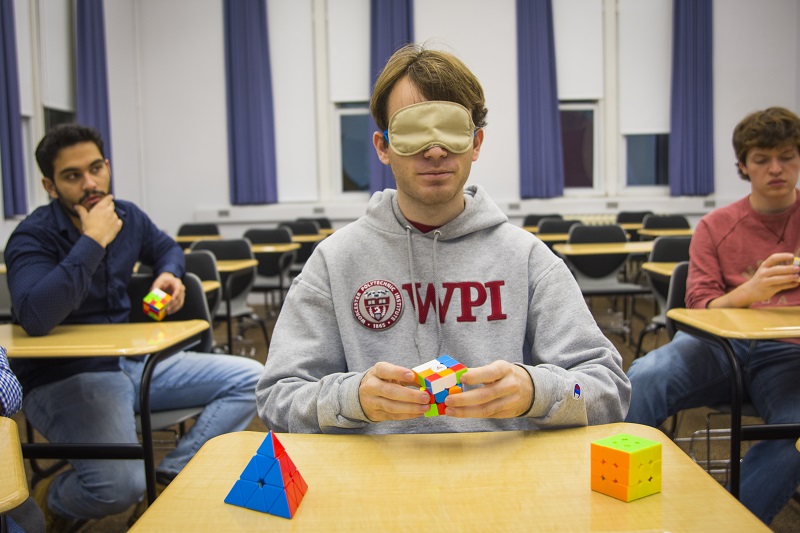 And if that’s not impressive enough, last year, McMillan was appointed a World Cube Association Delegate, making him one of approximately 200 people in the world who can officiate Rubik’s Cube competitions.

“People are often surprised at how easy it is to get into the hobby,” McMillan says. “Solving a cube requires just a little bit of time and instruction, not math or extreme intelligence.”

After arriving at WPI and teaching a few friends how to solve a cube, McMillan was surprised to learn that WPI didn’t already have a Rubik’s Cube club; they soon took things into their own hands, and WPI’s official Rubik’s Cube Club celebrated its one-year anniversary in November.

Each week, McMillan and his fellow cube enthusiasts gather to work toward breaking their own personal records, plan events and more. Last year WPI’s first official Rubik’s Cube competition drew over 100 competitors, as well as the female world record-holder. Another competition is planned for March 2018. The club was also one of 22 locations for FMC Americas, where all participants faced off all at the same time across North and South America to see who could solve a Rubik’s Cube in the fewest number of moves.

And although “Please Be Quiet WPI” might seem like something whispered around campus during a particularly stressful finals week, it’s actually another cube event: competitors go head-to-head to solve 4x4, 5x5, or multiple 3x3 cubes while blindfolded. All records set during “Please Be Quiet” events are officially recognized by the World Cube Association, giving participants the chance to make history (not to mention earning some impressive bragging rights).

“It’s a great feeling when someone is able to master a particular step and really understand what they’re doing, getting them closer to the very end.” -Matthew McMillan

While many students attend club meetings to improve their times and learn more tricks of the trade, McMillan says that novices are also welcome—in fact, teaching others how to solve cubes is one of his favorite memories as the club president.

“It’s a great feeling when someone is able to master a particular step and really understand what they’re doing--getting them closer to the very end,” he says.

Students interested in shaving a few seconds off their fastest solving time, or those who just want to learn the basics with like-minded folks, can email the club for more information on the next meeting.

In the words of the WPI Rubik’s Cube Facebook page, “be there, or be cube.”

This is the second of the "WPI's Got What?" series, highlighting the variety of clubs and organizations at WPI. Check out other clubs that have been profiled as part of the series: