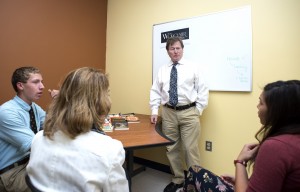 One is a rumination on forgiveness, prompted by the writer’s encounter with an incarnation of the boy who once bullied him.

Another is a poignant remembrance of a 7-year-old girl burdened by the loss of sight.

A third is a treatise on the evolution of Godzilla—a beloved celluloid monster inspired by one the most tragic events of the 20th century: The 1945 atomic bombings of Hiroshima and Nagasaki.

The pleasure of the whole thing is working with the writers. It’s a real luxury to be able to do that.
James Dempsey

These are just a few of the touching, introspective, humorous, and informative pieces that appear in The Worcester Journal, a new literary magazine dedicated to showcasing the work of young writers. Edited by prolific columnist-turned-author and WPI humanities and arts instructor James Dempsey, its debut issue premiered online in late September.

It’s long been a goal of Dempsey’s, who, with a background of 20 years in journalism and several books in his portfolio, knows full well that the best way to hone a craft is, simply, to do it.

“I’ve found that having students write for a real publication makes it much easier to teach them how to write,” he said. “They’re focused on producing something for a real audience, rather than focusing on something to keep the instructor happy. They’re not just writing for a grade, or an audience of one.”

The quarterly online magazine was launched with help from a grant from the Judy and Tony King Foundation. The magazine’s office is at Bancroft School, where Dempsey is serving as writer-in-residence. “I’m most grateful to the foundation and to Bancroft,” Dempsey said. “The school has given me and the Journal the warmest of welcomes.”

Getting the word out about it required casting a wide net to numerous area high schools and colleges, he says, as well as intern programs, homeschooling websites, and even the Worcester County House of Correction. 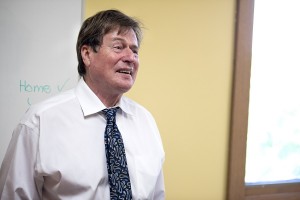 With a focus on creative nonfiction, it features memoirs, historical and cultural essays and criticism, poems, book reviews, and photos from local high school and college students from WPI and beyond. The first issue features the work of students age 16 to 24, although Dempsey stresses that that age range is “not strict by any means. I’m happy to go a little bit above or below that, if I get a good piece of work.”

Hannah Yukon, a Clark University grad student and academic assistant at Worcester State University, is one of the featured writers; her stylized piece “I am like you, I am not like you” recounts the life of her father, who “majored in geology and sacrifice,” and her own upbringing in Singapore and eventual emigration to the U.S.

“Countless boxes checked were ‘other,’ because there wasn’t a space for Mixed American-Chinese Catholic-Jewish girls,” she writes. Then, in America, “where my white roommate asked me why I speak English so well, or what my ‘real name’ was, because Hannah wasn’t Asian enough.”

Other pieces discuss Charles Dickens’ American Notes following his four-month journey through the country; a primer on Bollywood for “the confused and the curious”; an interview with romance writer Susan Elizabeth Phillips; and the life-altering experience of reading Moby-Dick.

But in addition to giving young people a platform to self-express and sharpen their craft, Dempsey says he simply wants to give those who check out the magazine a “decent read.”

“We have a nice variety of stuff, so people can pick and choose,” he says.

And the author, whose most recent biography, The Tortured Life of Scofield Thayer—about Worcester’s native son who published a literary magazine in the 1920s and was analyzed by Sigmund Freud—says he gets as much out of the experience as the students.

He works with each one to germinate and craft ideas, some of which are buried in other prose they submit to him.

“I and the writer are working together to get a piece up to a good level for publication,” he says. “The pleasure of the whole thing is working with the writers. It’s a real luxury to be able to do that.”

And he says he’s been impressed by the caliber of work so far. “I really love the stuff that the writers are producing, to the point where I wish I’d written it myself. It’s a recharge for me in a lot of ways. Finding new talent is a real pleasure, it really is. There’s so much of it.”

Check out The Worcester Journal at theworcesterjournal.com.