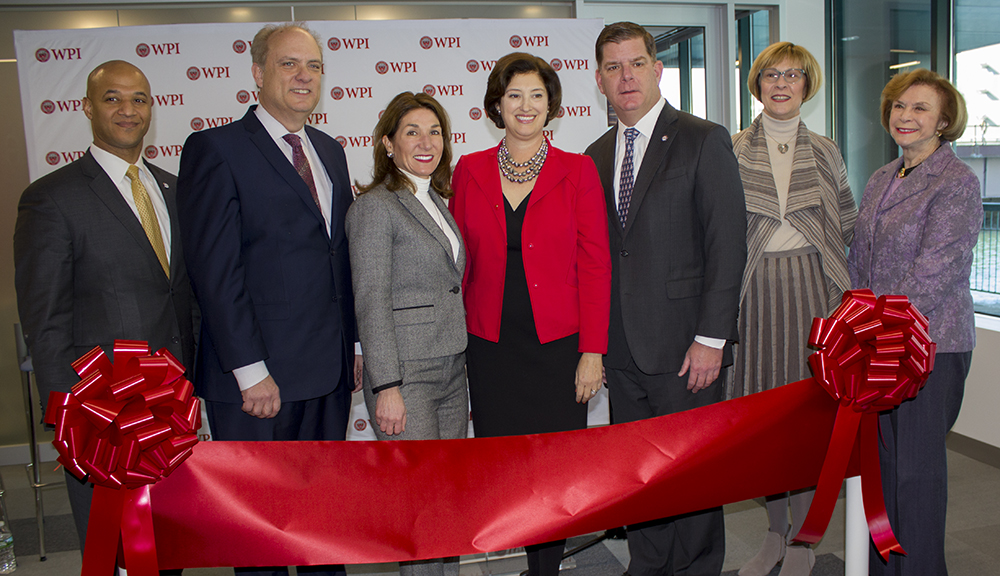 “WPI is playing an increasingly important role in the state’s innovation economy," said Leshin. "We already share so many common interests and areas of expertise with some of the most innovative companies and professionals working in the Commonwealth. Our presence in this neighborhood will allow us to build new partnerships and strengthen existing collaborations. Colleges and universities are critical sources of talent and new business ideas for companies that are hungry to grow. WPI Seaport will connect major companies with similar interests and areas of focus to our high-caliber faculty, researchers, students, and graduates.”

Polito celebrated the opening of WPI Seaport, calling WPI a conduit for education and innovation between the state's two largest cities.

“Academic institutions like WPI and the highly skilled students they train are key reasons why Massachusetts leads the country in innovation,” said Polito. “WPI Seaport will provide students and the university unique access to other institutions, great companies, and leading innovators.”

The Seaport location will complement and expand the many initiatives, projects, and partnerships WPI has currently across the commonwealth. In fact, since 1999 WPI has had a project center in Boston where more than 400 of its students have conducted research and completed 120 projects, working with sponsors such as the City of Boston, Boston Harbor Association, and the New England Aquarium.

“WPI has helped make Massachusetts a powerhouse in higher education, science, and technology, and I’m proud that they will now have a home in Boston,” said Mayor Walsh. “By working together, Boston, Worcester, and WPI will continue to make our state, and our cities, stronger. I look forward to WPI being a resource in this community, and making great use of Boston’s talent and creativity.”

WPI Seaport also aims to add important momentum to the university’s economic development efforts in Worcester. This new location will spur more opportunities and better facilitate relationships that WPI can take back to Worcester in a variety of ways.

“WPI has long been one of Worcester’s strongest allies in both education and innovation," said Mayor Petty. "We know that the relationships the university builds here will benefit so many of our partners in the heart of the commonwealth. We are a city with so much to offer, and we’re grateful that WPI is representing us here in the capital city. We look forward to what the future holds for us all.”

The 6,400-square-foot location was specifically designed with collaboration in mind. The layout features an open area that is adaptable to accommodate and encourage collaboration among students, industry partners, business leaders, and many alumni—including WPI’s Tech Advisors Network, which guides and mentors the university’s aspiring entrepreneurs. The space also includes a classroom, a conference room, and five technology suites, all of which are framed by a wall of windows offering sweeping views of the city’s Fort Point Channel.

In addition, WPI will use the new location to host industry-centric events in support of business development and the university’s rapidly growing research enterprise. Career fairs, alumni gatherings, and a number of lectures and classes are also planned for the Seaport location.

Hear What Officials Are Saying at WPI Seaport