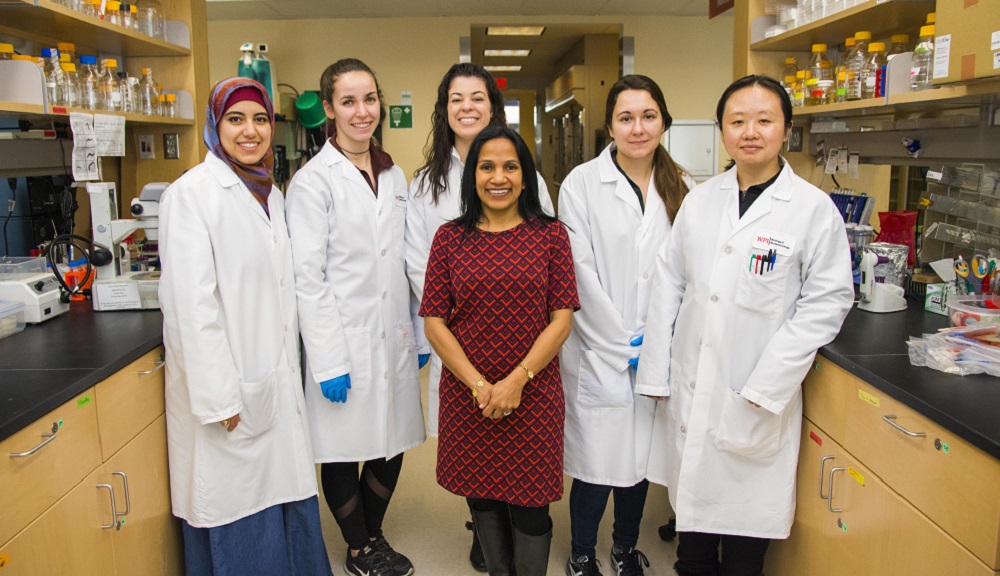 Reeta Rao Discusses Her Work, Being Elected to American Academy of Microbiology

Biology and biotechnology professor says election “brings pride—not just to me, but to the entire community”

When Reeta Rao was a child, her bedtime stories didn’t include fairy tales or princesses. Instead, she yearned to hear her mother’s reminiscences as a doctor at the local hospital in India.

“I wouldn’t fall asleep if I didn’t have a story from my mother,” says Rao, associate professor of biology and biotechnology. “In retrospect, it was clear from an early age that I was drawn by the ‘why’ rather than the ‘find-a-fix’ aspect of disease.”

Rao is one of 96 fellows elected to the American Academy of Microbiology, a leadership group within the American Society for Microbiology, elected annually through what the group terms a “highly selective, peer-review process, based on applicants’ records of scientific achievement and original contributions that have advanced microbiology.” There are more than 2,400 fellows across the world, representing all subspecialties of the microbial sciences and involved in basic and applied research, teaching, public health, industry, and government service.

Being nominated a fellow by her peers and mentors is a gratifying honor unto itself, Rao says. But to be elected is a recognition of her seminal research findings around understanding and managing fungal infections, she adds. “I share this recognition with my colleagues and, especially, my students because something like this brings pride—not just to me, but to the entire community.”

She is passionate about crediting those who’ve guided her along the way, whether it be her mother or teachers. In fact, she places much importance on making sure she serves in the same capacity as a mentor to her students. “It’s so important to have the right role models and mentors. I care deeply about my students and their professional development,” she says. “This gives me a chance to pay it forward.”

“I share this recognition with my colleagues and, especially, my students because something like this brings pride—not just to me, but to the entire community.” -Reeta Rao

Rao grew up in Odisha, India, where her mother was a doctor and her father an engineer. She earned a BS in pharmacy at the Birla Institute of Science and Technology in Pilani. She went on to Drexel University in Philadelphia to earn an MS in bioscience and biotechnology, and an MS in environmental sciences. Later, she earned her PhD in biochemistry and molecular biology at Penn State University Medical College. She completed her postdoctoral fellowship at the Whitehead Institute for Biomedical Research in Cambridge, Mass. Her resume is extensive, including service on many WPI committees, and numerous honors and awards, including a patent; and membership to national organizations such as the American Association for the Advancement of Science, Genetic Society of America, and National Association of Inventors.

At WPI, Rao’s research focuses on fungal pathogens, specifically the dynamic and complex interaction between the microbial pathogen and the host immune system. The clinical significance is underscored by the fact that infectious diseases remain the leading cause of death.

Despite all the academic and research recognition she has achieved, Rao seems particularly touched when noting that her son, Neel, 13, shared the news of her being named an AAM Fellow at school. “I thought a tiny part of him must be proud because he told his science teacher,” says Rao with a laugh.

In fact, Rao recounted how Neel had reported back to her his teacher’s response: “She thought you were really cool.”