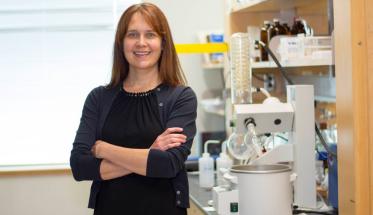 With the R35 award, designed to encourage investigators to embark on long-term projects of unusual potential, Anita Mattson will explore a new class of catalysts that could be useful tools for discovering new drugs for cancer and many other diseases

Anita Mattson, associate professor of chemistry and biochemistry at Worcester Polytechnic Institute (WPI), has received a $1.7 million award from the National Institutes of Health (NIH) to develop a new class of catalysts that could make it possible to reliably synthesize organic compounds that hold the promise of treating cancers that have become resistant to commonly used chemotherapy medications. The catalysts may also open the door to a new approach to discovering new drugs for cancer and many other diseases.

Mattson’s grant from the NIH, known as an R35, is a relatively new award reserved specifically for early stage investigators whose research shows exceptional promise. The agency says the awards are designed “to provide long-term support to an experienced investigator with an outstanding record of research productivity. This support is intended to encourage investigators to embark on long-term projects of unusual potential.”

Drug resistance is a common and intractable problem in chemotherapy. Too often, cancers that at first respond well to commonly used treatments suddenly begin to grow again. The problem is often complicated by deficiencies 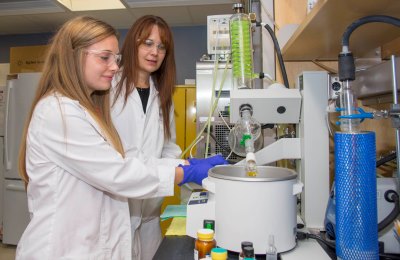 that inhibit the body’s own anti-cancer immune response.

Among the drugs that can lose their potency is cisplatin, which is often the first line of treatment for a range of cancers, particularly tumors of the lungs, ovaries and testes. Cisplatin works by damaging the DNA of tumor cells; if the damage is bad enough, the cells—unable to make repairs—undergo programmed suicide, a process known as apoptosis. In time, some tumor cells seem to adapt and resist the effects of the drug.

In her research, Mattson is focusing on a group of naturally occurring molecules known as dimeric chromanones. Derived from various strains of fungi, chromanones have high biological activity, which makes them attractive targets for drug discovery. Some, like cisplatin, appear able to induce apoptosis in cancer cells; some also seem to stimulate the cancer immune response. Because of these properties, Mattson says chromanones could become powerful dual-action treatments for drug-resistant cancers.

The challenge, she said, is that chromanones have proven to be extremely difficult to synthesize. They are known as chiral molecules because they have stereogenic centers, making it possible for them to form as one of two mirror-image compounds called enantiomers. Only one of the isomers may have the desired biological activity. Until now, options for reliably controlling which isomer forms have been limited. 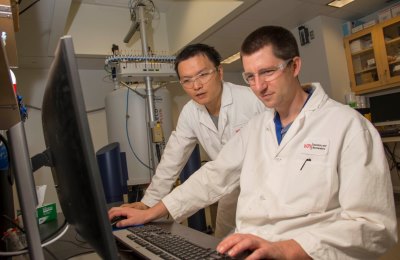 ​Mattson believes the answer may lie in a group of organic compounds known as silanediols, which are commonly used to create polymers for health and beauty products. In previous research, funded by the National Science Foundation, Mattson and her team became the first researchers to consider using these compounds as catalysts. In the process, they made an important discovery: silanediols have the ability to access and control the molecular structure of a number of difficult-to-synthesize compounds, which like chromanones, have stereogenic centers.

“We saw a limitation in the literature,” she said. “We tried to address it, and in the process made some exciting discoveries. We are now seeing if we can take those discoveries one step further into the anti-cancer drug discovery area.”

Mattson’s group was the first to show that the ability of silanediols to recognize anions in other molecules and to act as so-called hydrogen-bond donors made them potential enantioselective catalysts. In an essay published in the Nov. 10, 2017, issue of Science (“Tricks for noncovalent catalysis,” vol. 358, no. 6364), Mattson comments on the growing family of hydrogen-bond-donor catalysts, including silanediols, which may open the door for the development of a wide range of new pharmaceuticals and agrochemicals. A better understanding of the anion recognition and hydrogen-bond–donor processes, she says, “should inspire the discovery of new catalysts combinations and their associated methods for complex molecule construction.”

With the NIH funding, Mattson hopes, first, to demonstrate that silanediols, by acting as hydrogen-bond donors, are able to control the synthesis of chromanones so that the process produces only the desired stereoisomer. The next step will be to build a library of new chromanones that can be tested for their activity against various cancers, including chemotherapy-resistance cancers, in collaboration with researchers at the University of Massachusetts Medical School.

She says she believes these novel molecules can also be useful tools for better understanding the biological pathways associated with chemotherapy resistance, which could open the door to further drug discovery. “Cisplatin works by one mechanism of action, and that mechanism is not effective against resistant cell lines,” she said. “There are very likely many other mechanisms for targeting cancer cells. If we can determine what they are and identify the biological pathways that are associated with them, that could give us new targets for anti-cancer drug development.”

Because chromanones have been shown to have activity against a wide range of diseases, including malaria, and can also be effective antibiotics, Mattson says the tools she and her team are developing may prove useful in drug discovery, generally, and not just in the development of cancer medications. “We have been developing these tools and our understanding of silanediols for several years now,” she said. “It is thrilling that we have now found a truly exciting and useful application for them.”