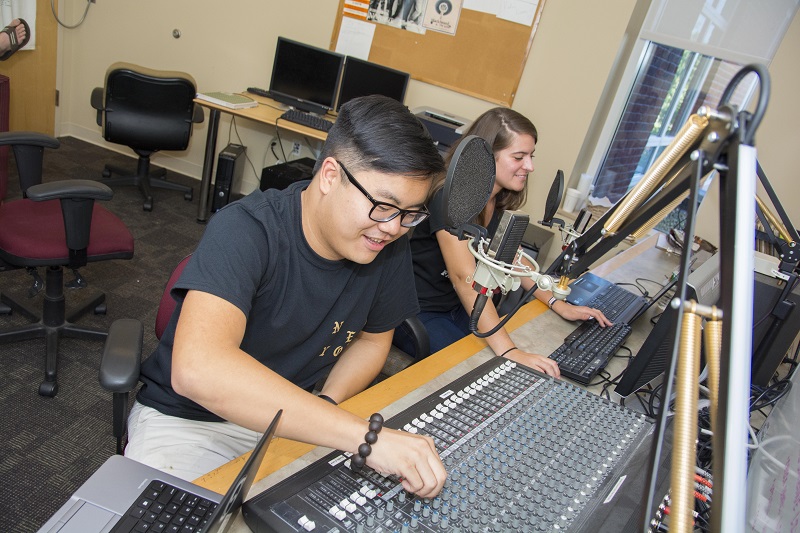 WWPI Offers an Inside Glimpse into the Music, Quirky Issues of College Life in 2016

With a free-range approach and enthusiastic DJs, WPI's campus radio station, WWPI, offers an inside glimpse into the music, the thought processes, and the quirky issues and phenomena that make college life in 2016 what it is.

According to Julie Valim '17, general manager and president of WWPI, the airwaves are filled with everything from traditional to off-beat. And thanks to being internet radio, listeners can tune in just about anywhere at radio.wpi.edu.

Student DJs sign up for available slots, giving them an uninterrupted hour to play tunes that suit the DJs' and listeners' tastes or to talk about arcane or hotly debated or just plain funny topics, says Valim.

About three dozen students, from first-years to grads, fill one-hour slots each day of the week for 11 or 12 hours a day. During times when the studio is empty, an automatic DJ fills the airwaves.

Valim says her own show is a constantly rotating list of music that she works hard to keep varied and appealing. Describing her show as one of electronic or indie music, the computer science major says she especially likes Alt-J, Warpaint, and Tycho. She debuts new playlists every week, which are so diversified she rarely plays the same song or artist during a single school year.

But other DJs mix it up.

Max Hongming Li '17, has been on the station's executive board for a year and a half and says the three years he has been involved with WWPI have turned his interest in music up a notch to a real hobby. “I do a music show, using music from all over the place, though I guess my focus has been soul, hip hop, and electronic really,” says this ECE major. “I just play music I like, usually trying to stick to some sort of theme or flow.”

Prime slots are generally from 2 to 8 p.m., says Valim, when students are usually done with classes so they have time to be in the booth and their friends are available to listen. And some shows are not what you'd get on popular commercial radio.

One of Valim's favorite shows was by a student who broadcasted tutoring in Spanish, so listeners got a quick lesson. Another DJ was known for getting into the booth and playing Netflix choices—a modern version of Prairie Home Companion. One DJ read fan fiction stories and another turned vinyl.

“There's lots of creativity,” says Valim. “For me, personally, it's gotten me to explore music a lot more. Now that I have a show and have to produce playlists every week, I am proactive in looking for music. It has broadened my range, for sure.”

Tucked into a small studio room on the second floor of the Rubin Campus Center, WWPI DJs work out of a booth equipped with a computer (for those who don't bring their laptops along), a sound table for adjusting volume, a turntable, comfy seats, and a small trove of classic vinyl. They can bring a couple of friends in or invite people to be interviewed, and some shows with a DJ duo can run for two hours instead of the typical one.

“This is another outlet for students,” says Valim, who likes to have friends in the studio when her show is on. “The club isn't a huge commitment and they can have fun. This forces you to be creative in a different way.”

And it helps to get to know people who enjoy the same things, says Li. “The campus is a big place with clubs that fit pretty much any interest one could have,” he says. “I’m just glad to have found one with people with similar interests and attitudes.”

The club's reputation has grown in recent years and they now supply music and entertainment for some on-campus events. You'll hear their music at the Greek Carnival on the quad and they've also played music at Club Maxine and for a national meeting for civil engineering honor students.

Students come into the club for different reasons, says Valim. Li agrees. “The other thing is the benefit it has on the actual members of the club,” he says. “While the shows have a variety of listener counts, the act of doing a radio show is pretty therapeutic on its own, at least in my opinion. With the crazy workload that college can bring, playing my show gives a brief moment of reprise, where I can just chill and focus on something else, like the music, or talking for people who do talk-based shows.”

Some of the DJs are just drawn to the music or the talk show aspect, but others are also looking to the future to see how this could fit into their lives. As for Valim, she's considering establishing a podcast after graduation.

Whether you're a listener or a DJ, WWPI is worth exploring. “No matter what you like," says Valim, "you'll enjoy something that WPI radio has to offer.”