Radio station WICN has a product it’s very proud of, its programming, which includes something that is increasingly hard for listeners to find these days – lots of jazz. 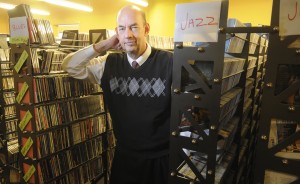 Worcester’s public radio station would like to expand its membership, reach more listeners and beef up financial support, but it operates on a tight budget that makes it tough to tackle such projects.

Enter WPI, which is conducting a membership survey and plans to develop a mobile application for WICN, making its programming, and probably much more, available to people on their phones and tablets.

“These are very important projects for us that we couldn’t do ourselves,” says Gerry Weston, general manager of WICN. “I have to be very careful how we spend our dollars. Having WPI come to the forefront, to step forward, is huge for us.”

Scott Barton, an associate professor in Humanities and Arts and a composer who teaches music courses, says supporting the school’s collaboration with the radio station was part of his mandate when he came to WPI last year.

This month, which happens to be Public Radio Music Month, WPI is wrapping up the research phase of its work with WICN. That includes a survey to gauge member preferences and to see what they might like in a mobile app.

Besides streaming broadcasts to phones and tablets, the app could include schedules of events and guides to content, and enable listeners to hear shows they’ve missed and provide feedback, according to Barton.

MBA students began market research and what might be needed in an app, beginning in January. Using that information, computer science students can develop the app, which should take place in the next year.

Though he just recently moved to the area, Barton says he’s a WICN listener himself, and he notes the dearth of jazz programming elsewhere, including WGBH in Boston, which has drastically cut the hours it devotes to music, including jazz.

“There are people out there in the world that would enjoy this content,” he said of WICN’s programming. “But if they don’t happen to live in a community in the Worcester area, or they are commuting at odd times, or for whatever reason they’re not able to access the content in traditional ways, that’s where technology can step in and allow them to get the content.”

Other WPI/WICN projects include managing the station’s database and expanding its broadcast signal into Boston, according to Barton.

The projects provide learning for WPI students and value for WICN, which Barton calls “the ideal outcome of this partnership.”

Weston also is relatively new to the area, coming to the Worcester position after a public radio stint in Maryland and 27 years in Louisville, Ky., where he merged that city’s three public radio stations under a single, nonprofit umbrella.

“Worcester reminds me of Louisville in many positive ways,” he said. “Anytime you come to a city and see cranes, you know there’s activity, there’s building, there’s movement.

And it’s not lost on Weston that WICN studios on Portland Street lie smack in the middle of city’s proposed arts district.

“We could be broadcasting from a hot air balloon,” he said, “but it’s very important to be seen as part of downtown.”