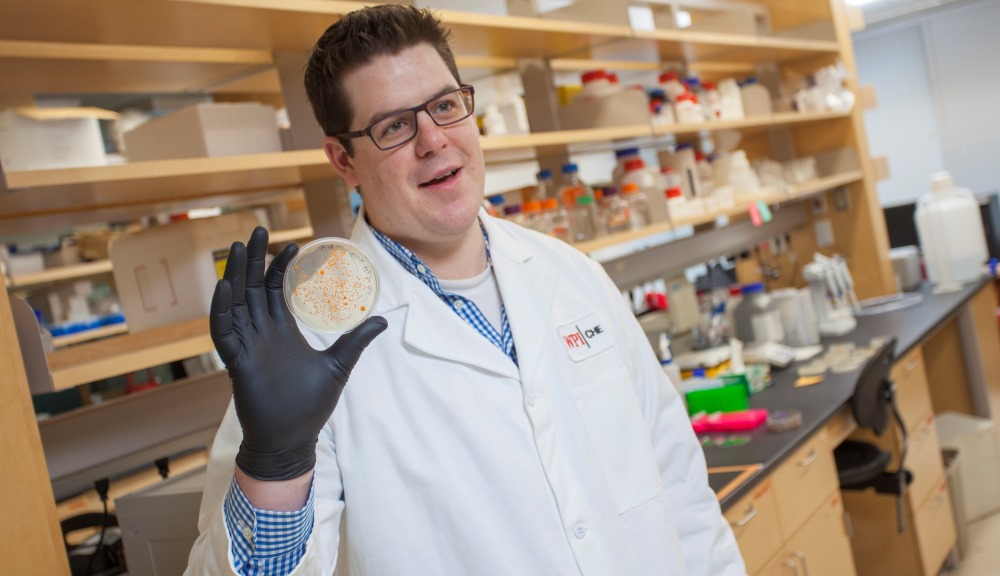 In partnership with scientists from Raytheon and other universities, Eric Young is helping develop a method for using DNA signatures to identify genetically engineered organisms that have been accidentally or intentionally released beyond the lab and into the environment

If a genetically or synthetically engineered organism is released into the environment, how will we know? How can we tell it apart from the millions of microorganisms that exist naturally in the wild? That’s the challenge being taken on by a multi-institution research team, including Eric Young, assistant professor of chemical engineering at Worcester Polytechnic Institute (WPI), that is developing a biosecurity tool that can detect engineered microorganisms based on their unique DNA signatures.

Genetic engineering, in which genes are added to the genomes of organisms, and synthetic biology, which focuses on understanding and designing better DNA sequences, are both used today to make a wide array of products, such as pharmaceuticals, like insulin, and agricultural crops. Genetic engineering also is used by biotechnology companies—from start-ups to multinational corporations—to manufacture products like detergents, food ingredients, and biofuels.

For decades, the U.S. government has sponsored research on and development of engineered organisms and better ways to design DNA, while the government and the synthetic biology community have worked together to develop safety and ethical practices to ensure the organisms that are made are safe and can be contained. For example, the government has sponsored the development of “kill switches” that make it impossible for engineered organisms to survive outside the lab.

Recently, the U.S. government and research scientists have identified a need for new tools that can identify engineered organisms when they are mixed in with a myriad of naturally occurring microorganisms. These tools could eventually be deployed to detect engineered organisms in the environment. They could be used to protect a company’s intellectual property should an organism it designed accidentally escape the lab or to detect intentional releases of potentially harmful organisms.

This is the task being taken on by the multi-institutional team charged with developing such a tool. The project is funded by an 18-month award from the Finding Engineering Linked Indicators (FELIX) program, which is run through Intelligence Advanced Research Projects Activity (IARPA), an organization within the Office of the Director of National Intelligence that funds research to address challenges facing the U.S. intelligence community. The award has a second phase that could be renewed for an additional 24 months. Raytheon, a Massachusetts-based defense contractor, is the primary contractor; Young, who has received a $377,746 award for his part of the project, is one of five subcontractors. The others are Johns Hopkins University, Princeton University, University of California at San Francisco, and Mission Bio, a San Francisco-based biotech company.

“My lab is developing engineered organisms to solve problems, and we use safety practices beyond what we are required to use,” he added. “Hopefully, this project will lead us to a low-cost tool that we can use to make sure everyone is working to prevent the release of organisms into the environment, from universities to manufacturing plants to DIY bio enthusiasts in their garages.”

Scientists create engineered microorganisms by introducing new genes into their genomes that enable them to produce valuable drugs, biofuels, or food products. A bacterium containing the human gene for producing insulin, or a yeast bearing multiple genes from several organisms to make the antimalarial drug artemisinin are examples. Because many of the genes in these engineered organisms exist in nature, telling them apart from non-engineered organisms in soil or water samples can be challenging. “It’s akin to finding the proverbial needle in a haystack,” Young said.

He added that the key to making that distinction will be identifying genetic signatures for each organism. By virtue of the way they are produced, the majority of genetically engineered organisms have one or more short sections of DNA that are unique to their genomes and make them different from their non-engineered cousins. These DNA signatures can be used as markers to quickly spot an engineered organism in a population of naturally occurring microorganisms. Young’s role in the research project is to generate examples of bioengineered organisms that contain these specific markers.

“We are supplying the ‘expert’ information the detection device will look for,” he said. “We are taking into account the genetic engineering of the past 50 years and reducing all of that knowledge and information down to a set of essential signatures for bioengineered organisms that we would most likely need to find. It’s up to our sponsor and the team to decide which organisms are important, and we help decide what signatures we have to look at. It’s very exciting work.”

Initially, Young, who is working with two graduate students, will focus on brewer’s yeast, which he says is increasingly becoming the organism-of-choice for bioengineering companies because it is easy to engineer and simple to grow, given the decades of large-scale fermentation experience in the brewing industry. The signatures he is identifying will be useful for detecting known engineered organisms that may have come from corporate and university labs. Detecting potentially harmful organisms that may have been intentionally released into the environment will be a greater challenge.

“It’s a whole lot more complicated when you don’t know what organisms you might need to look for,” he said. “We have to think about what is most likely to be out there and what would somebody with limited resources create. We need to create tools that can detect a wide range of engineered organisms. And they need to be flexible enough that they could detect a specific set of signatures but then detect newly added signatures as they are found. We are helping develop a technology to do that.”

The knowledge Young is generating will ultimately be incorporated into a benchtop detection device that will be developed by other members of the research team. Other team members are creating machine learning algorithms that will find new signatures that experts may not identify. Young said he expects a usable detection device for yeast will be ready at the conclusion of the program, but it could be five to 10 years before the more complex challenges are solved.