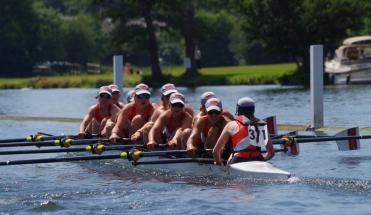 WPI Competes at the Henley Regatta

WPI men’s and women’s rowing teams have had a jolly time competing this month in one of the most revered and renowned rowing events, the Henley Regatta, which comes to a conclusion July 5 in Henley-on-Thames, England.

The older of the two events is the Henley Royal Regatta, in which the WPI men’s team made the initial cut and competes for the Temple Challenge Cup June 28–July 5. They will row in a field of nine teams that includes Williams College, Cornell University, Santa Clara University, University of Virginia, Oxford Brookes University, Pembroke College (Oxford), Trinity College (Dublin), and University of London 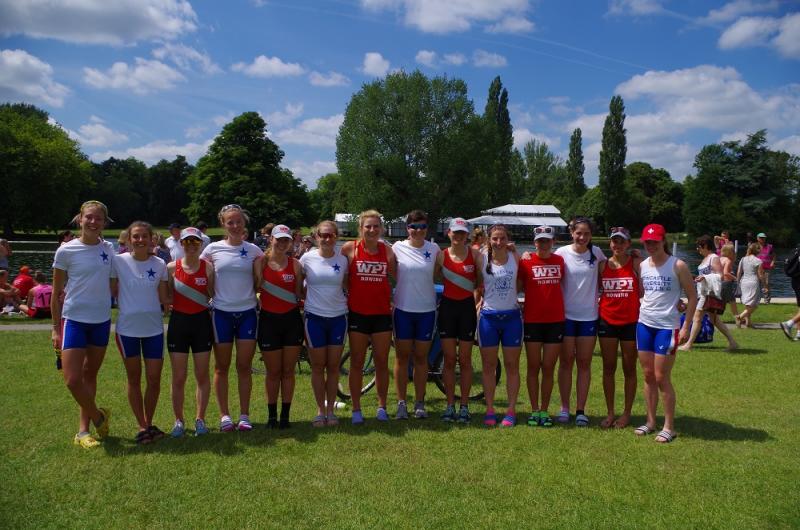 The women’s eight team (eight rowers and coxswain) made it to the quarterfinals of the Henley Women’s Regatta (HWR) Senior Eights, held June 16–18, before falling to Newcastle University. The other teams competing for the GP Jeffries Cup included St. Joseph’s University, Northeastern University, Harvard-Radcliffe—and Molesey Boat Club, which took the trophy.

The WPI men’s team fell to Santa Clara in the regatta’s Temple Challenge Cup on June 28, in the single elimination competition.

According to the Royal Regatta website, the men’s event was first held in 1839 and has been held annually ever since, except during the two World Wars. Originally staged by the mayor and people of Henley as a public attraction with a fair and other amusements, “the emphasis rapidly changed so that competitive amateur rowing became its main purpose.”

The HWR launched in 1988. Sarah Wutka ’18, of the WPI women’s team, calls racing at Henley “a once-in-a-lifetime opportunity.”

“It’s been so incredible and a great way to end such a strong season and to start building the base of an even stronger upcoming year,” she says.

The HWR also allowed Wutka and her teammates to have a different racing experience than the one they have at home.

“There is a different focus on racing in England—it's a battle, not a race. We raced head-to-head with just one other boat, compared to Worcester, where we race up to six other boats at once. [At Henley] it was simple. You either win or you lose. Henley was also different because we raced crews that we had never heard of or hadn't raced before and would probably never race again,” she says.

Wutka’s teammate Gina Gonzalez-Roundey ’18 concurs. “To race at Henley is a very prestigious and immediately rewarding experience," she says. "I'd say the main difference from our races back home is that at Henley you know every single crew is experienced and are great rowers. I believe because of this it automatically held us to a higher standard than what we were used to, and made us better rowers because of that.”

“To race at Henley is a very prestigious and immediately rewarding experience ... at Henley you know every single crew is experienced and are great rowers. I believe because of this it automatically held us to a higher standard than what we were used to, and made us better rowers because of that.” -Gina Gonzalez-Roundey

The WPI women’s team ranks 9th in the U.S., according to coach Jason Steele, and he expected the team to do well at the HWR, even though—as an international crew—the team is required to race in one of the highest categories.

“This is the strongest eight we’ve brought here,” says Steele. “We consider it a great opportunity and learning experience, and we build it into our training on a three-year cycle.”

According to NCAA rules, teams can only make one international trip every three years. WPI’s men’s and women’s teams last competed in the Henley Regatta in 2014.

“We hope this lays the groundwork for a strong season, as all but two athletes will continue next year,” Steele says.

Thirteen women were selected for the HWR team, and they took their mission seriously, says Steele. Though the regular season ended May 11, the women’s team continued to train locally, rowing at 6 and 10 a.m. daily through June 4, their departure date for England. Once across the pond, they continued their regimen, rowing at 9 a.m. and 3 p.m. daily. 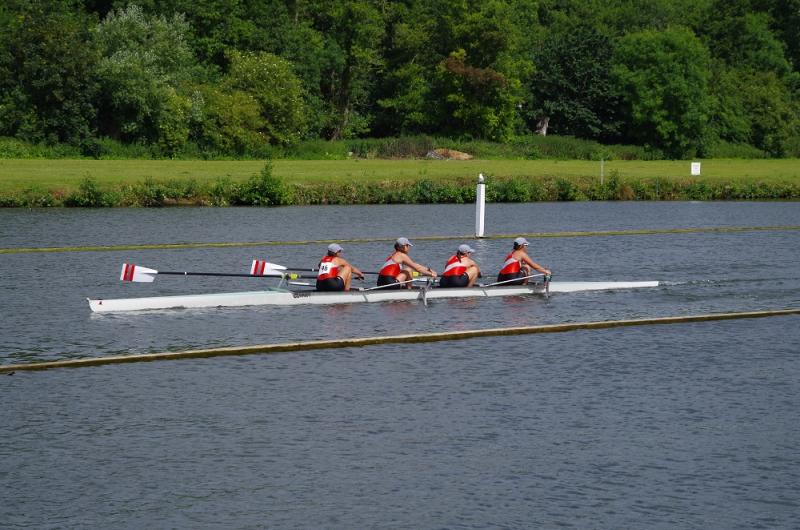 Members of the women's rowing team during a practice.

According to Steele, aside from the “gladiator” style of one-and-out racing, the primary difference between rowing in the NCAA vs. Henley is the distance, 2,000 meters vs. 1,500 meters, respectively.

“For that reason, the training is similar, but we put a bit more emphasis on creating peak speed, since there is less time to get an advantage over the competition,” he says.

Besides training and racing, the women’s team has been able to explore England in a variety of ways that will make the trip even more unforgettable, says Wutka.

“One of the most memorable times, besides racing, was our long row from Henley to Reading. It was about a 15K row through the English countryside. We had to row through four locks, which was an incredible experience.

“We also traveled to Oxford and London on our one off day to explore different areas of the country, and took the time between practices to explore the Henley-on-Thames and get familiar with the local flair,” she says.

Gonzalez-Roundey enjoyed talking with the locals, especially about rowing.

“Rowing is a better known and appreciated sport [in England], especially in Henley. It was a very cool change compared to the US, where probably the majority of people don't actually know anything about the sport,” she says.

The experience fits in well with her overall WPI education, though, at the university as well as at Henley. “You are held to a higher standard," she says, "and simply expected to be greater than what you were a day ago, every day.”