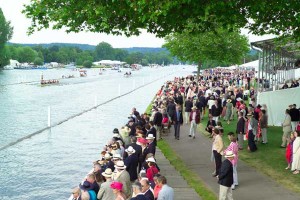 WPI’s varsity rowers, both men and women, are headed across the pond to a new body of water: the River Thames. They plan to take part in regattas both in Reading and in Henley-on-Thames.

For the American college students, the experience offers the opportunity to race against the elite of the rowing world.

Established in 1839, the Henley Royal Regatta, for men, acquired royal patronage in 1851; the competition is world-class. The 25-year-old Henley Women’s Regatta, held two weeks earlier, was founded to create a comparable regatta for oarswomen on the Henley reach.

“Henley is special,” says Jason Steele, head coach of women’s crew.  “It’s right up there as one of the most cherished events in the world of rowing.”

His team, taking two eights, left on June 9 for England, where they will live and breathe rowing—practicing, racing, and observing. Also traveling are assistant coaches Martha Strom and Pat Guida, and strength and conditioning coach Paul Berube.

They will row first at the Reading Amateur Regatta, held June 14-15, followed by the Henley Women’s Regatta from June 20-22.

The men’s team, taking an eight and two fours, departs on June 22. They, too, will row first in Reading and then in the Henley Royal Regatta, held July 2-6. (They may end up having to qualify for Henley, which would require racing for a spot on June 27.)

Head coach Larry Noble will go with the men, along with assistant coaches Bryan Pursell, Garrett Cavanaugh, and Jim MacDonald. Clark crew coach Mike McDonald will be their boat man.

The 2014 teams are not the first WPI rowers to go to Henley. Noble took students in 2009 and vowed then to return every four or five years. 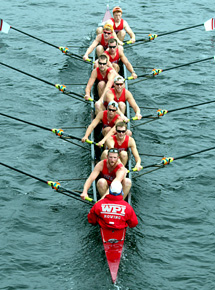 Although they didn’t advance in the single elimination regatta, the exposure to such fierce competition—as well as British culture—was “a life-changing experience,” he says.

The WPI women went in 2011, in a group that included four first years, some of whom are now returning as seniors.

Steele, too, has made a commitment to return every three years.

The students have worked hard all year for this trip, not only on the water but also by raising funds through raffles and solicitations for donations. Crew endowments supplement the fee paid by each rower.

“They’re great kids,” says Noble. “They’re so motivated and they work so hard.”

Training for the Henley adds valuable weeks of practice to a short spring season, and both coaches saw positive results in performance after they returned from Europe the last time.

“The 2011 trip started to allow us to move to a more competitive level,” says Steele.

Both men and women have had solid seasons this year, with the men’s second varsity eight placing second in New England and the women’s varsity eight ranked twelfth in the country in Division 3.

“It’s a competitive bunch,” says Steele. “We’re focused on the developmental part of it, but we’re also going there to attempt to have success. At worst, it will be a great experience with a lot of extra training.”