WPI History Professor Will Teach in Japan as a Fulbright Scholar 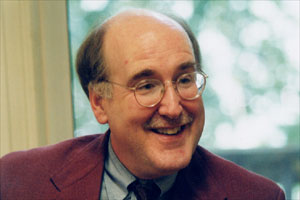 "Your impressive academic accomplishments have made possible your selection for the Fulbright Program," wrote Alan Schechter, chairman of the J. William Fulbright Foreign Scholarship Board in a letter informing Bullock of the honor. Schechter noted the WPI professor will join the ranks of "some 225,000 distinguished scholars and professionals worldwide who are leaders in the educational, political, economic, social and cultural lives of their countries."

Accompanying him on his upcoming sojourn are his wife, Sylvia, who will take a year off as a teacher at the Bancroft School, and 9-year-old son Christopher. Bullock notes that one Japanese influence in particular holds appeal for his son: "He loves Pokemon toys."

The family will live in Okinawa, a subtropical island and a major vacation destination in Japan renowned for its scuba diving. But beyond the beauty of his surroundings, Bullock will focus on teaching American history at Japan's Ryukyus University.

"Part of what is exciting for me is being an American historian whose experience and work has always been local," Bullock said. "So I'm happy about making that international connection."

He will navigate an educational system very different from that at WPI.

"WPI is odd in its use of seven-week terms (compared to other U.S. universities) but Japan is wholly different," he said. "Students there take 15 to 20 courses at a time but they are not based on doing homework. For the most part, it is just classroom work. So I will meet once a week for 90 minutes and the norm is, I will speak the whole time. Discussion is not necessarily normal. But I'll see what happens when I try to get them to speak."

Bullock has earned a series of history degrees, concentrating on American history, from Houghton College (B.A., 1978), the State University of New York at Binghamton (M.A., 1980) and Brown University (Ph.D., 1986). He taught at Lawrence University, Vassar College, the University of Massachusetts at Boston and SUNY Binghamton before joining the WPI faculty in 1989.

At Vassar, he won a yearlong American Council of Learned Societies Research Fellowship and, in 1992, he received another yearlong fellowship from the National Endowment for the Humanities. He also has won a fellowship from the Massachusetts Historical Society and has been elected to the American Antiquarian Society.

His research and teaching focus on colonial and Revolutionary America, the early American republic, American social and cultural history, and freemasonry.

He has advised student projects at nearby Old Sturbridge Village through WPI's Living Museums Program and has been an on-camera commentator for the History Channel's "The Secret Brotherhood of Freemasons," a historical documentary part of the "In Search of History" series. The television program traced the role of the Freemasons fraternity in the American Revolution and the country's early history.

Recent publications include his critically acclaimed 1996 book, "Revolutionary Brotherhood: Freemasonry and the Transformation of the American Social Order, 1730-1840"; "'Sensible Signs': The Emblematic Education of Post-Revolutionary Freemasonry," in "A Republic for the Ages: The United States Capitol and the Political Culture of the Early Republic" and "A Mumper Among the Gentle: Tom Bell, Colonial Confidence Man" in William & Mary Quarterly. He contributed several chapters to "A Reader's Guide to American History."

He has made presentations at historical symposia throughout the country and will speak at the Charlotte (N.C.) Museum of History before leaving for Japan in early September.

The selection process for a Fulbright scholarship involves intense competition. For more than 50 years, the Fulbright Program has been recognized as the flagship in international education exchange. It is sponsored and funded by the U.S. Information Agency and participating governments and host institutions in the United States and abroad.