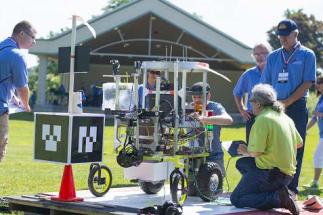 Teams from around the world will compete at WPI for $1.36 million in NASA prize money

For the fifth year in a row, Worcester Polytechnic Institute (WPI) and NASA will team up in pursuit of new technological solutions for America’s space program and for planet Earth. WPI is hosting Level 2 of the Sample Return Robot Challenge, the only university to partner with NASA for this competition since it was launched in 2012.  As mentioned in NASA’s media advisory “After five years of competition by more than 40 different teams from around the globe, NASA’s Sample Return Robot Challenge has reached its final stage. The top seven teams will compete for the $1.36 million prize purse on the campus of Worcester Polytechnic Institute (WPI) in Worcester, Massachusetts, Sept. 4-6.”