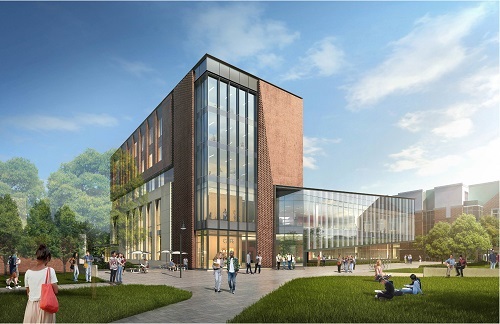 Today, at a groundbreaking ceremony for the future Foisie Innovation Studio, Worcester Polytechnic Institute (WPI) announced that, thanks to alumni support, the university met the George I. Alden Trust Challenge.

In October 2014, WPI Alumni launched a fundraising project to help fund the creation of the Foisie Innovation Studio, the future hub of WPI’s distinctive project-based approach to STEM (science, technology, engineering, and math) higher education. In January 2015, WPI received a $3 million challenge grant from the George I. Alden Trust—a pledge that would be fulfilled only if WPI alumni raised $9 million in 18 months.

All told, $18 million has been raised to make the Foisie Innovation Studio a reality. Prior to the challenge grant, $6 million was raised from 250 donors. Following its launch, the Alden Trust Challenge inspired 1,300 donors, some first-timers, and some who hadn’t donated in years, to contribute to the project.

“The Alden Trust Challenge was a creative and fun way to engage donors around a common goal for an exciting purpose,” said WPI President Laurie Leshin. “The funds raised in this campaign support what will be a transformational addition to our campus. The Foisie Innovation Studio will be a hub of activity where the members of our community can work together, sharing knowledge and making discoveries that will better our world. The Alden Trust has long been a generous and enthusiastic supporter of WPI whose support of this project gave a certain ‘stamp of approval.’ This challenge was a tremendous inspiration to many of our trustees, as well as other community members. We are so grateful and excited about what is to come.”

“WPI fully seized the opportunity to meet this challenge, and the Alden trustees were impressed with their efforts and very pleased to see that alumni responded at all levels,” said Warner Fletcher, chair of the George I. Alden Trust, which was established in 1912 by WPI’s first professor of mechanical engineering and is now one of Worcester’s most venerable philanthropic institutions. “The Foisie Innovation Studio is critical to fulfilling WPI’s mission because it creates space for theory to meet practice. Since its founding more than 150 years ago, WPI has focused on innovating in ways that could make our world a better place. The work that will be done in this building could create meaningful, positive changes around the globe. This was an exciting project to support, and the Alden trustees are glad to have inspired others to get involved, too.”

Since 1970, project-based learning has been the core of WPI’s undergraduate curriculum. Known as the WPI Plan, this approach builds upon WPI’s philosophy of balancing theory and practice in education. The WPI Plan is a flexible and academically rigorous program that synthesizes classroom experience with projects that challenge students within important professional and social contexts. Throughout their four years at WPI, students work closely with faculty and each other on projects that allow them to apply their acquired skills, knowledge, and abilities to develop solutions for authentic, open-ended, real-world problems—both within their own communities and in communities around the globe, through WPI’s 45 off-campus project centers. The program, which remains distinctive within higher education, has become a model for other colleges and universities, largely thanks to market demand for schools to better prepare students for the real world and the job market. WPI’s leadership position was highlighted earlier this year when the National Academy of Engineering awarded WPI the 2016 Bernard M. Gordon Prize for Innovation in Engineering and Technology Education.

The Foisie Innovation Studio will serve as a hub for WPI’s project-based curriculum. The $49 million, 78,000-square-foot facility will guarantee that future generations of students have the physical space in which to immerse themselves in WPI’s distinctive brand of learning. The building is named for Robert A. Foisie, a 1956 graduate of WPI and the university’s most generous individual donor, whose lifetime commitments have helped nearly 600 students realize the dream of a WPI education.

“Donors were really motivated to give to this campaign—both by the challenge and by what will happen inside the Foisie Innovation Studio,” said William J. McAvoy, WPI vice president for University Advancement.

Plans include a robotics lab, makerspace, and high-tech classrooms for the Great Problems Seminar, courses that introduce first-year students to WPI team-based projects. A Center for Innovation and Entrepreneurship will support the “practice” side of WPI’s motto by helping students find paths to commercialization for their projects. The Global Impact Lab will house WPI’s global projects and highlight student project teams working throughout the world.

The building also includes a three-floor residence hall with space for 140 students. The naming of the Messenger Residence Hall was announced at the groundbreaking event, honoring Priscilla and George Messenger Jr. ’51 for their lifetime support of WPI students. The couple established the George and Priscilla Messenger Endowed Scholarship Fund in 2001, and has made additional generous commitments to that fund over the years.

George Messenger is widely known for his pioneering work on the hardening of electronic systems, including contributions to the development of the EKG and the hardening of the circuits for the atomic clock in the Global Positioning Satellite. In recognition of this work, he received an honorary Doctor of Engineering degree from WPI in 2009. He also has received the WPI Alumni Association’s Robert H. Goddard Alumni Award for Outstanding Professional Achievement. The Messengers were awarded honorary doctorates by Hillsdale College, George in science and Priscilla in business.

“It is with tremendous gratitude and affection that we name this residence hall for Priscilla and George Messenger,” said Leshin. “Their support for WPI students has been inspirational, and it is fitting that the students who will live in the Messenger Residence Hall will be at the heart of this campus community.”

About George I. Alden and the Alden Trust

George I. Alden was an industrialist and an educator, having taught mechanical engineering for 28 years at WPI. As pioneer members of the WPI faculty, George Alden and his colleague Milton Higgins achieved national recognition in the 1880s and 1890s for their skillful and compelling espousal of an engineering education that combined practice with theory. Alden and Higgins were early examples of creative academic innovators whose energies took them beyond the campus into the competitive world of industry. In 1885 they joined with several Worcester businessmen in establishing the Norton Emery Wheel Company. Upon his retirement from industry and teaching, Alden wanted to help young people become effective contributors to society through education. Thus he became a trustee of WPI, a trustee of the newly formed Worcester Boys Trade School, and a leading member of the Worcester School Committee. He established the George I. Alden Trust on August 24, 1912, for the general purpose of “the maintenance of some charitable or philanthropic enterprises,” with particular expressed interest in “the promotion of education in schools, colleges, or other educational institutions,” as well as a particular interest in several named Worcester educational organizations. With more than $25 million in overall contributions, the Alden Trust has been the most stalwart supporter of improvements to WPI’s physical plant, as well as one of the university’s most generous benefactors.