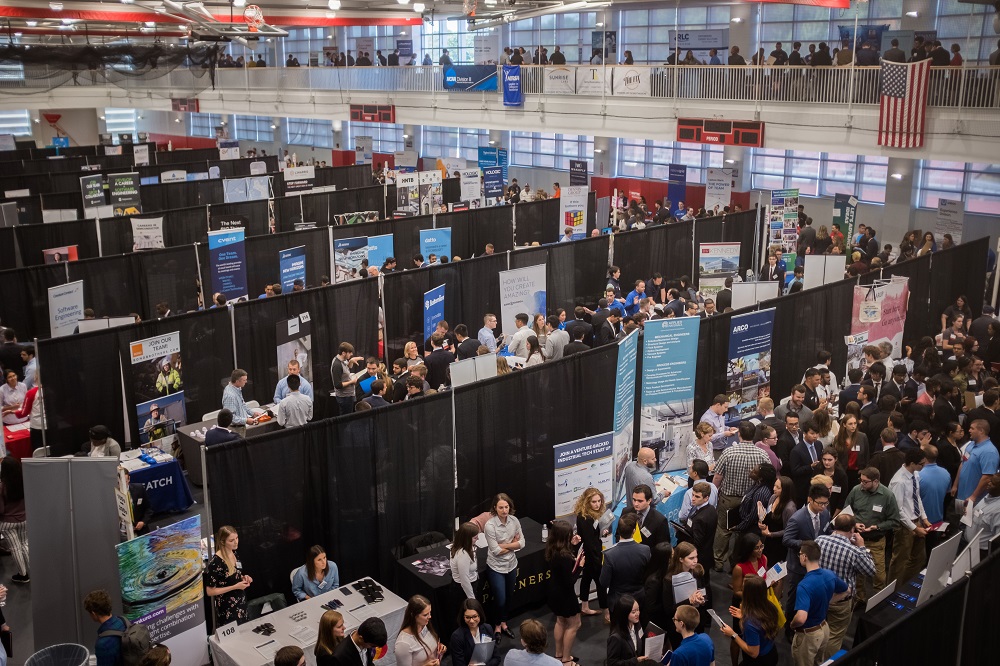 Thousands of students connect with hundreds of employer reps

More than 3,000 students and alumni participated in the Fall Career Fair Thursday, Sept. 19, in the Sports & Recreation Center, making it the largest career fair since it began decades ago.

Jaime Dillon, recruiting specialist for the CDC, said 278 alumni returned to campus as employer representatives for the event and students and alumni from across all degrees and disciplines attended for an opportunity to professionally present themselves to potential employers and network.

“This was our largest Career Fair, both for the number of companies and number of students,” Dillon said. “It is only possible with our volunteers. More than 100 staff and faculty from a variety of offices across campus came together to make the event a success.”

The week of the Career Fair began with employers on a panel assisting students with career fair preparation, reviewing resumes, and “working on their elevator pitches,” Dillon said. 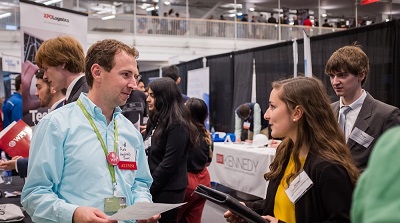 A number of employers returned the day after the fair to host on-campus interviews. One was Robert O’Shea '84 ME, '97 (MS MFE) the campus manager for Raytheon.

“I went to WPI, so I like the idea of project-based learning,” he said. “When I started at Raytheon in 1984, they were working in teams, and now, 35 years later, the team dynamic is even stronger. With our self-managed team model you go off on your own, so the self-directed, project-based team environment that WPI provides is even more important.”

Raytheon also helped develop the systems engineering degree at WPI, he said, and a high percentage of employees are WPI alumni.

“Bringing people from companies on site for students to connect with is very helpful,” Maglione said. “Around 90 percent of our engineers are from WPI. It is one of the few fire protection programs in the country.”

Tina Dutra ’15, development engineer in Ensign-Bickford Industries’ (EBI) aerospace and defense division, was hired by the company right after graduation.

“WPI helped prepare me through project-based learning in my role managing projects for customers,” Dutra said. “I work on aerospace projects for NASA, specifically the Orion spacecraft to get humans back to the moon and to Mars.”

WPI’s Interactive Qualifying Project (IQP) requirement for undergraduates helped prepare her, she said, for working with teams and working with people from different backgrounds in 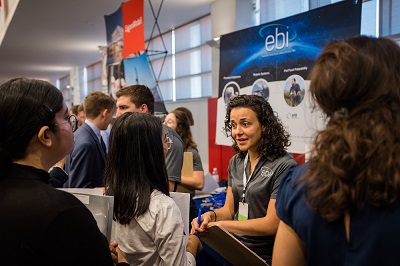 challenging situations where everyone may not agree—to have constructive discussions and talk on point.

“The IQP helped with the soft skills you don’t always learn in the classroom that help you with everyday life,” she added. “There are a lot of WPI alumni at our facility who are driven and passionate. It is a target school for our company.”

Dutra was speaking with students waiting in line for the opportunity, one of which was Rimsha Kayastha, a junior majoring in computer science who is completing her Major Qualifying Project (MQP) in China next year working on supercomputers. She said she was looking for internship opportunities at the event and had "a few good leads.”

“I like the way she [Dutra] was passionate about it,” she said. “I feel like I can be passionate, too.”

Robert Gagliardi ’09, who majored in electrical and computer engineering at WPI, is a supervisor at Anvangrid.

Getting a leg up

“The fast-paced, seven-week project-oriented curriculum at WPI gives students a leg up over the traditional semester-based college environment,” he said. “WPI produces high-performing students who successfully complete rigorous coursework and an MQP.”

Senior Anna Carriero, majoring in mechanical engineering, provided Gagliardi with her resume. He encouraged her to apply online and send him a cover letter.

“I am hoping to gain connections with employers to further me in the selection process,” Carriero said.

“The fair is a good experience networking with companies,” Casey said. “I gained some knowledge to find out what industry I want to work in. The Foisie Business School at WPI is second-to-none and holds preparation workshops weekly. The business school is really organized for getting you on pace for when you graduate.”

Felten said she was looking for full-time work at the event. “You still apply online, but I like that I made some connections with companies who see you in person,” she said. “It gives you the opportunity to stand out and a chance to hand them your resume.”

Ferguson said she likes to recruit WPI students because they are given high-quality projects to complete. “Having an IQP sponsor is similar to having a client,” she said. “When you are at WPI, you don’t realize how much you have a leg up until you are working with engineers from other schools and when you are involved in the hiring process.”

Companies are looking for innovative ways to solve broad connected-system issues. If you’re fascinated with connected devices, data-driven decision making, user interface and interactive media, the SMART World Virtual Career Fair is for you. This career fair will be held tomorrow, Sept. 24, from noon to 3 p.m., and is for students from all degrees and disciplines seeking a full-time job, internship, co-op, or part-time experience using the Brazen platform.

“It is exciting to offer a new type of virtual career fair for students and employers that both represents, and encourages, connected work,” said David Ortendahl, WPI Director of Corporate Relations. “Conversations will be held across time-zones and borders in a convenient software platform so that both populations discover each other.”

This is an opportunity to present yourself virtually through chat questions and dialogue with a variety of employers. More information can be found here, including the link for students to register directly in the Brazen platform.