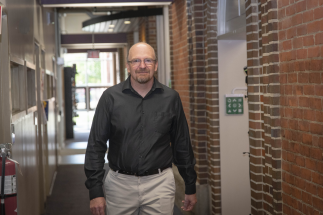 A Worcester Polytechnic Institute (WPI) mathematician is helping the U.S. Army create a thumbnail-sized chemical sensor that can be worn on outer garments to detect dangerous chemicals more quickly, and dramatically drop the rate of false alarms.

“Using the power of data science, we can greatly advance chemical sensors so they will be better able to save lives,” said Randy Paffenroth, associate professor of mathematical sciences, computer science, and data science, and a principal investigator on the project.

In the wake of Paffenroth’s work on a three-year $169,000 award that he received in 2016 from the U.S. Army Combat Capabilities Development Command Soldier Center (CCDC-SC) on the sensor project, he now is receiving another three-year award via the soldier center. Paffenroth is a Co-PI on a $1.8 million award to the CCDC to continue the sensor development, and approximately $249,000 of that amount is expected to support Paffenroth’s work on the project. 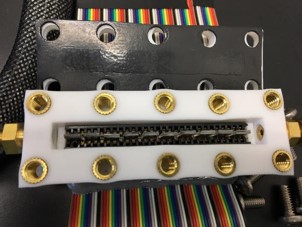 “This kind of work drives me,” said Paffenroth. “I can take algorithms and good theory and apply them to new problems, like making a better sensor. We’re taking math and data science and solving a real-world problem. We’re working on math to save lives.”

The wearable sensor device is built to mimic the human nose, which has roughly 400 types of olfactory receptors capable of discerning at least one trillion different odors. Each sensor in the device will detect combinations of multiple molecules: one might detect diesel fumes and a specific chemical agent, while another might detect diesel fumes and humidity. The results are combined to give a more complete and accurate assessment of the chemicals in the environment.

To improve the speed and accuracy of the device’s signal processing, Paffenroth combined new and old math techniques. Specifically, he blended an artificial neural network, which is a new type of machine learning that mimics the function of the human brain, with the Kalman filter, a classic algorithm developed around 1960 to get rid of “noisy” data to better detect problems while tracking airplanes. He combined the two because neural networks in this type of problem have a difficult time with signal processing, or culling through the “noise” of all of this incoming information, to accurately and quickly detect the presence of chemicals in the air. The WPI researcher combined the “noise dampening” Kalman filter with the neural network, creating a new algorithm dubbed the Autoencoder Kalman Filter. The classic and new algorithms work together to simplify noisy, complicated data from the sensors to better detect chemicals in the environment.

“If you have a lot of signals coming together and if they’re all noisy, they overlap a lot,” said Joshua Uzarski, PhD, a research chemist with the CCDC-SC. “That overlap could cause false positives or false negatives. It makes it so much more difficult to analyze the signals coming in and the patterns they form. The problem with sensors has been that they don’t work well when there are a lot of competing signals. Randy’s work takes care of that.”

An early prototype of the advanced chemical sensor is expected to be produced by the end of this latest three-year project.

“Instead of starting from scratch, why not start from something you know is good, like the Kalman filter, and then try to make it better?” said Paffenroth. “This is the power of data science. It’s the toolset that combines data with machine learning, computation, and old and new math to solve real-world problems. It’s the best way of solving a whole class of problems.”

“We’re not reinventing how chemical sensors work. Randy is using data science to make them work better,” said Uzarski. “To get the sensors to do what we need them to do, his data science work is absolutely crucial. We wouldn’t even try this project without him.”

WPI graduate student Matthew Weiss, who is working on the research project with Paffenroth, noted that after analyzing two seconds’ worth of data with the Autoencoder Kalman Filter, the sensor already is five times more accurate than with unfiltered data.

Paffenroth and Weiss have written five papers about this project that have either been published or accepted for publication.