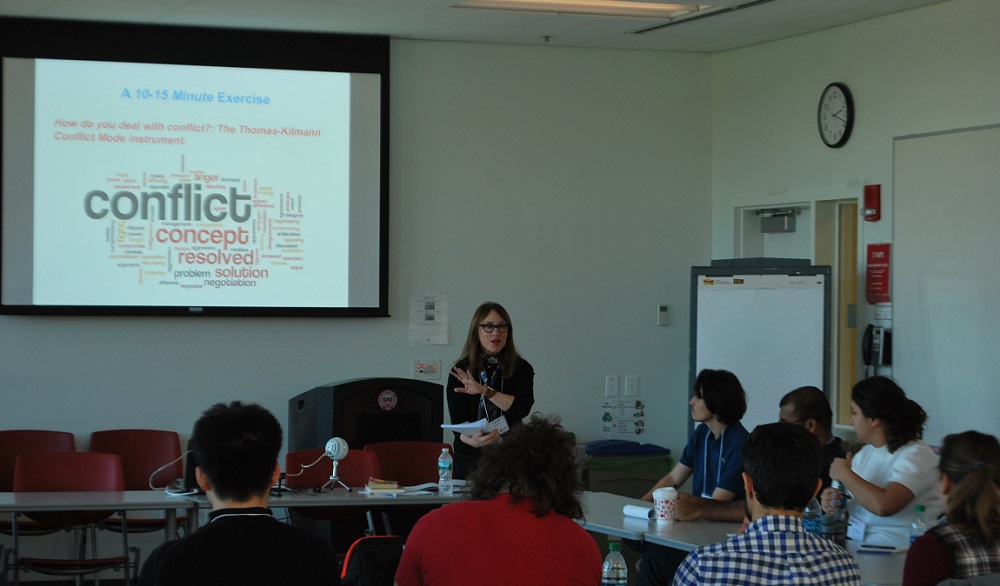 Initiative aimed at preparing PhD students for a range of careers

Carol Edelstein, a facilitator from Aspire! Group, faces an assembly of 20 PhD and postdoc students sitting at desks arranged in a U-shape, describing strategies for resolving conflict, effective listening and other approaches for developing interpersonal skills. Knowing when to be assertive or collaborative, admitting error, and even apologizing can have an impact on one’s ability to communicate and build an effective team, she counsels.

The hour-long discussion is one of a series held over the summer and through the fall that comprise the Student Training and Readiness Session (STARS), professional development seminars aimed at honing leadership, communication, and other interpersonal skills.

For Ross Lagoy, a fourth-year PhD student, the STARS program is a way to align his goals and figure out the best path to reach those goals.

“Hopefully, it will make my path stronger and more directed,” he says. Having professors, postdocs and other graduate students come in to share their experiences has been particularly helpful, he says.

“It was good to see some graduate students above me, and how their stories relate to mine, and hearing professors and what their paths were when they were in graduate school,” Lagoy says. “It was nice to hear how they accomplished their goals.”

Dean of graduate studies Terri Camesano acquired $35,000 in funding from the National Science Foundation to support the training of PhD students for multiple career pathways. The STARS program, creation of a Center for Graduate Student Professional Development, and the promotion of internships for PhD students are components of the WPI PhD Plan, one of nine initiatives under Elevate Impact: A Strategic Plan for WPI, 2015–2018. Camesano and Michael McGrade, dean of graduate enrollment services, are the implementation leads for the PhD Plan.

Camesano says that surveys of the university’s PhD graduates show that about a third of them want to go into academic careers, and the PhD Plan is a way to provide training in leadership and interpersonal skills. “These are things that we’ve already done well with our undergraduate program, and it fits in perfectly with the WPI mindset,” she says. “But we didn’t offer those types of programs and training for PhD students, at least not in a centralized and easily accessible way.

“That’s the overarching goal of the PHD Plan, giving them training they need beyond just their research and scholarship. They’re still going to become scholars, but we want to build other types of competency around that scholarship.”

The STARS program is offered in coordination with the Career Development Center, as both deal with topics related to career preparation; among them, working a career fair, how to write a CV (curriculum vitae), and interview skills.

“STARS is in its second year. Because we found that the majority of participants were master's students, we created a spinoff of STARS for PhD and postdocs, a leadership workshop,” Camesano says. “We decided to pilot it with a small group to provide them with more in-depth training. The sessions are broken up into modules; teamwork, mentoring, presence, conflict, and interpersonal skills. Our final session is coming up in December and that’s on building your personal roadmap. There will be a self-assessment to find out what you’re good at, what you need to develop, and fitting that into your career plans.”

Camesano says the program works well for students at a particular point in their PhD work. “If they do this program too early, they’re still taking classes and not ready to make a personal roadmap,” she points out. “They might not get as much out of it. And if you do it too late­—if you found when you do your assessment that you missed something—you may not have time to develop those skills.”

Another main thrust of the PhD Plan is the establishment of Individual Development Plans (IDP) for all students by 2018. Progress is being made on this front, according to McGrade, who says he and Camesano have already met with a faculty member and students in chemical engineering who piloted the first IDP. “We’ve gotten feedback, and we’re working with a couple of other departments on trying to broaden it to a larger range of students,” McGrade says. “The feedback has been positive so far. In particular, students have said that it made them think more broadly about what their options are.”

Further, steps have been taken to hire a director of graduate student professional development, slated to take that position in February. That person will be the coordinator and the central contact person for many functions, such as the IDPs, and will administer the STARS program, McGrade says.

Graduate internships is another area where McGrade says significant progress is being made. The goal is to create a framework for PhD students to have off-campus experiences. “That could be an internship at a company. It could be time spent at a national laboratory. Whatever makes sense for the students’ research and career goals,” McGrade says. “Students who have done this already have come back super motivated.”

Camesano says there had been some PhD internships before, but they weren’t part of a concerted effort. “But, because they need to develop these types of skills, if they have a chance to go into industry for three months over the summer, then they get to see how industry does things, work on timelines, deadlines,” she says. “It’s very different from academic research. Not all the students in this group have had that opportunity, but we’re hoping that for future students, it will become more and more possible for them. That’s what we’re working toward with CDC and all the academic departments to make that happen.”

This is another part of the effort to broaden the PhD experience and get students to think outside of the walls of the university, McGrade says, pointing out that WPI already does that well for undergraduate students. “What we’re doing is trying to get faculty and students to rethink the nature of advanced graduate research.”

Looking ahead to the 2017–18 academic year, actions will be undertaken to measure completion rates, attrition, and job placements for graduate students, McGrade says. Federal regulations require meticulous data collection on undergraduate study, but far fewer expectations are placed on graduate schools. “We have those things, but they tend to be in departments,” he says. “It’s harder to put together a centralized location for that information. We’re working on that.”

Toward that end, senior vice president for enrollment and institutional strategy Kristin Tichenor has been overseeing the creation of an office of institutional research, which will help keep track of graduate students’ progress in the program and what they do after graduation, McGrade says. Over the last few years, the Career Development Center has given more attention to graduate student placement, and Alumni Relations is doing more to stay connected to graduate student alumni, he points out.

“One of the challenges is that we have a large international student population, and many students leave the country after they graduate,” McGrade says. “We’re a global university, and we have contacts around the world, and it’s just a matter of making the most of those contacts.”

The PhD Plan is focused on creating a more holistic experience for PhD students, and dovetails with efforts to raise WPI’s reputation and visibility as a graduate school, McGrade says. “We want them to be thinking about making their best work known to the outside world as soon as they and their advisors think they are ready.

“Also, we’re encouraging them to apply for grants or prizes that are part of national competitions. We’ve done well when our students have competed for those types of things, and it creates momentum. Once you get it rolling, it becomes part of the culture. Students need to be told it’s an expectation, because all of our peers will be applying for grants and submitting papers and doing posters at meetings.”