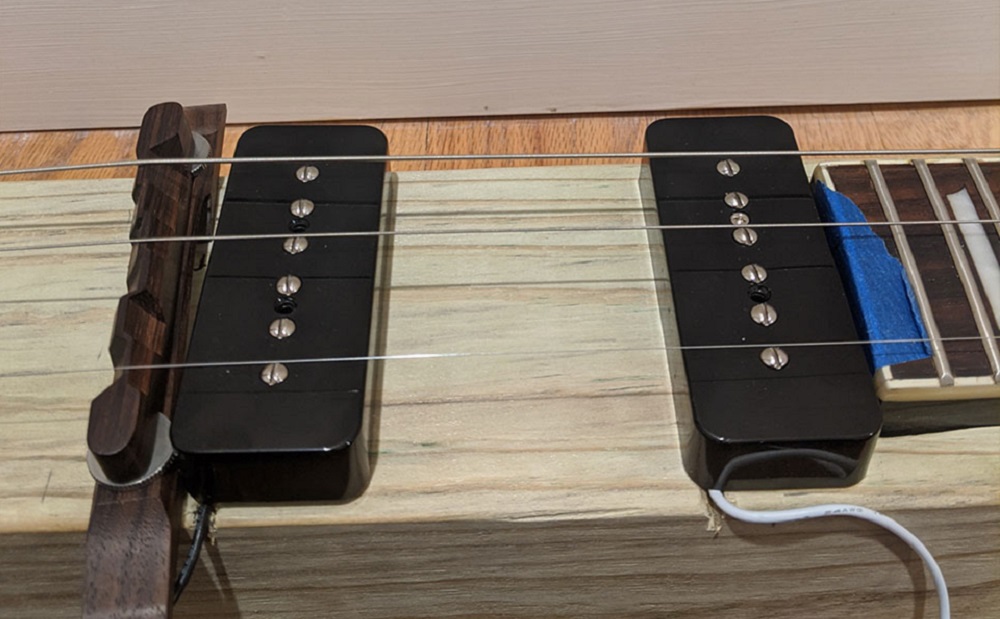 WPI’s Electric Guitar Innovation Lab (EGIL), established nearly three years ago as an informal space to experiment with new ways of evolving the instrument, has connected with a well-known music foundation that is funding some of its innovative work.

The lab, created by music professor V.J. Manzo, is doing work funded by the Les Paul Foundation, named for the iconic electric guitar innovator and musician, which supports music, music engineering and sound programs. The EGIL focuses on projects that address real-world needs of performers, instrument makers, and others who work professionally with guitars or guitar innovation.

“I want to find things that will perpetuate the lab, that will support student projects and tinkering,” Manzo says. The Les Paul Foundation first awarded Manzo a grant in 2020, and has now awarded his efforts again for 2021. “Les Paul did a lot in his life with not much,” he points out. “I want to give a nod to that through this completely free, hands-on camp. Students will leave the camp with music technology that they build themselves as well as recordings of their own compositions!”

"The students of V.J. Manzo at WPI are clear examples of the same innovative thinking as that of Les Paul,” says Michael Braunstein, executive director, The Les Paul Foundation. “Les always looked to create things that didn’t exist, and by doing that he changed the world of music forever. We are looking forward to all the things that will be brought forward by the remarkable creativity and innovation of the students at WPI.”

Due to COVID precautions, the lab this year will continue to be held online. “I’ve been shipping things (to students) through the postal service,” Manzo says. “We’re having a lot of fun, and exploring new things.” 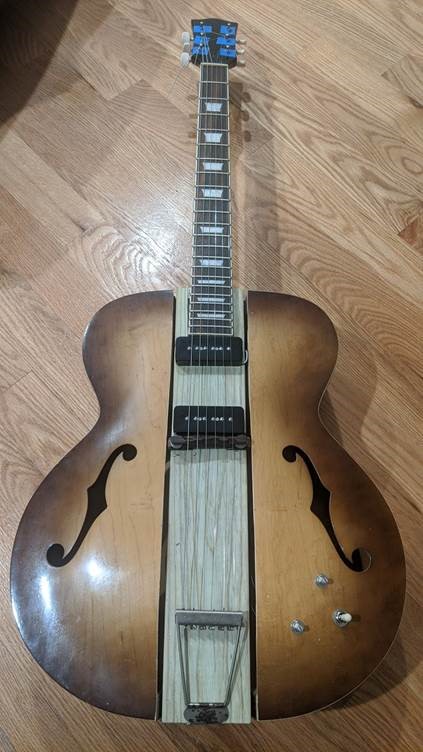 One of the projects lab students are conducting is called The Rail, based on Les Paul’s first attempt to design an electric pickup to amplify the sound of a vibrating guitar string. In doing so, Paul used a cast-off section of steel rail and the mouthpiece from his mother’s telephone. Students in the EGIL are encouraged to experiment with other “found materials” to see which work and what auditory qualities they produce.

“Replicating Les Paul’s experiments is a perfect fit for what I want to do. His approach to inquiry and experimentation was shockingly ‘WPI’,” Manzo says. “The Les Paul (foundation) agrees we’re a great fit for this type of research and hands-on project-based learning. Were the only lab in the world doing this sort of thing!”

Robotics major Lauren Wach ’22 was not familiar with the guitar, but joined the lab last semester because she was curious as to how an electric guitar works. She and her lab partner worked on the Log Project, a modified version of The Rail, in which they built a guitar around a section of lumber. The inner workings are covered by an archtop-style hollow body that looks like a store-bought guitar, Wach says. “It’s similar to what Les Paul used as his original creation.”

“We took a 4x4 and modified it by scooping out part to make a neck pocket to attach the neck. We attached the tailpiece to the bottom and attached strings from the top of the neck to the tailpiece. I did the wiring and circuitry inside the wings (of the body), drilled holes in the bottom to plug in an amp,” Wach says. “The inner workings are covered by an archtop-style hollow body that looks like a store-bought guitar. It’s similar to what Les Paul used as his original creation.”

She adds that the experience gave her a new appreciation for the guitar. “I was always interested in how things work, taking things apart to see how they work. Now, if I hear an electric guitar, I think about the engineering aspect of it. It’s a different way of listing to music when I know the inner workings of it.” 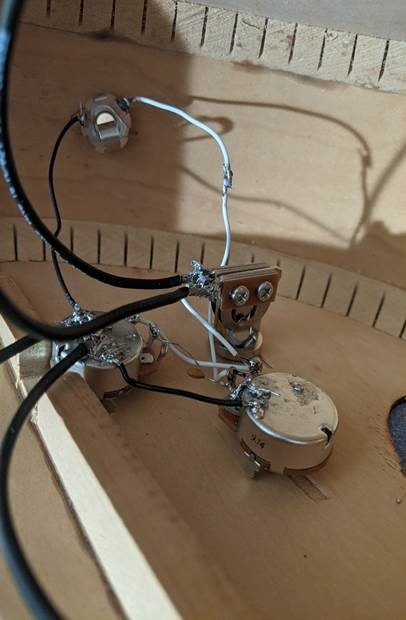 Manzo pointed to another project that he believes has the potential to garner recognition. In 1958 Les Paul started work on a particular electric pickup he envisioned, and even had a patent awarded in 1959. But Paul never succeeded in development of the pickup, he says, because the magnet technology that existed in 1959 would not have supported his idea.

“We are trying to realize his vision that was not realized before,” Manzo says. “Here’s an idea Les had, but wasn’t able to experience in his lifetime. We will bridge the gap. It will be awesome for us to walk down that path.” He has enlisted the help of guitarist and pickup designer Bob Palmieri, founder of Duneland Labs to work with lab students.

Students are also working on developing a testing rigs they’ve created to analyze individual guitar components created in the lab as well as guitar electronics and effect pedals. “Les saw the value in building these small testing rigs and built several of them while prototyping various electronics, so we’ve used some of his work as inspiration.” Manzo explains. “The rig we’ve developed has strings and all of the individual components of a guitar built into modular blocks that can be removed. We can machine or 3D print the module blocks on campus and build components directly into them—we don’t have to sacrifice a guitar by taking it apart if we want to observe or experiment with how a particular guitar component functions. It’s a completely modular rig for testing components.”

The lab has also developed digital and analog effects pedal kits, which Manzo’s students can use to build a complete guitar effect pedal within a seven-week term. “Les Paul developed a number of interesting audio effects that he then used in his compositions, but it’s not feasible to complete an effect build in a single term. These kits provide the scaffolding students need to get something done in seven weeks,” he says.

“Students can ramp right up to it in a short amount of time. They'll listen to a recording by Les Paul, determine the effects processes he used, implement those effects into a stand-alone effect pedal they build themselves, and then use that effect in their own music. It’s not just Les Paul’s music that's relevant to what we’re doing; it’s his whole sense of process.

For more information on these projects, visit http://guitar.wpi.edu/lespaul