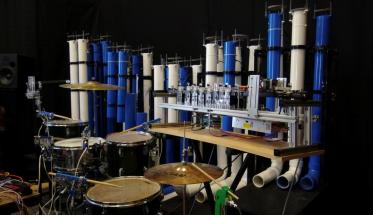 The concert, called Sound Fusion, will be held Sunday, Oct. 27, at 3 p.m. in the 19th century concert hall in downtown Worcester. With a repertoire ranging from Bach to rock, the performance will blend the venue’s 3,504-pipe Hook Organ with 21st century robots Barton created with undergraduate and graduate students. Of the Robotic musicians one plays strings; another, called Cyther, plays a zither; two are percussive, including a percussive PVC pipe aerophone. 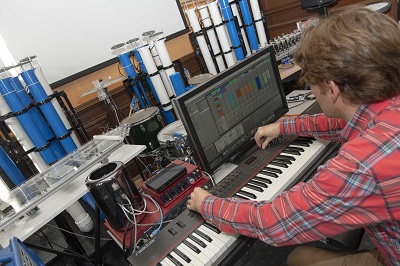 “Music is an ever-evolving art form,” says Barton, who notes that the event brings together WPI’s Music, Perception and Robotics Lab with Mechanics Hall musicians and the Worcester Chapter of the American Guild of Organists. “As these new robotic instruments are being invented, it’s enabling a new kind of musical expression. I’m hoping that with this concert, people will experience musical pieces they have known in a whole new kind of light.”

Barton teaches classes like “Making Music with Machines” and “Artificial Composition,” exploring how music and technology can be combined to create new forms of musical expression and experiences. Students in his classes design, create, and play musical robots, including those that will be part of the concert.

“I see robotics as a part of the musical trajectory,” says Barton. “They’re new musical tools. They’re new instruments for artists to use. We’re showing ways that robots can respond to people and how humans can interact with robots in different ways.”

The robots can play autonomously or they can be controlled by a human performer. During the concert computer science major Anthony Topper '20 will play a keyboard that controls both a string robot and the percussive aerophone robot. When Topper plays a C-sharp, for instance, the robots will do the same. The machines, Barton notes, also are able to improvise, taking in what human musicians play and then, in turn, playing something that could be complementary or completely different.

An interactive robotic demonstration will begin at 2 p.m. on the day of the concert.

Tickets, which can be purchased on the Mechanics Hall website, are $12 for adults, $10 for college students, and $5 for those 17 and under. Admission for WPI students is free with ID.