This weekend WPI offers a new twist for all live music aficionados who love to watch the improvisational and innovative ways musicians interact in a live concert. 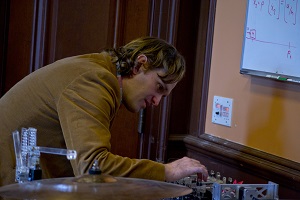 Sonic Currents, the brainchild of Scott Barton, assistant professor of music and director of WPI’s Music Perception and Robotics Lab, debuts what he hopes to be one of many concerts that fuse human and electronic improv styles. The concert will be held Saturday, Nov. 15, at 7:30 p.m. in Riley Commons.

“This is a brand-new concert series,” says Barton. The music will blend both human composers and musicians with robots that play composed music and also respond musically and autonomously to the human’s choices. And while the technology to create the concert’s movements is innovative, Barton still wants the performance to be “intellectually challenging, aesthetically pleasing, and always in service of artistic expression.”
“The challenge is [having] all these different technologies going on, and putting it together into a seamless concert.” —Scott Barton
All performers and composers are professionals that Barton has worked with or has personal connections with, and include Ted Coffey, Aurie Hsu, Steven Kemper, Yuri Spitsyn, and Matt Malsky. One performance features a belly dancer interacting to robot-performed music and another is an interactive piece that uses various speakers for different sonic effects, says Barton. Another performance features the amplification of the inside of a computer as it works, and Josh Rosenstock, associate director of Interactive Media and Game Development and associate professor in WPI’s Humanities and Arts department, will show an interactive installation.

Barton hopes to feature student work in a future concert and is thrilled to bring this type of concert to campus. “It’s common around the world to put these kinds of concerts together,” he says. The concert, says Barton, is a natural fit for WPI, where the student body is very interested in and knowledgeable about both music and technology.

Barton, who will also perform, creates software that allows human musicians to interact with robots. “The robots respond autonomously,” says Barton. So while Barton plays his guitar, the robot will respond not only to the composition but also to the improvisation.

No, the robots don’t look human – more like a string with various tangents or percussion arms attached. The robots were designed and built by EMMI (expressivemachines.com) and the Music Perception and Robotics Lab. 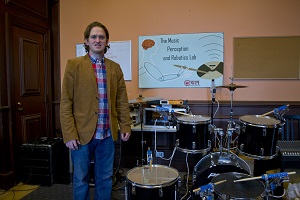 Scott Barton with some drums equipped with
robotic arms that will play percussion.

Organizing a concert of just humans with instruments is tough enough, but adding robotic elements to the mix complicates the mechanical and musical flow. “It’s a lot of moving parts,” says Barton. “The challenge is [having] all these different technologies going on, and putting it together into a seamless concert.” And with so much going on, he tries to weave some breathing room between pieces. “There is very much the possibility of sensory overload,” Barton says with a laugh.

Matt Malsky’s Thirteen Ways of Listening to a Loudspeakerwill be featured in Sonic Currents, and he’s happy to see several artists coming together. “I’m excited to have colleagues across town at WPI that are doing innovative musical projects and events, and thrilled to get to learn more about what they’re up to,” says Malsky, professor of music and artistic director of Clark University’s music program. “It’s important for students to know what’s happening musically outside their own musical projects and classes.”

Barton relishes the unpredictability of mixing humans and robots in a performance. “The thing I love about improv is the chance for surprise,” he says. “I love that in music. The coolest thing when robots make their own choices is that they can do things that surprise you. Those are the moments in music I get most excited about.”

Audience members are welcome to stay after the concert to ask questions and get a closer look at the robots.