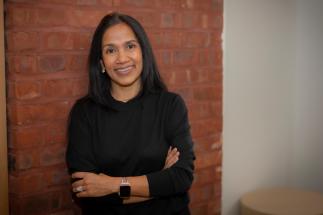 Reeta Rao, professor and interim head of the Department of Biology and Biotechnology at Worcester Polytechnic Institute (WPI), has been elected a lifetime fellow of the American Association for the Advancement of Science (AAAS), the world's largest general scientific society.

Rao is among 564 scientists, engineers, and innovators from 24 disciplines who are being recognized in the 2021 class of fellows for their scientific and socially distinguished achievements. AAAS cited Rao for her contributions in the fields of fungal infectious disease, host-pathogen interactions, and undergraduate and graduate education.

“This honor is a direct reflection of the collective efforts of my talented students, fellows, lab personnel, collaborators, and colleagues, as well as the collective blessings of my ‘Jedi council’ of mentors,” Rao said. “It is also a testament to the institutional environment that supports, sustains, inspires, and celebrates science and technology.”

A member of the WPI faculty since 2004, Rao focuses her research on the line between fungal virulence and immune system recognition. Her lab is identifying novel therapeutics for fungal pathogens, particularly those in the Candida family of fungi that are multi-drug resistant.

Rao’s research findings have been published in peer-reviewed journals such as Nature Communications, Proceedings of the National Academy of Sciences, and Genetics. She also holds two patents.

Rao received her PhD from Penn State College of Medicine and completed a postdoctoral fellowship at the Whitehead Institute in Cambridge, Mass. She is a visiting scholar at the Broad Institute, a collaboration between Massachusetts Institute of Technology and Harvard University.

AAAS was founded in 1848 and includes nearly 250 affiliated societies and academies of science, serving 10 million individuals. It publishes the prestigious journal Science.

New fellows will receive certificates and gold-and-blue rosette pins to commemorate their election. AAAS plans to celebrate new fellows at a ceremony later this year.