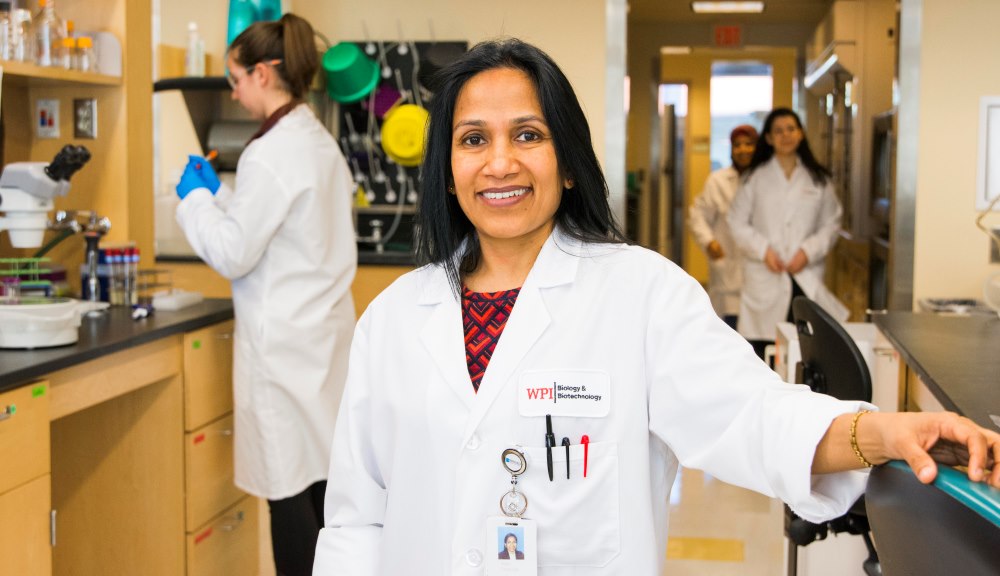 Award from the Society for Industrial Microbiology and Biotechnology (SIMB) recognizes dedication and excellence in teaching, mentoring, and research.

Reeta Rao, PhD, associate professor of biology and biotechnology at Worcester Polytechnic Institute (WPI), has been named the recipient of the 2018 SIMB Waksman Outstanding Teaching Award by the Society for Industrial Microbiology and Biotechnology. Rao, who was nominated by former WPI students, will be honored at the SIMB Annual Conference this week in Chicago.

The Waksman Outstanding Teacher Award is given annually to one professor who demonstrates particular excellence in and dedication to teaching, mentoring, and research; awardees are nominated by students, and nominations are supported by peers. The award acknowledges the important role educators play in sustaining the fields of industrial microbiology and biotechnology; it is dedicated to Selman Waksman, who was an outstanding teacher of microbiology at Rutgers University. Waksman won the 1952 Nobel Prize in Physiology or Medicine for his study on soil-dwelling organisms, work that led to the discovery of streptomycin and other antibiotics.

“I love teaching and mentoring—it’s the best part of my job,” said Rao, who said receiving the award was “phenomenal and wonderful. Mentoring is really about helping students plan the rest of their professional lives—helping them figure out who they are, what they want to do, and how to get there. I have been lucky to have been surrounded by positive role models and mentors throughout my own professional career. I am committed to paying it forward.”

Rao was nominated by Charu Jain, her first PhD student, who completed her doctorate in 2012 and is now head of biotechnology at L.J. Institute of Applied Sciences in India; Jeff Letourneau ’17, whose Major Qualifying Project (MQP), a professional-level design or research project all undergraduates must complete, was advised by Rao and won the 2017 Provost’s MQP Award; and Kyle Peet ’08, who completed his MQP with Rao and frequently sought her out for mentoring even while conducting graduate work at MIT.

“These are extraordinary students,” Rao said. “I simply was their cheerleader, assuring them that they can do—they can achieve their career goals.”

In his MQP report, Letourneau acknowledged that, Rao provided “guidance on this project and in my career as a microbiologist. It was her Medical Microbiology course that first got me interested in the field, and I will be pursuing my PhD in molecular genetics and microbiology at Duke University starting this fall [2017], also thanks in part to her advice throughout my graduate school application process.”

Rao’s nomination was supported by Kamal Rashid, who recently retired as director of WPI’s Biomanufacturing Education and Training Center and, as a member of SIMB, originally noted the award opportunity, and Beth Hood, the Lipscomb Distinguished Professor at Arkansas State University.

“When I saw the SIMB call for nominations, I immediately thought of Reeta,” said Rashid. “It was truly a pleasure to support her nomination—she is an outstanding microbiologist and mentor and deserves such recognition. Awards from prestigious societies and organizations reflect not only the caliber of individual faculty, but also the excellence of WPI as a university.”

In addition to developing and teaching undergraduate and graduate classes, Rao has advised more than 50 undergraduates completing MQPs, master’s students, and PhD students. She has also served as the graduate program coordinator for WPI’s Department of Biology and Biotechnology since 2011 and was elected to a three-year term on the faculty Committee on Graduate Studies and Research, which she co-chairs this year.

Rao has been involved in course development and helped revise PhD requirements in biology and biotechnology in 2014; she has championed a skill-based master’s degree program designed to provide advanced coursework and laboratory techniques applicable to the biotechnology industry.

She also created Next-in-BIO at WPI, a “capacity development opportunity” designed to help undergraduates obtain and improve the critical skills, knowledge, and resources required for positions in academia and industry.

“I’m extremely proud of Next-in-BIO,” she said. “The founding idea was to keep undergrads engaged, particularly at a point in their academic lives where they may be feeling overburdened with coursework, research, and other life stresses and are at risk for burning out. It’s a way to help them make the connection between the work they’re currently doing and what doors it may open for them in the future they envision for themselves.”

Next-in-BIO also aims to “bridge the gap” by giving undergrads an opportunity to showcase their successes and meet with WPI’s partners in the regional biotech industry to learn about career paths. The 2018 Next-in-Bio, to be held Nov. 3, will feature keynote speaker Travis McCready, president and CEO of the Massachusetts Life Sciences Center.

Rao’s mentoring extends beyond WPI: she launched a mentoring workshop through the American Society of Microbiologists (ASM) annual international Conference on Candida and Candidiasis. “Mentoring is quite critical in professional societies, and it was very rewarding to see the response among young members of the community when I launched this workshop at the conference last April. I am encouraged and hope to have others in our field participate and mentor younger colleagues throughout their careers.”

As noted in the SIMB award notification, Rao is an academic scientist who is “committed to the career development of scientists at all levels of training. Students and research associates in her laboratory are trained to use a variety of biochemical, molecular-genetic, and genomic tools to study host-microbe interactions to understand and manage fungal infectious diseases.”

In her research, Rao studies the biology of fungal diseases, particularly those caused by Candida, a species of fungi prevalent in humans that are responsible for oral thrush, ear infections, and vaginitis. The microorganism can also cause systemic infections in immunocompromised individuals and is a leading cause of serious illnesses and death among hospitalized patients. Treating the infections costs more than $1 billion annually.

Rao was elected a fellow of the American Academy of Microbiology, the honorific leadership group within the American Society for Microbiology, in January 2018; fellows are elected through a highly selective, peer-review process, based on their record of scientific achievement and exceptional contributions to the advancement of microbiology.

Along with her appointment at WPI, Rao is a visiting scientist at the Broad Institute of MIT and Harvard and a member of the Institute for Drug Resistance at the University of Massachusetts Medical School. She is a member of the American Association for the Advancement of Science, the American Society for Microbiology, the National Association of Inventors, the Genetic Society of America, the Medical Mycology Society of the Americas, the International Society for Human and Animal Mycology, and the Indus Entrepreneurs, in addition to the Society for Industrial Microbiology and Biotechnology. She is also an associate editor of the open access journal PLOS ONE.

Before joining WPI, she was a postdoctoral researcher at the Whitehead Institute, supported by a National Institutes of Health Ruth L. Kirschstein postdoctoral fellowship. She earned a BS in pharmacy at Birla Institute of Science and Technology in Pilani, India, an MS in bioscience and biotechnology and an MS in environmental sciences at Drexel University, and a PhD in biochemistry and molecular biology at Pennsylvania State University Medical College.

Rao’s research has been widely applauded by colleagues and has resulted in more than 20 peer-reviewed journal articles—many of which include her students—and invited review articles; two of her papers have been featured by the Faculty of 1000 (F1000) publishing service (one was rated a “must read”). Her 2015 paper, “The evolution of drug resistance in clinical isolates of Candida albicans,” in the open-access journal eLife, was accompanied by an "Insight" article by two researchers from École Polytechnique Fédérale in Lausanne, Switzerland, who commented on the importance of the study.