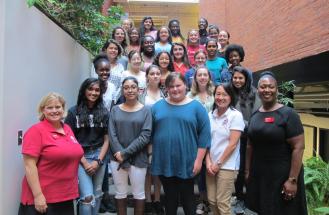 A paper written by a team of WPI directors chronicling the university’s efforts to encourage women to consider advanced degrees in STEM fields was selected by the American Society for Engineering Education (ASEE) 2020 Virtual Conference as Best Diversity, Equity, and Inclusion Paper in the Pre-College Engineering Education Division.

The paper, “Building and Evaluating a Multi-tiered Mentor Program to Introduce Research to High School Women,” details how WPI developed the Women’s Research and Mentoring Program (WRAMP) with the goal of encouraging more women to consider advanced degrees in science, technology, engineering, and mathematics (STEM). The multi-tiered mentor program has evolved over its first three iterations to place two local high school students from underrepresented groups in a graduate student mentor’s research lab along with an undergraduate student as a mentor/mentee.

The paper was authored by Katherine Chen, Executive Director of the STEM Education Center; Professor Tiffiny Butler, Director of the Office of Multicultural Affairs; Suzanne Sontgerath, Director of Pre-collegiate Outreach Programs; and Ryan Meadows, Associate Director of Summer Programs in Pre-collegiate Outreach. The paper outlines how bringing the three populations together “provides a unique mentoring scaffold that serves to encourage the high school women and undergraduate women to consider advanced degrees, while also providing the graduate women with valuable teaching and mentoring opportunities.”

It explains how the WRAMP program, with funding through the Women’s Impact Network, started out with the goal of having continued engagement with high school students who participated in the university’s summer precollege programs by providing them with hands-on STEM research in state-of-the-art research laboratories under the guidance of women graduate student role models for a semester. The program also included the undergraduate mentor/mentee and expanded the professional development sessions for the mentors.

Chen says the paper was well received because of the deliberate, data-driven method in which the program was developed. “It’s because we were very intentional about the program,” she says. “We used research and strategy. We learned from others and reflected on it, constantly.”

Butler adds that a multi-tiered approach was developed to make the women in STEM program more inclusive. “We tried to build a pathway for underrepresented folks,” she says. “We also reached out to recruit mentors. It’s important for the students participating to have guidance from those who might have similar experiences or backgrounds as the high school participants.”

To date, over five WRAMP sessions and three program iterations, some 49 high school women have been served, with 30 from underrepresented groups.

Evaluation of the program was carried out through surveys and observation, and feedback sessions.

Sontgerath says the original idea to encourage more women with the interest to earn advanced degrees created an opportunity for the university’s PhD candidates to do mentoring. “Those things came together,” she says. “The thought was to put high school students with researchers. Let them think beyond just four years of college.”

Sontgerath adds that what made the team’s paper stand out was that it went beyond relating anecdotal information. “We had an intentional, sequenced approach,” she explains. “We were able to present from a data perspective, and showed numbers with each iteration of the program. ASEE is a technical organization that appreciates data.”

Continuing the WRAMP program during the COVID pandemic presents challenges, but the team is confident that the combination of online tools and ideas from the graduate student researchers will keep the program viable. Talks have begun with graduate students on how they would conduct a lab program virtually.

“We started by asking the graduate students, and they were on board. They said it’s doable,” says Sontgerath. “We’ve asked them to apply and show how they would do it, and we had the highest number ever of undergraduate applications.

“We’re assuming we will have a good application number from high school women. We love a challenge, so this is one more thing we’ll figure out.”