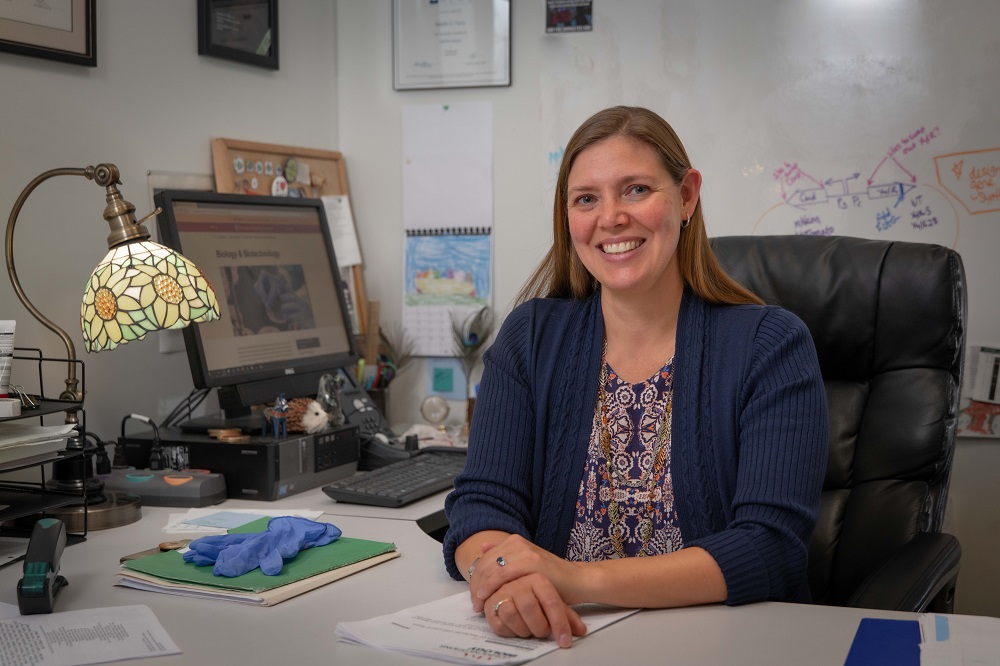 How many cells in that sample?

A WPI researcher and team of students were part of a group of 244 laboratories around the world that demonstrated a solution to a long-standing problem in biology—estimating the number of bacteria in a liquid sample.

Natalie Farny, assistant professor of biology and biotechnology, and seven current and former WPI undergraduates participated in the 2018 study, which concluded the best way to estimate the density of tiny E. coli bacteria in a liquid culture was by diluting a known quantity of silica microspheres in the culture, shining a light through it, and making an optical density calculation.

“The hypothesis was that if we could find a good calibrant for the optical density measurement, a lot of labs could report findings from the same experiment in the same units and get the same result,” says Farny. “We found that the results were accurate and reproducible.”

Findings were reported in the September issue of Communications Biology.

The study was part of the International Genetically Engineered Machine Competition (iGEM), an annual event in which high school, undergraduate, and graduate students around the world use molecular biology techniques to design, build, and test solutions to address international problems.

Members of the WPI team were Beck Arruda, Mei Hao, Camille Pearce, Alex Rebello, Arth Sharma, Kylie Sumner, and Bailey Sweet. They participated in the study on top of their main project, which involved testing proteins that could be applied to leafy crops such as lettuce to stop the growth of E. coli bacteria and reduce the rate of foodborne illness.

Farny advised the WPI students and was co-chair of the iGEM Foundation measurement committee, which designed the bacteria measurement study.

Being part of an international study and knowing that our data was going to be used for something that would contribute to future research was really cool, and I’m really excited I’m a co-author on a paper before I’ve even graduated.
- Kylie Sumner
Class of 2021

The study focused on a problem that is both small and important. Bacteria measure just 1 micron across, so tiny that most labs lack the instruments to count every cell in a sample. Instead, researchers use spectrophotometers that measure the absorbance or transmission of light through a sample to calculate optical density.

The challenge, Farny says, is that calculating optical density that way does not measure exact cell counts, and results are relative to the instrument performing the measurement. That represents a problem for the field of synthetic biology, which seeks to engineer biological processes with standard measurements and reproducible results.

The iGEM study distributed identical materials to 244 student teams and asked them to perform specific experiments testing three different approaches. In the end, the teams found that measuring the optical density of 1-micron silica spheres of known concentrations allowed labs to generate a more accurate optical density calculation of the number of E. coli cells present in a sample, Farny says. Calibrating optical density with a known quantity of microspheres also made it possible to compare results across different types of lab equipment. 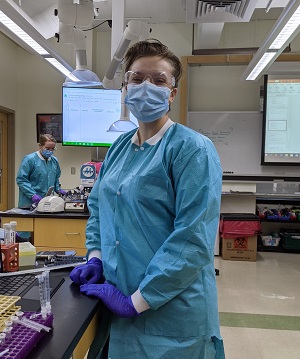 Sumner, a senior from Canaan, N.H., who is majoring in biochemistry with a minor in biology and biotechnology, says the WPI student team spent two weeks on the measurement study.

“Being part of an international study and knowing that our data was going to be used for something that would contribute to future research was really cool,” Sumner says. “And I’m really excited I’m a co-author on a paper before I’ve even graduated.”

Farny says the measurement approach identified by the study is fast, inexpensive, and easy to implement. Still, it’s not clear if researchers will adopt it.

“The next thing to figure out is how to incentivize researchers to adopt a protocol that could make their research more reproducible so it can be applied,” Farny says. “We also need ways to calibrate other biological measurements. There are still a lot of challenges.”