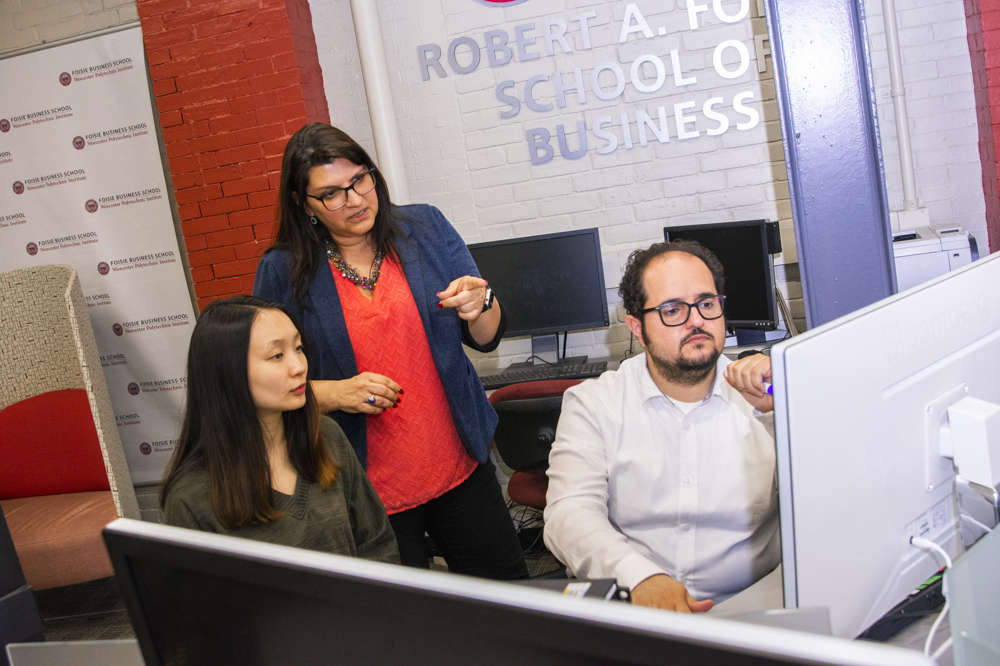 Eleanor Loiacono, professor in the Foisie Business School (center), encourages high tech companies to invest in neurodiverse employees. (Pictured from left to right are Ph.D students Shiya Cao and Fadi Almazyad, who were not involved with this project).

WPI researchers examine how technology companies can take steps to recognize and create inclusive strategies for workers with neurological variations, such as autism spectrum disorder

A newly published academic paper by Worcester Polytechnic Institute researchers says that high-tech firms need to take advantage of the talents of a growing neurodiverse workforce—including workers on the autism spectrum, and those with Attention Deficit Hyperactivity Disorder (ADHD), dyspraxia, dyslexia, and other conditions—in order to support neurodiversity and foster a more inclusive work culture.

The article, " Building a Neurodiverse High-tech Workforce," published in MIS Quarterly Executive, says that high-tech companies may increase their success by recognizing and acknowledging neurodiversity—variations in neurological structure and function—as an aspect of diversity in the workforce, and encourages businesses to make their cultures more inclusive to neurodiverse employees.

“I see so many talented young people being defined and limited by what others say they can’t do, when in fact they have so much to offer—wonderful abilities that make them a valuable asset to businesses and society as a whole,” said Eleanor Loiacono, professor in the Foisie Business School and director of the IDEA Hub at WPI.

Overall, Loiacono and Huimin Ren, a PhD student in the Data Science Program, focus on five arguments to encourage high-tech companies to invest in a neurodiverse workforce:

Their findings show that while all of the companies mentioned supporting diversity on the basis of religion, gender, sexual orientation, etc., none of them explicitly mentioned neurodiversity. Similarly, only 12 of the 39 Fortune 500 companies tweeted about or were associated with neurodiversity, with Microsoft having the most tweets, followed by Facebook and Amazon. The article also reported that of the 329 tweets the team searched, 57 (17 percent) related to advocacy of neurodiversity in the workforce, 186 (57 percent) mentioned recruitment of neurodiverse workers, and 62 (19 percent) mentioned information on conferences, talks, and advantages of developing a neurodiverse workforce.

“The workforce of the future is changing, and so is business as we know it,” Loiacono said. “Companies, for their own survival, need to understand and appreciate the creativity and innovativeness a neurodiverse workforce can bring to competitive industries, such as IT.”

Loiacono and Ren cite data from Morbidity and Mortality Weekly Report and Focus for Health, which shows that the number of neurodiverse people is climbing globally. In the United States, the percentage of 8-year-olds with autism grew by 150 percent between 2000 and 2018; worldwide, one in 160 children has Autism Spectrum Disorder (ASD).

People with neurodiversity, such those with ASP, ADHD, dyspraxia, and dyslexia, possess valuable skills and creative thought processes that are pivotal to a company’s success. However, neurodiverse people are often overlooked or regarded as less valuable or “odd” by their peers. Neurodiversity remains generally unrecognized by employers.

Loiacono says that she hopes her research will help companies that are struggling with making their staff more neurodiverse.

“Including those who are neurodiverse in the high-tech workforce can contribute not only to a company’s bottom line and society’s call for greater diversity and inclusion, it can help promote greater mental health within a society that is facing one of the greatest mental health crises it has ever seen,” Loiacono said.

Erin Solovey is a core faculty member in WPI’s newly approved MS program in neuroscience. The interdisciplinary program will advance our understanding of the human brain, one of the most significant and urgent scientific challenges of our time. The program begins in the Fall of 2019; applications are open. Learn more.