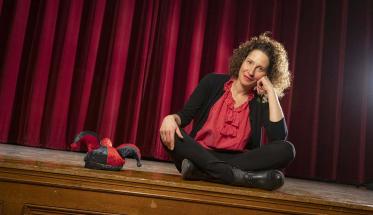 ’Tis the Season for Shakespeare

It’s February, and you know what that means: love is in the air, Hallmark’s making a killing, and heart-shaped candy is really close to being 75% off (just hold off for a couple more days, we know you can do it). In keeping with the most romantic month of the year, we sat down with Michelle Ephraim, WPI’s Shakespeare scholar and associate professor of humanities and arts, to share her passion for all things related to the Bard.

You don’t just wake up one day and become the Shakespeare scholar at WPI. Ephraim’s interest in Shakespeare’s work was sparked well before she’d read a single page of his writing for one reason: the fact that his work is extremely important.

“I’m a first-generation American, and I’ve always loved to read, but because I didn’t grow up in a house filled with books, Shakespeare held a kind of mystique for me,” she explains. “I knew of him before I had read any of his work, and I kept reading because of its complexity, which I found intriguing.”

Shakespeare can be scary—trust us, we get it. But the first step to approaching the Bard’s work, according to Ephraim, is not to be intimidated. Step two? See the work performed, either in the theatre, or as a film adaptation.

“His plays were written to be performed,” she says. “He had to please his audience, which meant that people from all different walks of life had to understand his plays. Seeing the words in the context of physical movements is incredibly important, and that’s a great way to get into Shakespeare as opposed to just looking at these complex words on a piece of paper.”

Ah, yes, Romeo and Juliet—Shakespeare’s tragic tale of two star-crossed lovers is often referred to as his most romantic work … by people who have never actually read it. “Oh, it’s the worst,” Ephraim says with a laugh. “It’s like what not to do in a relationship!”

A true romantic work of his, in her opinion?

The relationship between Beatrice and Benedick in Much Ado About Nothing.

Quote him on that

Google “Shakespeare love quotes” and you’re bound to find endless lists and websites devoted to sonnets full of roses and marriage and riches and stars, but according to Ephraim, it’s difficult to actually pin down a real romantic Shakespearean quote.

“Romance is hard,” she says. “Shakespeare was such a realist, and actually deeply cynical about love, so it’s hard to find a good quote when you take the words in their proper context.”

Her solution? A quick bit from As You Like It where two characters are described as being so in love that “clubs cannot part them.” To her, the quote is sincere while also showing a bit of Shakespeare’s snarky sense of humor.

This isn’t the only time she’s used the quote, either—it also graced the front of her wedding program.

“Raise a glass to Shakespeare”

William wasn’t the only member of the Shakespeare family with a claim to fame: although he ended up falling off the grid, his father, John, was also well known—but not for writing.

“He was very charismatic and acquired a number of elected positions in Stratford,” Ephraim says. “One of those was to be an official ale taster—which sounds so funny to us, but apparently it was quite a competitive gig to get, very prestigious. It would’ve been a real mark of status for him.”

Shakespeare at a tech school might seem an unlikely combination, but Ephraim says that’s not the case, and that her students are just as interested in the roles of Rosencrantz and Guildenstern in Hamlet as they are chemical equations, quadratic formulas, and engineering robots.

“They’re excited about the breadth of academic experience and learning they’re getting at WPI,” she says. “They’re ambitious students, happy to take literature courses, both Shakespeare and otherwise, and I can feel that excitement and enthusiasm.”