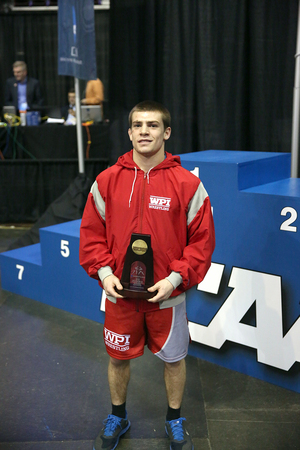 On the weekend of March 14–15, while many WPI students were enjoying the last days of spring break, two student-athletes were competing in championships on a national stage: In Winston-Salem, North Carolina, senior Laura Pumphrey attempted to break her own record at the NCAA Division III Track and Field Championship, while sophomore Brian Amato engaged in two of the most challenging matches he had ever faced at the NCAA Division III Wrestling Championships in Hershey, Pennsylvania.

Both students were the sole members of their teams to qualify for the national competitions—and both made history by receiving All-America honors, a distinction given to the top eight finalists in each event.

Pumphrey cleared a high jump of 5’5" to tie for fifth place, topping her eighth place finish at the 2013 championship and making her one of only two students ever from the WPI women’s track and field team to receive three All-America honors.

Amato won two grueling matches in overtime and went on to finish eighth in the 125 pound weight class, becoming the ninth WPI wrestler, and first since 1997, to achieve All-America status.

"I started wrestling when I was in third grade, so All-America is a goal I’ve been working towards since I was a kid," he says. "It was particularly meaningful because I able to take part in some really nail-biting matches against great competitors."

Pumphrey, who received All-America honors for indoor and outdoor high jumps in 2013, says that her final appearance at the indoor track and field national championship was both bittersweet and memorable.

"Even though I went the competition alone, my team was very supportive and I felt like everyone was there with me," she says. "It was also a great chance to meet other Division III students who are so committed to both academics and sports."

NCAA Division III athletes do not receive scholarships and do not typically pursue professional sports after college like many players in Divisions I and II. Amato and Pumphrey are shining examples of the Division III philosophy, which states that athletics should support academic goals and encourages players to pursue a variety of activities.

"Participating in sports is definitely a commitment—I practice five days a week and have meets every weekend," says Amato. "However, I find that I actually manage my time better during wrestling season, both because I’m forced to stay on schedule and because physical exercise provides much needed breaks." 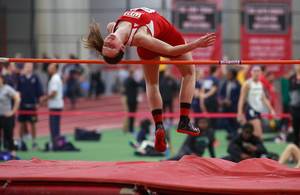 Senior track star Laura Pumphrey, one of only two
students ever from the WPI women’s track and field
team to receive three All-America honors.

​Amato, a biology major, is also a member of Zeta Psi fraternity and a cadet in Army ROTC, which recently awarded him the American Legion Military Excellence Award for academic achievement and character development. He traveled to Albania last summer as part of an ROTC language program.

Pumphrey is majoring in biomedical engineering and hopes to work for a medical device or biotechnology company after she graduates in May. She has also been a member and president of the WPI chapter of Alpha Xi Delta sorority and was a finalist for the President’s IQP Award for her team project on sustainable water management in Thailand. She echoes Amato’s sentiment that regular training helps balance her schedule and also notes that becoming a team co-captain honed her leadership skills.

"So many aspects of being involved in athletics have contributed to my academic success," says Pumphrey. "When I first came to WPI I was shy, but my track and field experience helped me become more confident and outgoing. My team has been a great support network, and being able to act as a leader and mentor helped me realize my full potential." 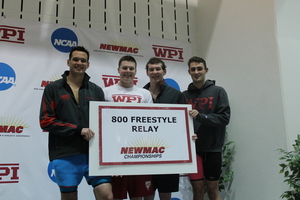 The WPI’s men’s swimming and diving team also impressed at their NCAA Division III championship event, held March 18–21 In in Shenandoah, Texas. The 800-yard freestyle relay team, made up of Andrew Bauer ’17, Nathan Hughes ’16, Alex Powers ’16, and David Smallwood ’18, garnered an honorable mention All-America by placing 16th with a time of 6:46.68. Smallwood also set a school record in the 200-yard butterfly by clocking 1:51.20 to finish 23rd, while Bauer broke his own record in the 100-yard freestyle with a time of 45.55 to finish 29th.