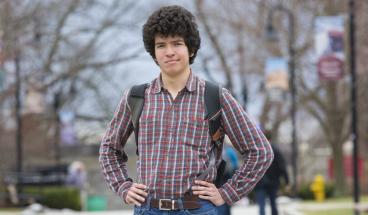 Gilbert Hernandez would walk 500 miles (and then he’d walk 500 more) if it meant more adventures, exploring, and stumbling across hidden gems in small towns.

Lucky for him, it does.

The mechanical engineering major spent his spring break, a time normally reserved for beaches and warm weather, walking across Massachusetts in rain, snow, and biting wind while sustaining himself on bananas, peanut butter, water, and Clif nutrition bars. Aptly calling it the Mass Hike, Hernandez took a train to Pittsfield, and spent the next seven days trekking 138 miles to South Station in Boston. 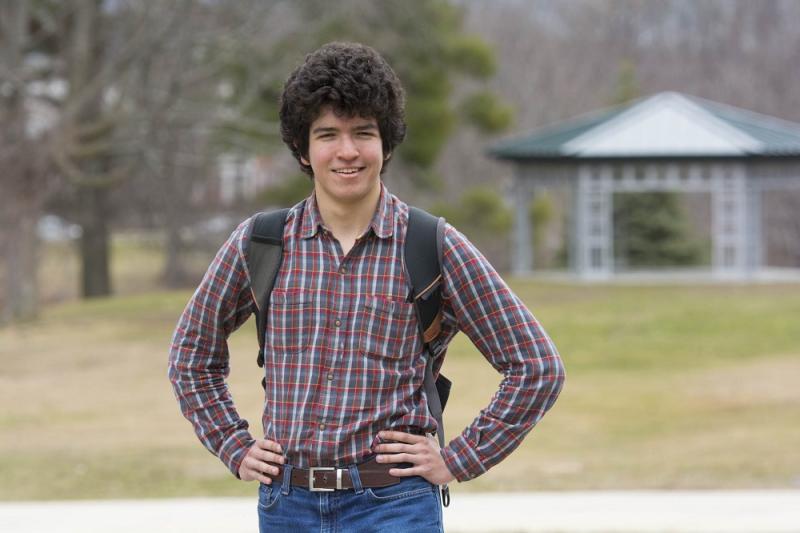 “I’ve done a big adventure every spring break since I’ve been at WPI, each one bigger and better than the last,” he says. “The original plan was to walk across Massachusetts vertically, between the borders of Connecticut and New Hampshire, but as soon as I considered the possibility of changing it to a lengthwise week-long adventure, the thought wouldn’t leave me alone.”

A few weeks before the trip, he told his parents and sister, who he says were “supportive, but rightfully worried during the walk.” His friends were informed about an hour before he left, and they were supportive, as well. “I told everybody else through Snapchat updates … some rightfully thought I was crazy,” he adds with a laugh.

Hernandez chronicled his adventure through vlogs that are posted on YouTube, and they’re definitely recommended viewing. Whether he was running into some local dogs, getting eggs right out of the chicken coop from one of his hosts, or expressing his dismay that he’d missed the opening day of a restaurant he’d been looking forward to eating at by five days, his energy and enthusiasm for his trip is infectious, and it’s easy for viewers to find themselves cheering him on as he goes.

“My takeaway is that capitalizing on and growing your talents and passions as much as you can—regardless of what they are—will soon lead you to success." -Gilbert Hernandez

During his walk, he was able to explore several Massachusetts communities he’d never visited before—his favorite was Northampton, which he says had a certain personality to it that made him feel welcome. His favorite part of the entire trip was when he walked the road (Route 143) before Chesterfield during sunrise. “It’s in a valley between hills filled with pines with whooshing creeks to the side. It ultimately led to Chesterfield Gorge, which looked like something straight out of a painting,” he says. A runner-up moment was crossing the Connecticut River on an old railroad bridge.

He ran into several hurdles that would make less-experienced walkers give themselves an A for effort and call it quits before heading for the nearest hotel, but he never considered returning home without completing his trek. Instead of getting discouraged when facing a town where nobody would answer their phones to help him out (thus throwing his plans of where to spend the night into limbo), downed wires across his routes, and minus 9° wind chills, among other obstacles, he would take a long break and give himself a good foot massage before moving on.

Hernandez considered the Mass Hike a big personal achievement, but nothing particularly newsworthy—he’s now been featured in the newspaper, on TV, and on the radio to discuss his walk. “My takeaway is that capitalizing on and growing your talents and passions as much as you can—regardless of what they are—will soon lead you to success,” he says. A more personal outcome: he learned that if he sets his mind to it, he can do anything he wants.

Although Hernandez would like to walk across Pennsylvania or New York next, he says the next states he’s set his sights on are Connecticut and Rhode Island, which he’ll complete in one go to knock out three of the 50 states.

If you’re ever considering a multi-day trek, Hernandez's videos touched upon a handful of tips on how to have a comfortable, blister- and leg cramp-free walk.