More than 2,100 pre-college students will attend this year

Many students are taking a break from their studies over the summer, but WPI is hard at work inspiring youth to continue with STEM learning while having fun in the university’s summer programs, in an effort to bring underrepresented students into STEM studies and careers.

From robotics to molecular biology to athletics, the programs are well attended—WPI will host more than 2,100 students this year.

The majority of the STEM programs and several of the athletic programs have waitlists, says Sue Sontgerath, director of pre-collegiate outreach programs at WPI. 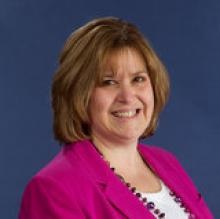 “For example, the Launch program has 217 students enrolled and another 252 on the waitlist,” Sontgerath says. “So, clearly, there is significant demand in the area for this type of programming.”

Every year, WPI expands the programs to meet demand, she says. Last year in the middle school and early high school programs, about 510 students attended, and this year 667 students will attend—more than a 20 percent increase.

The main reason WPI offers the programs, she says, is that as a STEM institution, WPI recognizes that it has a responsibility in helping bolster the STEM pipeline.

According to the National Science Foundation (NSF), the “STEM pipeline” refers to an education-to-work continuum that starts in elementary school, continues through higher education and then into a job. The idea of a pipeline is valuable, NSF says, to allow younger students to learn fundamental, and often cumulative, STEM and non-STEM knowledge and skills to prepare them for future education, training, and career opportunities as an investment in the future workforce and a “well-informed citizenry.”

Pre-college exposure can lead to the selection of a STEM major, Sontgerath points out. 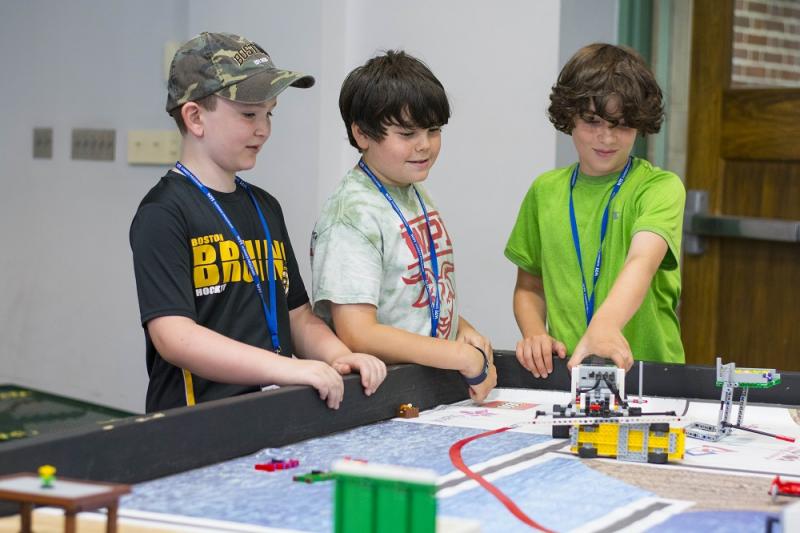 A group of campers participates in a summer program.

“We know that to get kids excited about STEM and STEM careers, we need to engage them early and often,” she says. “We need to demonstrate to all kids, but in particular girls and underserved students, that STEM fields can be fun and engaging, relevant to their everyday lives, and can make a difference in the lives of others. WPI is uniquely suited to do this because we are able to model our summer programs curriculum on our project-based undergraduate curriculum that fosters collaboration and teamwork.”

A secondary reason for offering summer programs, she admits, “is a bit more self-serving. Our hope is that students who are engaged in our pipeline will get to know WPI, feel like they are a part of our community, and end up applying to attend college here.”

And it seems to be working. Every year 60 to 70 students in the first-year class are alums of the Frontiers summer program, she says.

That is one of the reasons Destin Heilman, associate teaching professor of chemistry and biochemistry, has remained involved in the Frontiers program the last decade.

The biochemist says the Frontiers program services older students—rising high school juniors and seniors. The two-week residential program gives them a taste of what it’s like to be a WPI student, Heilman says. Each year, approximately 350 high-schoolers sleep in the dorms and eat in the campus dining halls while in the program to get the “whole college experience,” he says. 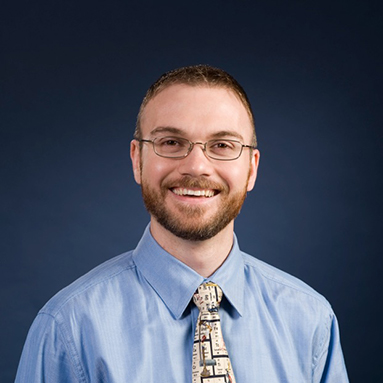 “It not only gives them a flavor of what doing college science looks like, but also gets them psyched about the fields,” he says.

Students start out the day with a short morning discussion on a STEM topic—like quantum mechanics or genetic engineering—to inspire them and get them excited and set up the theme for the day, he says. Then it's on to experimental labs including chemical purifications, genetically engineering a gene from a jellyfish into E. coli bacteria to make it glow, building batteries from scratch, computer modeling at the atomic level to determine what the structure is, or looking at the stars through telescopes.

“I do it because it's fun—that's the primary reason,” he says. “I like that the students are right on the cusp of college. They’re thinking about college and careers and what they want to do with their lives.”

He says the students’ parents also appreciate that after the program, their kids have a much better idea of what STEM fields are and what they can do with them.

“We talk about careers, salaries, and expectations to try to give them a really practical experience,” Heilman adds. “It's important to me. I want them to know where their careers in [STEM] will take them and for them to think of where their passions may be.” 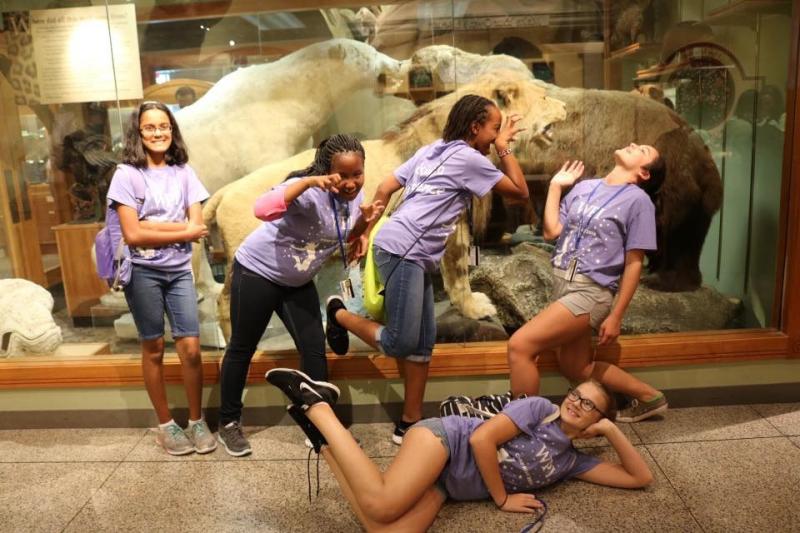 Campers strike a pose during a field trip as part of Camp
Reach.

Grace says there aren’t enough girls in STEM careers, and believes part of the reason is that girls get intimidated by boys, especially at the middle school level.

“Girls learn differently than boys,” Grace says. “Boys are all ‘hands on’ and tend to just jump in, and girls tend to stand back and wait a little bit to figure something out before they try to do it. Because of that, girls think boys know what they are doing and get intimidated and end up not wanting to do activities because they’re too intimidated to get their turn. The boys don’t realize they are taking over and not giving the girls a chance.”

She says that over the last few years, she has separated her teams by gender to see if participation by the girls improved. Attendance by girls increased dramatically, she says, going from only a few girls to the max of 10 with others on a waitlist, and they also participated all year in a STEM club at the middle school.

“It builds their confidence,” Grace says. “When people say ‘STEM careers,’ some girls have no idea what they are or what they would do. Especially here at WPI, during the summer program we can get them to understand that anything involved with science and technology is a STEM career. Then, we can bring them together with the boys and they are not as intimidated because they’ve done things.”

Conversation with the President

President Laurie Leshin sat down with Sue Sontgerath, director of Pre-collegiate Outreach Programs, for the Summer 2017 issue of the WPI Journal about how important these programs are to the future of WPI. Read the interview.