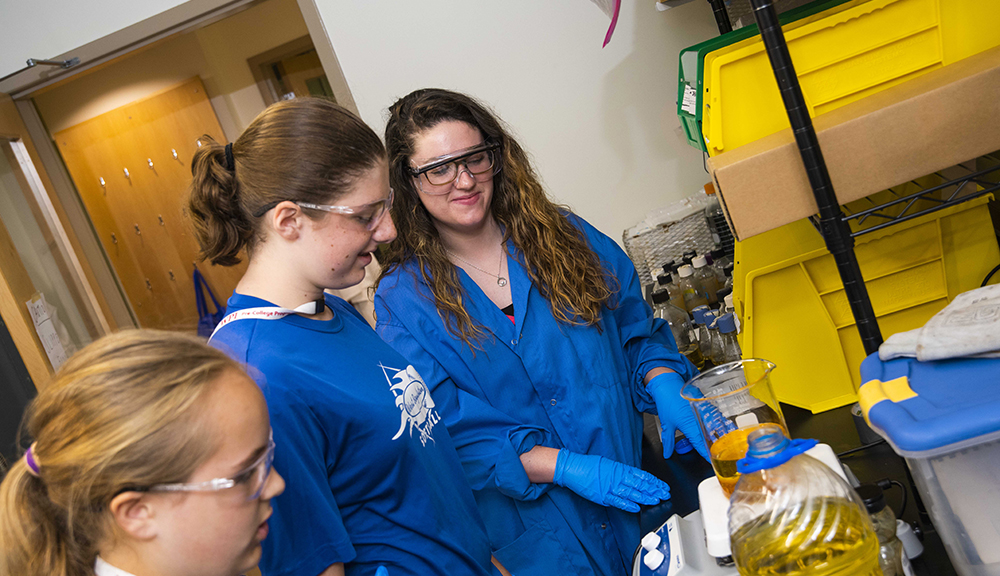 Calls Camp Reach “a major milestone" in her career path

When she was 13 years old, Roisin Donnelly hadn’t given much thought about a career in engineering. But then she attended WPI’s Camp Reach—the summer residential program for girls who have an interest in learning more about science and engineering careers—and everything changed.

“Before that I had no idea what engineering was. I had no interest in it,” says Donnelly, now 21, and a biomedical engineering student at Trinity College in Dublin. “If I hadn’t gone to Camp Reach I don’t know what I’d be doing right now. It was a major milestone in my career path.”

She recalls the camp’s many hands-on, kid-friendly experiments using household staples such as ice cream sandwiches, newspapers, and sunscreen for experiments, which made her aware of engineering’s omnipresence. “It was really incredible,” she says. “It taught me that everything around you was engineered in one way or another.”

That interest brought Donnelly back to WPI this summer for a 10-week Research Experience for Undergraduates (REU), which—in addition to working in a lab—included hands-on instruction with middle school girls at WPI’s Innovations in Biomedical Engineering (iBME) camp.

“The REU prepares students like Roisin for a career in biomedical engineering by exposing them to a research environment,” says Alycia Abbott, graduate student liaison for iBME and REU. “Roisin was a great fit for the REU program because, in addition to her enthusiasm for the field of biomedical engineering, she expressed a strong desire to teach/mentor other students and pay forward her experiences to encourage other young women to pursue a career in STEM.”

One thing that comes across when discussing her WPI experiences is how her time at Camp Reach triggered an adoration for the university. “I always keep an eye out on WPI’s summer happenings,” she says. “It’s such a friendly, empowering environment.”

“Before [Camp Reach] I had no idea what engineering was. I had no interest in it. If I hadn’t gone to Camp Reach I don’t know what I’d be doing right now. It was a major milestone in my career path.” -Roisin Donnelly

In addition to her work at the lab, working with girls in the BME camp this summer was what Donnelly calls “the icing on the cake.” She led them in research of the impact of sound on the inner ear. “This is a key time in these young girls’ lives,” she says. “I’m glad I was able to show them that science is cool, that engineering is fun, and that I can encourage and inspire them to love it as much as I do.”

Abbott says Donnelly was a great fit for the iBME. “Roisin’s group needed very little help from me. Every time I checked in on the group, the campers were very excited to talk about their project and to show me the ear model they were building,” she says. “I think Roisin created a great project for the girls that gave them the freedom to explore an area of biomedical engineering and to help them see the connection between BME and everyday life.”

Suzanne Sontgerath, director of Pre-Collegiate Outreach, says Camp Reach tends to have a lasting impact on its attendees.

“Because of the community aspect of Camp Reach, many campers stay in touch with other campers throughout high school and beyond. They come back for academic year outreach programs, reunions, summer programs, and to be a Camp Reach counselor in high school,” Sontgerath says. “We know that multiple touchpoints are much more effective in helping build a STEM identity in a student than a one-time intervention. Providing this continuous pathway for the girls to stay engaged in STEM and engaged with WPI has definitely yielded some excellent results. In this year’s senior class, for example, there are six women out of the 30 who attended Camp Reach in 2009.”

Donnelly is now preparing to return to Trinity College, where she will graduate next year and head to graduate school. “I really think I have a shot at helping people,” she says. “I have a powerful voice."

WPI hasn’t seen the last of Donnelly. “I’ll be back, for sure,” she says.