What Is the Clery Act?

Under the Jeanne Clery Disclosure of Campus Security Policy and Campus Crime Statistics Act, or simply the “Clery Act,” all colleges and universities are required to supply timely warnings to students, faculty, and staff. Anytime a crime has occurred or is occurring that poses a serious or ongoing threat to the rest of the campus, the college must provide timely warnings in a way that is likely to reach every member of the campus community. At WPI, this is accomplished with email announcements, text messages, or other appropriate means.

The Clery Act also requires colleges to separately report crimes and offenses that occurred in residential housing, as a subset of the on-campus category. The Clery Act is enforced by the United States Department of Education.

The Title IX Act is a civil rights law that focuses on prohibiting discrimination on the basis of gender in education programs and activities of educational institutions. The U.S. Department of Education’s Office for Civil Rights (OCR) clarifies that sexual violence is a form of sex discrimination; therefore, colleges and universities have specific responsibilities for addressing sexual harassment, sexual assault, and other gender-based forms of violence.

History of the Clery Act

The Clery Act was signed into law in 1990 after the 1986 rape and murder of Jeanne Clery, a 19-year-old college student.

The Clery Act requires colleges and universities that participate in federal financial aid programs (known as Title IX schools) to disclose information about crimes occurring on their campuses as well as to have specific campus safety and security-related policies and procedures in place.

Colleges and universities must comply with the Clery Act and the Title IX Act, both of which address sexual violence incidents. 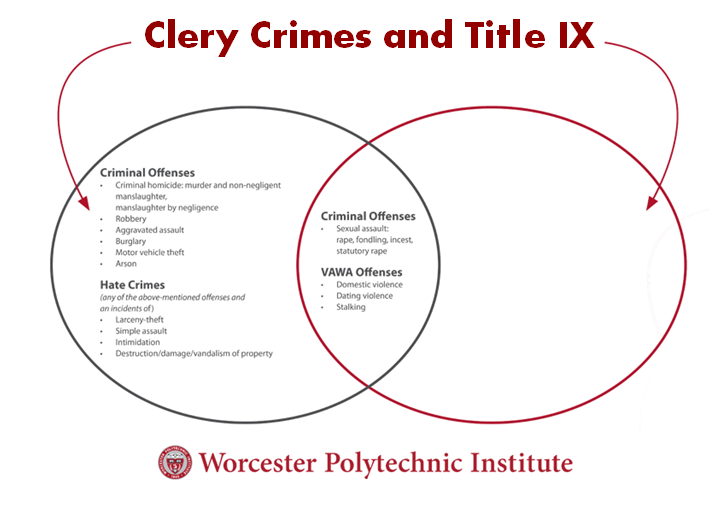 The Campus Save Act was part of the reauthorization of the Violence Against Women Act (VAWA), which includes domestic violence, dating violence, and stalking. The VAWA crimes are included in both the Clery Act and the Title IX Act.

For additional information about the Clery Act and/or the Title IX Act and how they apply to WPI, contact the Title IX Coordinator/Clery Compliance Administrator.