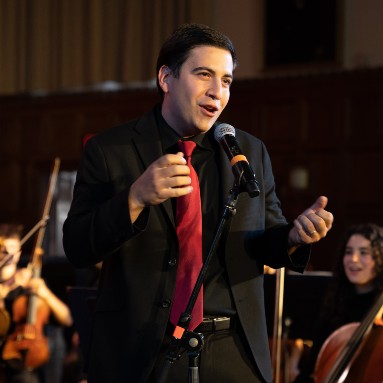 Matthew Scinto is an emerging conductor based in Cape Cod, where he currently serves as Founder and Music Director of the Cape Cod Chamber Orchestra and Visiting Director of Orchestra at Worcester Polytechnic Institute. He has twice studied conducting at the Tanglewood Music Center, was recently finalist for the Assistant Conductor of the San Antonio Symphony, and also currently serves as a cover conductor for the Portland (ME) Symphony. He received his Doctor of Musical Art's degree from Boston University, where he received the Conducting Department Award for Excellence in Conducting.

As the Founder & Music Director of the Cape Cod Chamber Orchestra, he has established the only professional chamber orchestra serving the region, with a mission to commission music collaboratively with individuals and organizations. Since 2018, the orchestra has completed and premiered numerous works with organizations such as the Heritage Museums & Gardens, the Guild of Harwich Artists, the Whydah Pirate Museum, and the Edward Gorey House. Working across disciplines has proved to be an effective way to build audiences, creating concerts that highlight the gems and rich history of Cape Cod. Recently the orchestra was awarded the 1st PRIZE in the American Prize Competition for Orchestra performance in 2020, and was recently named "Best New Cultural Attraction" by Yankee Magazine in 2019.Dr. Scinto has been involved in Alzheimer’s care for the past several years, working with memory care facilities at Maplewood Senior Living in Brewster, MA and Bridges in Mashpee, MA. He is also a frequent guest of the Arts & Ideas program with the Alzheimer’s Family Support Center of Cape Cod for caregivers and loved ones with memory loss. By using aspects of music appreciation and conducting, Dr. Scinto has developed curriculum for working with individuals dealing with memory loss in order to allow them to reconnect to their loved ones and enjoy fun movement to music.​