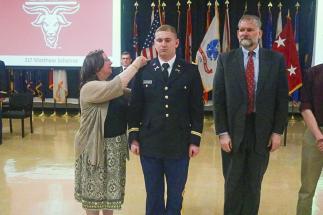 New 2nd lieutenants commended for accomplishments and commitment, will train in a range of military fields

The officer corps of the U.S. Army and Air Force will be augmented by newly commissioned second lieutenants going into pilot training, cybersecurity, and training programs for engineer and infantry officers, after 10 cadets transitioned into officers in the armed forces from WPI’s ROTC programs.

The four Army and six Air Force officers were commissioned in separate ceremonies in May that were shared with friends and family via Zoom and Facebook Live. The ceremonies were coordinated to comply with COVID-19 distancing protocols.

During the Air Force commissioning, Lt. Col. Jack Skiles III, Commander, Detachment 340 Air Force ROTC, commended his detachment for garnering the honor of number one in the nation out of 145 detachments.

“That is no small feat, considering the size of our detachment, which is really small, and the fact that we’re all such big nerds,” he said, evoking some laughter. Additionally, the WPI detachment ranked third regionally and fifth in the nation in GPA. “This is a highly competitive program,” he said.

“The cadets are about to take the oath of office to transition from a civilian to an officer in the greatest air force in the world,” Skiles said in addressing the attendees. “They will swear to defend the Constitution of the United States against all enemies. This is a huge commitment.

“President Kennedy said it this way: ‘Let every nation know, whether it wishes us well or ill, that we shall pay any price, bear any burden, meet any hardship, support any friend, oppose any foe to assure the survival and the success of liberty.’”

The following cadets were sworn in as Air Force officers:

● James Maxwell (Mechanical Engineering) will be assigned to Los Angeles AFB in California.

This is a great day to be an American soldier in the world’s most professional, powerful, and capable United States military.

The Army ROTC program took place at Fort Devens, with cadets from UMass Lowell and Fitchburg State commissioned in the first ceremony, Worcester State and Clark University cadets sworn in during a second, and WPI cadets commissioned in their own ceremony.

The new officers from WPI:

● Michael Cullen (Mechanical Engineering), commissioned into the Massachusetts Army National Guard as an Engineer Officer. He served as the Cadet Battalion Operations Officer this year.

● Matthew Scherrer (Electrical and Computer Engineering), commissioned into the Active Duty Army as an infantry officer and future signal officer. He served as the Cadet Battalion Command Sergeant Major this year.

● Jonathan Zimak (Computer Engineering), commissioned into the Massachusetts Army National Guard as an engineer officer. He served as the Cadet Battalion Commander this year.

President Laurie Leshin congratulated the new officers via video message. “All of WPI is so incredibly proud of your achievements while students and while going through the ROTC program. We’ve seen you rise to the occasion time and again, but never more than in this most unusual D-Term.

“I want to thank you for your service to our country, for your commitment during this uncertain time, and to tell you just how proud I am of you. And on behalf of all the faculty and staff at WPI, a hearty congratulations, lieutenants. Way to go!”

Lt. Col. Adam Heppe, head of WPI Military Science, pointed out that 10 percent of Bay State Battalion was activated by the governor to be on the front lines of the state’s COVID-19 response. “They answered the call and fulfilled their duty,” Heppe said. “They exhibited agility and flexibility, attributes that are required for our future leaders. … Congratulations. You’ve worked diligently to earn this commission.”

“These young warriors are ready to lead the nation’s sons and daughters. It’s been my honor to be your professor of military science for these last two years and see you accomplish your goals. This battalion has a long and proud history of producing senior leaders.”

The Army cadets were sworn in by Maj. Gen. Robert Catalanotti, who retired in 2014 after almost 35 years of service commanding both active and reserve organizations. He finished his career as Director of Strategic Exercises and Training at U.S. Central Command. He was commissioned in the U.S. Army in 1980 from WPI’s ROTC program upon graduating from Assumption College, and was inducted into WPI’s Army ROTC Hall of Honor in May 2016.

“This is a great day to be an American soldier in the world’s most professional, powerful, and capable United States military,” Catalanotti told the gathering before offering his congratulations and some words of advice as they assume their command roles.

“Be an outstanding role model. Don’t complain to your soldiers, and help them succeed and achieve. Admit when you make a mistake. … Be a team player, and a team builder. Give credit to others. Work at increasing your competency. Broaden your critical thinking and leadership.”

“Work at perfecting your skills each and every day. Be the very best that you can be, and always lead by example, in everything. In appearance, in physical fitness, in ability, in ethical reasoning,” he said. “Know right from wrong. Always lead from the front, and always be willing to walk in harm’s way.”