When Washington state native Hannah Gallagher arrived at WPI last summer, she knew her experience over the next four years would be whatever she made it. But Student of the Year was still unexpected. 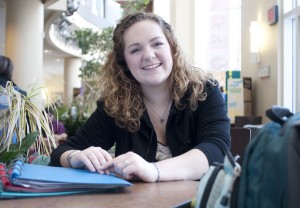 Hannah immediately became a spirited member of several organizations, always sharing her enthusiasm for WPI. Thanks to her  campus involvement and her excellent academic record, she was recently one of eight college students nationwide to win a First Student of the Year award from the National Association of College and University Residence Halls (NACURH).

Modest about the award, Hannah says she felt honored to have others recognize her involvement and commitment to WPI. “I couldn’t have done this without my advisors and the support of the council,” she points out. “This is not the Hannah show!” Each of the eight regional winners will present a bid for consideration for the national award to be presented at a banquet in May.

In a letter of support for Hannah’s bid, Mike Hamilton, co-advisor of the RHC, noted her  “awesome enthusiasm and leadership” and said her “energy for life and RHC is unending.”

Hannah with her First Student of the Year Award

Hannah learned of the First Student of the Year award when an RHC executive board member said she should submit a bid.  “I had no idea it was offered,” recalls Hannah. “I wasn’t sure if I wanted to do it and if I wanted to put the time into it.”  Encouragement from her dad changed her mind and she started to put her bid, based on Pitch Perfect, together. “I just kind of went with it and had fun,” she says.

Founded in 1954, the NACURH is thought to be the largest entirely student-run organization in the world. The organization promotes the best residence hall experience for students, and it offers resources to help students do just that. Hannah has been an active member of the residence hall council for Morgan Hall, where she has been director of administration since August.

“It is especially important your first year,” Hannah says of living in a dorm. “This is how I met all my friends. You build such a strong base to carry you through your four years.” And having a positive and fun dorm experience is important. “It is a crucial part of getting to know people, to learn about yourself, and about how to get along with people,” she says. “And it should be fun.”

Surprisingly, Hannah says she was not involved in all kinds of high school activities, preferring to focus on her studies and a couple part-time jobs. “When I got here, there were so many great opportunities, I had a hard time saying no to anything,” Hannah admits. In addition to RHC, Hannah is a member of the Student Alumni Society and Alpha Xi Delta, and is a student ambassador with the admissions office. In between all that, you can also find her working at the office of corporate and professional education on campus.

“I want to give back to this campus as much as it has given me,” Hannah says. “I’ve had such a  good experience here.”