Nearly 20 employers are in the Odeum today to interview students

Yesterday’s Fall Career Fair drew nearly 2,500 students and alumni to the Sports and Recreation Center in hopes of landing jobs, co-ops and internships.

The four-hour fair had nearly 550 representatives from 200 employers talking with and looking over resumes of job seekers, and setting up further interviews. Some of the companies held programs last evening and nearly 20 others will be in the Odeum today to interview students they met at the fair, says Bailey Rand, assistant director of employer relations in WPI’s Career Development Center. 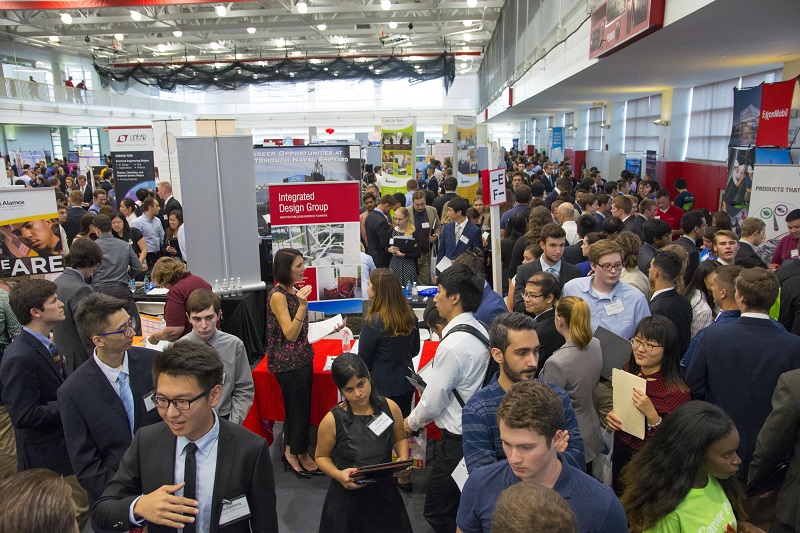 “We had about 2,500 come through today. That’s about the same as last year,” Rand says of those seeking employment, internships, and co-ops. About 50 of them were from other colleges and universities in the Worcester area.

“About 20 companies who were at the fair will be back on Thursday with students they met at fair,” she says. “The interview day is a great opportunity for companies to learn more about prospective candidates and can assist companies in making hiring decisions.” Google was to have a tech talk last night, with Analog Devices holding an informational session. This evening, Microsoft is slated to hold a tech talk, according to Rand.

“Also, there will be companies here on Friday and throughout the next two and a half weeks conducting interviews and informational sessions," she says. "We’re basically booked through A-Term.”

Katelyn Enman of the National Fire Protection Association said that she had a lot of students stop at her table. “We don’t have many full-time jobs right now, but we have a lot of internships open,” she said “We generally have four or five students come in over the summer. We’ve talked to a lot of great people.

“What we’re offering today are generally engineering internships. So, we’re looking for someone already in the FPE master's program, or undergrad, someone who’s in mechanical or chemical engineering, who’s already part of the masters’ program.” 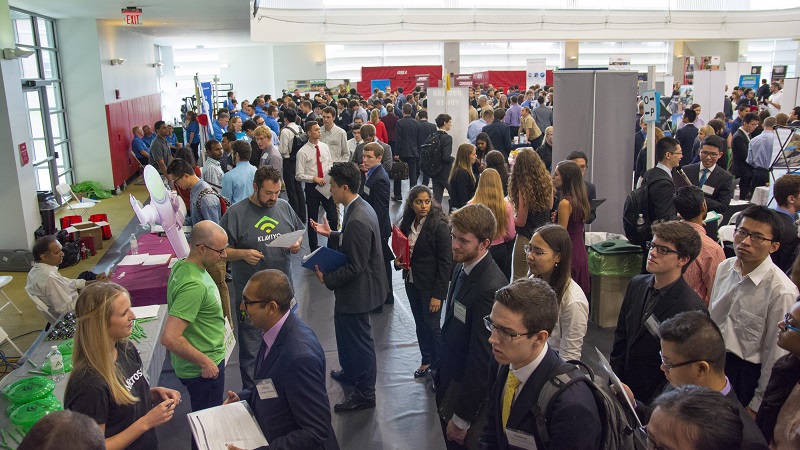 Some companies will remain on campus Friday and
throughout the next two and a half weeks conducting
interviews and informational sessions.

Pointing out that WPI is one of a few universities in the country with a fire protection engineering program, she said, “That’s really the type of engineer we want working for us.”

Kyle Rowe, a master's student in the information technology program, spoke with a variety of companies during the day.

“I talked with Liberty Mutual, Dell-EMC and GE. Those are my top three,” he said. “Also, Silicon Labs was a really interesting company that I really didn’t know. I will be talking with them more.  … GE saw my work experience, and wanted to introduce me to the operations management development program. I did something similar with Hess Oil, so I’m familiar with the concept of it, and they were really trying to turn me towards doing that. They said it would give me a lot of exposure to upper management.”

Ashwin Sathy who plans to complete his master's in IT next May, said the fair was fruitful, having two interviews scheduled for today.  “The reason I’m looking for an internship is I want to make sure that I and the company I’m looking for could be a right fit for each other," he said, "and once we gauge each other, it would be a win-win situation for them to work me into a full-time opportunity.”

“It really helps you to be able to connect with the individuals across all these companies to know more about what their company does and what they’re planning,” Sathy continued. “I think it’s more of a networking event than a career fair event, and that’s what I think it should be intended to.”

Sydney Baker ’13 now works at General Electric, a customer improvement leader in power services quality. She spoke with several job candidates and was impressed by their experiences and qualifications.

“I’m always blown away by the quality of WPI students. Every year the students are doing more engaging projects and more advanced coursework,” she said. “We had a lot of interest at the GE stand today. The line was always long.

“There seems to be a good match between what WPI students are looking for and what GE is offering. I was specifically recruiting for the operations management leadership program. It’s rotational program in IT, supply chain, and manufacturing, but as a GE team, we’re recruiting for more positions in the power space, and co-ops across all of our businesses.”

She said that what keeps GE coming back year after year is the caliber of the students. “They’re so motivated to make a difference in the world, and that resonates with GE’s culture,” she said “We’re working on problems that matter. We generate a third of the world’s electricity, and we have an airplane take off every two seconds with a GE engine. Our MRI helps diagnose diseases. So, I think those missions resonate with the students and we always feel a connection with the students whenever we come here. We want to keep coming back.”

“The Career Fair Plus App was the main platform students and alumni used to research companies in preparation for the event and to navigate the table map during the actual event,” says Rand. She reports that the Career Fair Plus App had 2,195 unique users and over 200,000 page views yesterday, the highest ever seen.