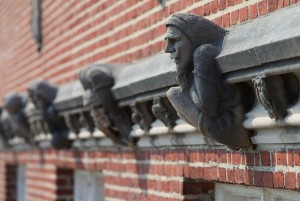 They sit perched high above the campus—silent but staring. Their hard façades reveal nothing as they watch generation after generation of students, faculty, and staff on campus: What are you doing? Where are you going? Where have you been? No one is exempt from their stone-faced stare. They are the grotesques of Worcester Polytechnic Institute.

A total of 34 grotesques look down from Alumni Gymnasium; some make themselves visible, displayed on the long north and south walls of the gym, while others lurk on the corners and along the shorter walls. Unlike their counterparts (gargoyles, whose function is to spout water), the grotesques’ sole purpose is to guard the building they have called home for nearly 100 years.

Most of the grotesques are caricatures of athletes playing a sport WPI offered when the building was constructed in 1916. Some of the carved limestone figures represent football, shot put, and boxing, but there are others: spectators clapping their hands; singers with sheet music; musicians playing instruments.

Their overall appearance is not terribly frightening, but can be unnerving if they bear a resemblance to a tough professor or perhaps a reminder of what lurks in nightmares when a term is coming to an end and the course work is not done. 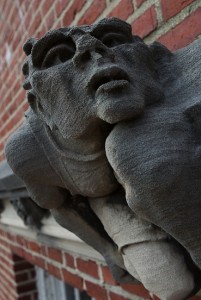 And for those who believe the grotesques’ reign is coming to end (with the demolition of Alumni Gym to make way for the Foisie Innovation Studio), think again. The grotesques will be salvaged and their watchful eyes will reappear when you least expect it.

A bit of background: This past spring, the Board of Trustees approved construction of the Foisie Innovation Studio, which will comprise 40,000 square feet of academic space, and 35,000 square feet (at the top of the building) for a residence hall for approximately 140 students.

Gensler Associates was selected as the architect of the Foisie Innovation Studio. Construction is slated to begin next summer, with the opening of the building planned for August 2018.