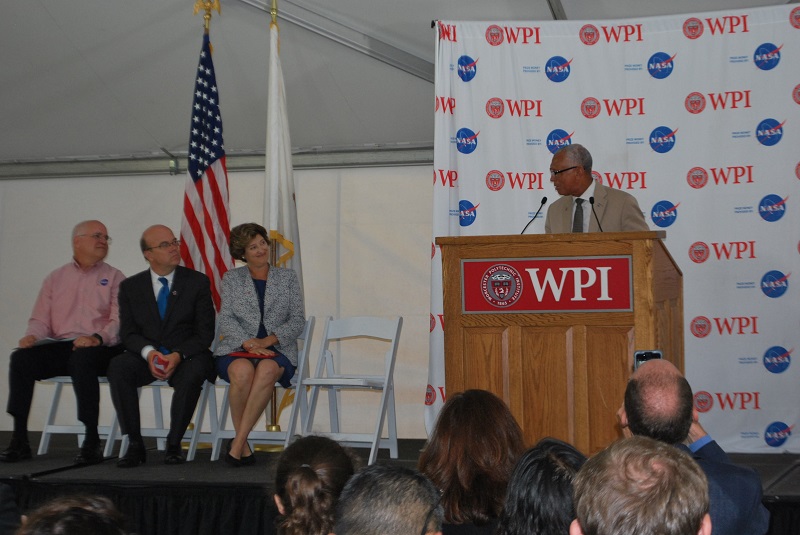 After 5 years, NASA has a Centennial Challenge winner

• Five consecutive years of NASA Centennial Challenge robotics competition, held at WPI, culminated yesterday with a visit by NASA administrator Charles Bolden Jr., who presented a check for $750,000 to the winning team from West Virginia University.

The Sample Return Robot Challenge, sponsored by NASA’s Space Technology Mission Directorate, offered a total $1.5 million to teams that could demonstrate an autonomous capability to locate and retrieve specific sample types from various locations over the wide and varied terrain of Institute Park and return those samples to a designated zone in a specified amount of time with limited mapping data.

Over the past five years, more than 40 teams have vied for bragging rights and the $1.5 million top prize.

The competition area included open rolling terrain, granular medium-soft soil, and immovable obstacles such as trees, large rocks, and water. A pre-cached sample and several other samples were located in smaller sampling zones within the larger roving area. Teams were given aerial/geological/topographic maps with appropriate orbital resolution, including the location of the starting position and a pre-cached sample.

Samples had different point values and the prizes were determined based on the scores for number and point value of samples collected and returned to the starting location. In order to win a Level 1 prize, a robot would have to autonomously navigate at all times and retrieve a pre-cached sample within the 30-minute time limit.

During the award presentation on the Quad, Bolden thanked President Leshin for sponsoring the Sample Return Robot program and assisting the U.S. space program.

“It’s great to be here at WPI, at what I call the front lines of innovation, at school that really puts the field of robotics our front,” Bolden said. “Recognizing these great sample return robot teams today is another milestone on our journey to Mars. These efforts are advancing our abilities on many fronts. One day, robots like these will be able to assist humans to study Mars from the planet’s surface.”

Rounding out the second and third places were MAXed Out, of Santa Clara, Calif., and Team Survey of Los Angeles, respectively.

Bolden said that NASA’s journey to Mars will rely on many robotic capabilities, including some demonstrated during the competition held here.

“Technology drives exploration, and the technology you’ve been working on shows progress and maturity,” he said. “That’s just how we’re going to get to Mars. A stepping stone approach that builds on successive milestones, moving us from lower orbit to deep space and onward to the Red Planet.”

Leshin recalled meeting Bolden, a former Marine aviator and astronaut, after he was appointed director in 2009 by President Obama. Earlier in her career she served as the deputy director of NASA’s Exploration Systems Mission Directorate, where she was responsible for oversight of NASA’s future human spaceflight programs and activities. She also served as the director of science and exploration at NASA’s Goddard Space Flight Center.

“This challenge is near and dear to my heart,” Leshin said, pointing out that she is a member of the Mars Curiosity science team, and someone who has worked to advance the efforts to bring Mars samples to Earth. “It’s really exciting today to see the space technology mission directorate so successful in advancing innovation.

“I’m thrilled to see the technological advances toward the key part of our journey to Mars. I look forward to the day when the technologies brought forth here will enable that first Mars surface sample return mission. It’s going to be a great thing.”

Yesterday’s announcement comes as NASA readies for tomorrow’s (Sept. 8) launch of the Regolith Explorer spacecraft, which will travel to a near-Earth asteroid, called Bennu, and bring at least a 2.1-ounce sample back to Earth for study. The mission will help scientists investigate how planets formed and how life began, as well as improve our understanding of asteroids that could impact Earth.

The launch is scheduled for 7:05 p.m. As planned, the spacecraft will reach its asteroid target in 2018 and return a sample to Earth in 2023.