Should apps like Tinder be banned? That’s the question up for tongue-in-cheek examination at the annual meeting of the world-renowned Cambridge Union Society debate team and WPI’s Guerilla Improv comedy troupe, March 25 at the Rubin Campus Center Odeum. 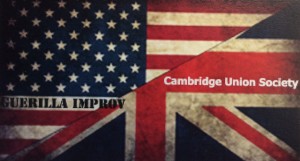 The CUS, a 200-year-old organization based in Cambridge, England, is considered one of the best debating societies in the world. The upstart Guerilla Improv is not. But for 15 years, the groups have combined their respective talents to give their audience a lot of laughs—and something to think about.

This year, the British debaters and the Yankee comedians (aka “fake debaters”) will each send two members of their respective teams to argue for each side of the topic: “This house believes we should ban such apps as Tinder.”

“We plan to make it light-hearted and entertaining,” says WPI junior Anthony Ward who, along with Travis Norris ’18 , Dolan Murvahil ’15, and grad student Joe Szafarowicz, will represent Guerilla Improv. The students debating from CUS are Ruby Holmes, Tim Squirrell, Arun Shanmuganatham, and Muhammad Asadullah Khan. 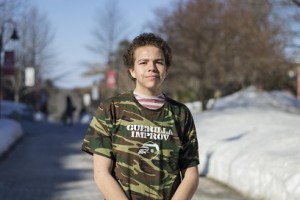 Guerilla Improv member Anthony Ward said
the debate with the Cambridge Union Society
promises to be light-hearted and entertaining.

Ward, a GI member for about a year, has not been in the CUS-WPI debate before, nor has he attended previous events. Part of the Guerilla Improv tradition, he says, is to send neophytes to the battle of wits and witticisms.

But Ward’s not worried; spontaneity is what improvisational comedy is all about. “I’m just looking forward to interacting with a debate team, putting their actual debate skills together with my fake debate skills. The result will be entertaining and provocative,” he predicts.

The Cambridge Union Society usually debates under more serious—though no less entertaining—circumstances. The Society was founded in 1815 as an amalgamation of three College debating clubs—Trinity, St. John’s, and Gonville & Caius Colleges—after a drunken brawl involving the three clubs’ members, according to the organization’s website. During the past 100 years or so, however, the Union has been addressed by nine presidents of the United States and by every British Prime Minister. It counts the Queen’s husband as an honorary member, and the Heir to the Throne, His Royal Highness the Prince of Wales, is a full life member from his time as an undergraduate at Trinity College.

The CUS began its annual tour in 1986 and WPI has been one of its stops for the past 15 years, according to Jim McLaughlin, assistant dean of student programs/director of the Rubin Campus Center. At the time, WPI had no debate team, so a few students who’d had high school debate team experience volunteered to participate in a lighter version of a debate. The topic was “The UK as the 51st State.”

In the second year of the WPI-Cambridge series, McLaughlin convinced WPI’s Guerilla Improv comedy troupe to engage the Cambridge Union Society, which they’ve done each year since. Past topics have included “This house believes we should weaponize space,” “This house believes children should only be told politically correct fairy tales,” and “Should talk show hosts rule the world?”

Debate day begins with the Cambridge Union students and their WPI hosts having lunch in WPI’s Higgins House, a British-style mansion that took 2½ years to build, using workers and materials shipped here from England. The teams practice for three hours and then have dinner in tuxedos prior to the debate.

At the event, each student starts with a proposition and a debate point. During the discussion, the teams allow audience members to come up and make points or ask questions. McLaughlin says a lot of the humor comes out watching two groups of very bright students interact out of their comfort zones.

“It’s just a funny program with a lot of laughter,” he adds. “You ask yourself, ‘Where can they go with that?’ And then you’re amazed at where they go.”

WPI is the first stop for the Cambridge Union group, which will go on to UMass Lowell, Trinity, Central Connecticut State, Iona, Albertus Magnus, and a two-day residency at Hofstra.

The event is free and open to the public. For more information on CUS, visit https://cus.org/.