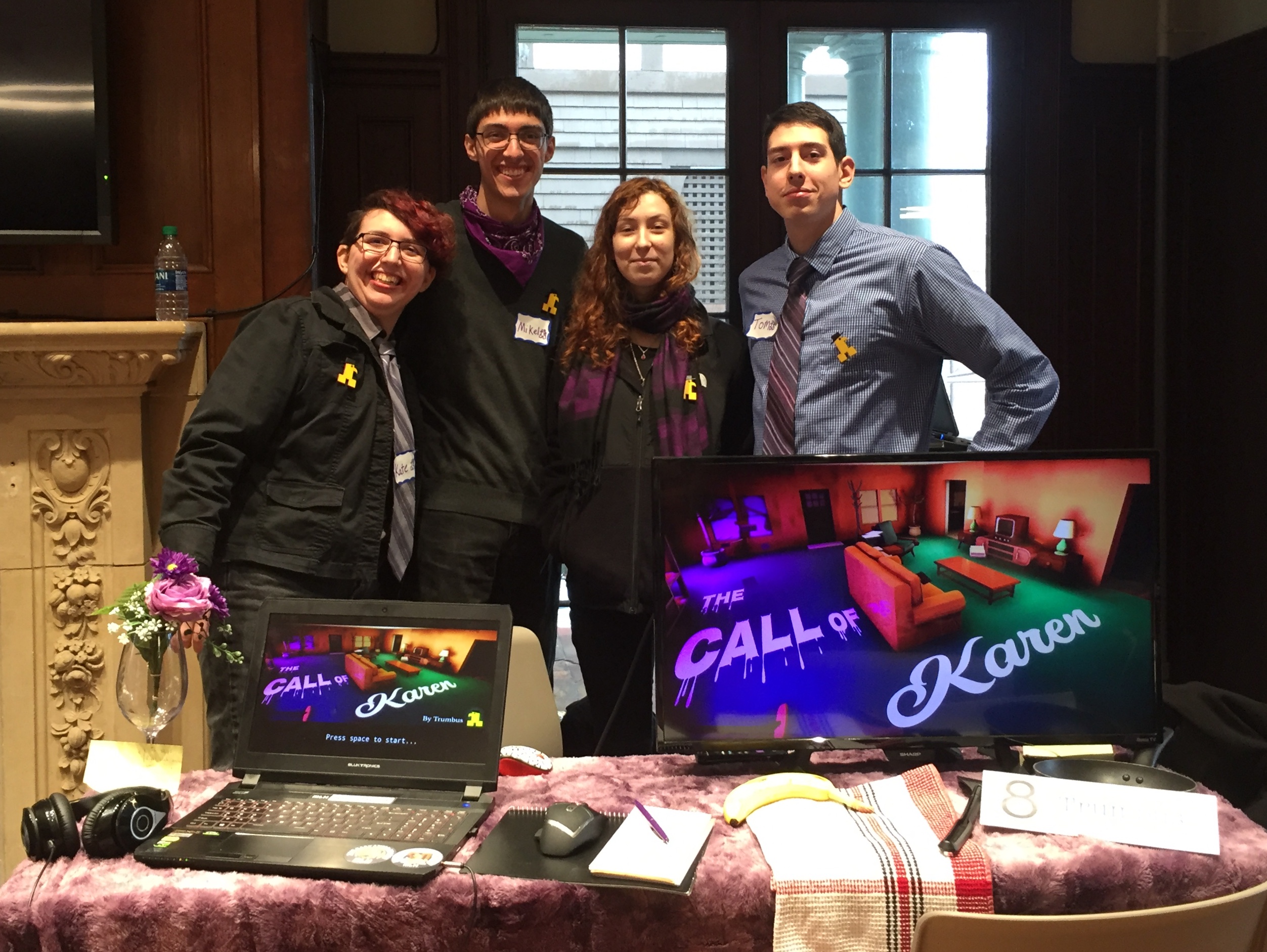 WPI students know project work is a given, and every student completes a Major Qualifying Project (MQP) before graduation. While this professional-level project is known for its challenges, it’s also an excellent example of the teamwork WPI students do so well.

For the four members of Team Trumbus—Diana Kumykova, Kate Olguin, Thomas Tawadros, and Mikel Matticoli—the MQP marked their professional beginnings and brought home the reality of how good teamwork makes a difference. Their MQP produced The Call of Karen, a PC (personal computer) comedy simulation game released in July and now owned by more than 100,000 players around the world.

Described as a game in which “a 1950s suburban housewife’s home is invaded by Cthulhu [a cosmic monster created by horror fiction writer H. P. Lovecraft],” this social game explores serious themes even as it provides entertainment. “We found that this concept was funny and allowed us to deconstruct the idealization, nostalgia, and misogyny so often found in media about the 1950s,” says Kumykova ’21, a computer science and interactive media & game development (IMGD) major.

Deciding to Use Karen

The name itself was a cheeky reference to Lovecraft’s The Call of Cthulhu, but the social references for the name Karen have taken a different, more negative, turn since early 2019 when the team named the game.

“At that time, the name did have a bit of a negative connotation, but not like it’s become in the past year,” says Tawadros. “We picked this title because the name Karen was more popular in older generations, which nicely fit our 1950s housewife main character. During playtesting we had a few people comment that the Karen in our game was definitely not a “Karen,” and that was pretty much our intention. We wanted to portray our Karen as a caring mother. Even if it wasn’t what people expected, the provocative name became de facto marketing for the game.” [A New York Times article last summer noted “the (Karen) moniker has most recently morphed into a symbol of racism and white privilege.”]

According to the website overview of the game, “You play as said housewife, Karen, who is trapped in an unhappy marriage taking care of an ungrateful child.” Karen navigates through daily struggles and tasks “… that a suburban mom would do as her house slowly descends into chaos!”

Features include intense physics-based vacuuming, cooking, and cleaning, as well as “the experience of slowly losing your mind” in the face of sinister “madness.”

Team members noted the intense MQP process was valuable to meeting their ambitious game-design project goals. They wanted to simultaneously create engaging game play while promoting the message of the game, but finding the right theme and the right game wasn’t simple.

Advisor Farley Chery, assistant teaching professor in IMGD, says the team displayed a determination through a long iterative process. “They pitched to me for three months,” he says. Throughout the back-and-forth process, the brainstorming process produced some “really horrible ideas,” says Chery, laughing. “And also some that sounded really amazing. I challenged them to run with it, to do more, and to have a good scope.” The discussions, he says, gave them all a chance to talk about ideas, choose the best pieces of each, and develop those into what became The Call of Karen.

The experience provided opportunities to collaborate with IMGD peers, and the work gave the students skills they will use immediately. “When it comes to getting a job in the games industry, the most important thing is making games to put on your portfolio,” says Team Trumbus member and IMGD alum Olguin ’20. “A project-based curriculum is ideal for those who want a career in the games industry.”

Learning the Value of a Team-based Approach

As the students worked toward a common goal, they also worked within the nuances of a dedicated team. “The result was an efficient team that avoided internal conflict,” says Kumykova.

“Learning to work intimately with a small team over a long period of time really showed me the value of communication,” says Tawadros ’20, an IMGD major with a technical art concentration and a minor in computer science. “I believe my MQP was my most important achievement. I say ‘my,’ but it was and really could only have been a team effort.”

As with many professional projects, the students realized their project wasn’t going to happen without careful planning and forethought. “I was so impressed by how The Call of Karen team really hit the ground running,” says advisor Gillian Smith, associate professor of IMGD and computer science. “They took time to plan their game over the summer before their MQP started and set their sights high,” she says. “They knew they wanted a polished game by the end and carefully planned out all their project milestones to be able to achieve it.”

And, Kumykova says, developing The Call of Karen met an academic requirement while also building a game for professional commercial release. Despite headache-inducing software glitches and the many COVID-19 restrictions that prevented showcasing the game in public venues, the team says having a student body of gamers who were ready to test the product at different stages was invaluable to fine-tuning the game.

Starting with a Small Idea

Noting that many of the review sessions felt more like a peer review, Smith adds that the students navigated a fine line that seasoned game design pros grapple with. “They took on a very difficult design challenge that professional designers also struggle with: how to create a cultural commentary game that uses familiar tropes related to the misogynistic nature of 1950s America without perpetuating that misogyny today,” she says. This, she says, is where the team’s cohesive approach to everything from individual responsibility to the larger scope of the game proved most valuable.

Chery points out the game added a critically important nuance. “The game not only discusses misogyny, it does it in a very subversive fashion,” he says. “And it tackles another very difficult aspect of games—humor. The humor doesn’t get stale quickly as often is the case in games.”

That team approach worked. “The success of The Call of Karen has been absolutely astonishing and was certainly my best and favorite project while at WPI,” says Olguin. “We were fortunate enough to win the Provost's MQP Award and achieve a crazy amount of attention and downloads, and it's been absolutely amazing to see so many people engaging with our game.”

And even with a full workload, the team members remained active and involved on campus, including individually taking on varied leadership roles in organizations, garnering community leader awards, developing a web application for WPI’s nonprofit Jazz History Database, and even pursuing an interest in fencing. Matticoli ’21, a computer science and IMGD major with a minor in media art, has three MQPs under his belt and says the MQP elevated his WPI experience. “Being surrounded by kind, supportive and motivated people has been doubly important for my academic success as well as my personal growth and well-being,” he says.

“Everyone put in their all to make The Call of Karen the best game it could possibly be,” says Olguin. “They've been so great along every step of the way, and I can't wait to see what we all end up doing next.”

March 29, 2018
Ukrainian Egg Decorating Takes a Modern Twist
June 03, 2020
If You Build It, They Will Graduate
September 15, 2016
WPI Names New Leaders for Its Physics and Interactive Media...