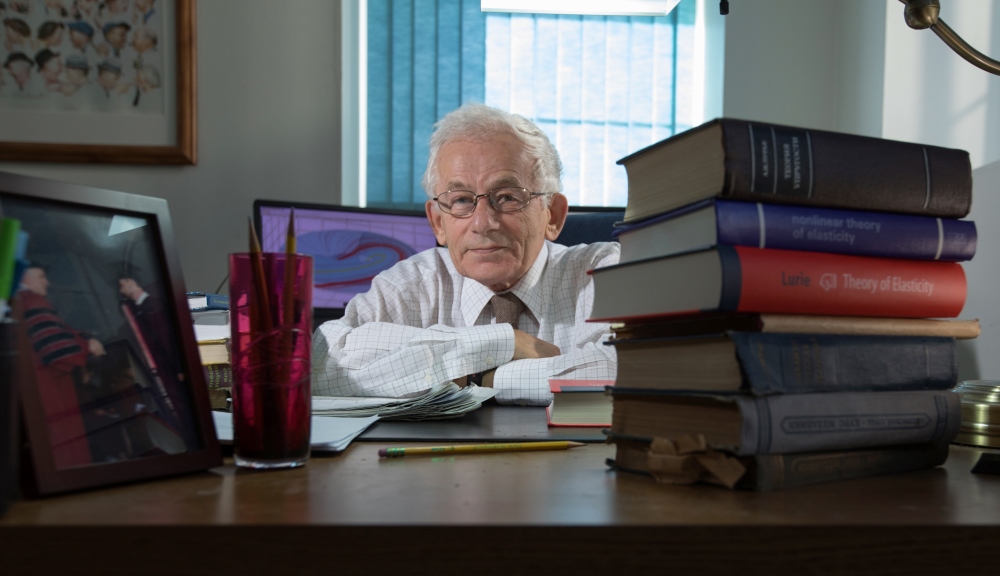 Konstantin Lurie, professor of mathematical sciences, is known internationally for his pioneering work in optimal design, and for his groundbreaking innovation known as active materials. Just as his work has helped establish two active fields within the mathematics of materials, it has proved an impetus to ongoing scholarship around the world. As a recent profile of Lurie in the WPI Journal noted, “nearly six decades after he published his first scientific paper, Lurie not only continues to open new horizons in his field, but to influence and inspire new generations of scholars who are building on the well-crafted foundation he assembled.”

Lurie’s colleagues and former students celebrated his life’s work in late 2016 by organizing an international symposium in his honor. Called “Bridging Scales: Homogenization and Related Topics in Solid Mechanics and Crystal Plasticity,” it also marked Lurie’s 80th birthday. Earlier this year, selected talks from the symposium, along with contributions by some scholars who were unable to attend, were published as a special issue of the journal Archives of Applied Mechanics. “We dedicate this Issue to Konstantin Lurie,” editors A. Cherkaev of the University of Utah and K.C. Le of Ruhr-Universität Bochum write in their introduction to the special issue, “in gratitude for the inspiration he has given us, his colleagues, associates, former students, and friends through his lifelong, tenacious commitment to the study of controllable and variable continuous media.

“Konstantin Lurie’s life and work serve as an exemplary model of focusing all of the individual’s intellectual power on the key points in research of reliable physical models while maintaining an optimistic trust in unlimited technical possibilities. These principles enabled him to open up some new directions in applied mathematics, especially in the areas of contemporary structural optimization and novel time–space compositions.”

The editor’s conclude by noting that Lurie has conducted his novel explorations with an eye to their eventual applications. “Lurie’s research is built on a principle that applications will follow as soon as concepts are developed,” they note. “Some 40 years ago, optimization looked more like an intellectual exercise than an engineering project, because optimal composite materials seemed too complicated to be manufactured. Now, 3D printing and microfabrication have made it possible. Dynamic materials will surely be used in the future.”