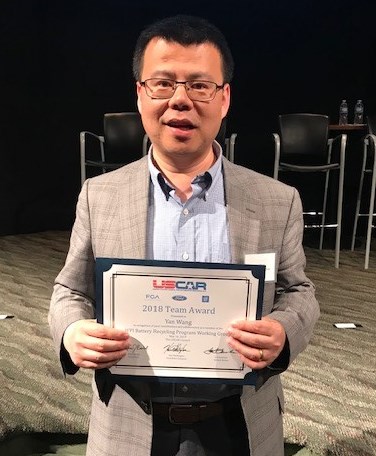 Wang’s research group, the first university researchers to lead a team honored with the Team Award, pioneered and demonstrated a highly effective and economically competitive process for recycling lithium ion batteries, including the cells that power electric and hybrid vehicles. The research originated in Wang’s lab at WPI and has received extensive funding from the National Science Foundation (NSF) and the United States Advanced Battery Consortium LLC (USABC), a collaborative organization of FCA US LLC, Ford Motor Company, and General Motors.

In 2018 Wang received a second major award from USABC, a $1.08 million contract to extend development of the novel recycling process and produce new cathode materials that are increasingly being adopted by automotive battery makers to reduce cost and increase energy density.

In its award citation, USCAR noted that “WPI demonstrated the central claim of their technology of producing consistent nickel manganese cobalt cathode active material powder (NMC) from a diverse mix of input chemistries that performed on par or better than control cells made with commercial NMC powder. Together, the team overcame many technical and logistical challenges to ensure program success. The WPI technology addresses many challenges by being robust to a fluctuating input, tunable to generate an NMC chemistry matching next generation needs, and creating a high-value product that can offset processing costs.” 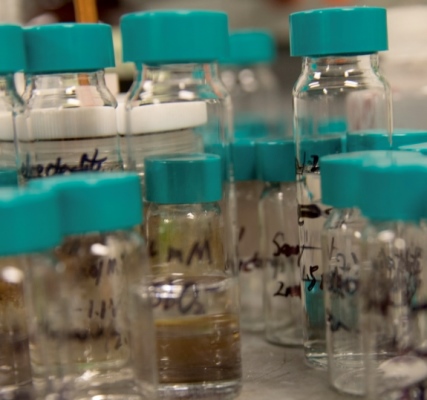 Sharing the award with Wang were representatives of other partners in the USABC-funded project: Ron Elder, Jake Porter, and Nakia Simon from FCA US; Renata Arsenault from Ford; Peter Karlson from GM; Brian Cunningham from the U.S. Department of Energy; David Robertson from Argonne National Laboratory; Dennis Bullen and Jun Wang from A123systems; and Eric Gratz, CEO of Battery Resourcers.

Battery Resourcers was founded in 2015 by Wang, Diran Apelian, Alcoa-Howmet Professor of Mechanical Engineering at WPI, and Gratz, who was then a postdoctoral researcher in Wang’s lab. The company, is seeking to commercialize the process developed by Wang. It currently operates a pilot plant in Worcester and is raising funding to develop a full-scale commercial plant.

Battery Resourcers recently received a Small Business Innovation Research (SBIR) Phase I Award from the Department of Energy to support work on refining recycled battery graphite materials for reuse in energy storage applications. The company had previously received a Small Business Technology Transfer (STTR) Phase I Award and a SBIR Phase II Award from the NSF.

USCAR was founded in 1992 to strengthen the technology base of the U.S. auto industry through cooperative research and development. It is governed by the three-member council whose membership includes senior technology executives from each of the U.S. automakers.