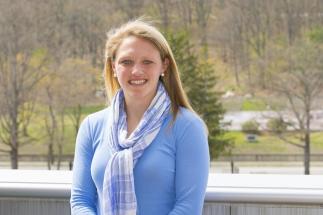 Emily Doherty Nominated for NCAA Woman of the Year

The honor is given to student-athletes based on academics, athletics, service, and leadership

During her days as a midfielder at Worcester Academy, Emily Doherty ’16 didn’t even expect to play soccer in college.

“I didn’t think I was at that level,” she says.

The industrial engineering major who graduated in May underestimated herself.

Emily Doherty on the pitch.

Doherty was not only a standout at WPI on the pitch and off, but this past spring the 22-year-old from Shrewsbury was selected to represent WPI as its nominee for NCAA Woman of the Year. The honor is given to student-athletes based on academics, athletics, service, and leadership.

“On the field, she was nearly impossible to stop, posting 18 goals in her senior campaign,” says Women’s Soccer coach Stephanie Schafer. “Her impact in games will be sorely missed this season, but the reputation and legacy she leaves behind helps set the standard for the future of WPI Women’s Soccer.”

Doherty says she had no idea why associate athletic director and sports information director Rusty Eggen asked her to stop by his office last spring, never for a minute thinking she would be in the running for the honor that has been given out for the past 26 years to a female student-athlete from campuses across the country, including the 11 institutions that make up NEWMAC.

“I was in shock when he told me,” she recalls.

To her coach, Doherty is exactly the kind of woman the award is meant to honor.

“I cannot say enough great things about Emily. Emily embodies what it means to be a student athlete,” Schafer says. “She was dedicated to her sport and constantly pushed herself to become a better player. In the classroom, she maintained a high GPA throughout her four years at WPI, and challenged herself with her course load and embraced WPI’s off-campus and on-campus project-based opportunities.”

It was a not-so-gentle nudge from her father that even got her to WPI. 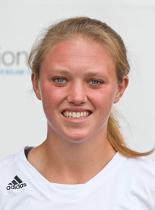 “My dad used to work for Johnson & Johnson, and he hired a lot of people who had graduated from WPI, and knew the caliber of the students,” she says. “So he insisted I at least visit the campus.”

She agreed, but growing up just a few miles down the road, she was sure the Worcester campus would be way too close to home for college.

“But from that very first time I visited and stepped on campus, I fell in love,” she says. “I never turned back, I love everything about this school.”

She says she never thought she was a good enough soccer player in high school to make a college team, but once at WPI she realized that maybe she had a shot.

“Being able to play soccer made my experience even better,” she says about the game that has been her life since she was 5.

Doherty started for the Engineers all four years, first as a midfielder and switching to forward in her junior year.

She excelled each year, but said she didn’t want to be known only as a soccer player.

“I wanted to lead by example, on and off the field. Grades are just as important,” she says.

So she worked hard in the classroom, and got involved as a teaching assistant for a business lab, as an officer in the Institute of Industrial Engineers and the industrial engineers honor society Alpha Pi Nu. She also participated in Big Brothers/ Big Sisters, Colleges Against Cancer, and the Student-Athlete Advisory Committee.

On the field she led the team to the playoffs three times, capping off her final season with a penalty-kick loss in the quarterfinals to Springfield College that she said left her proud of the team’s accomplishments.

“We progressively got better every year, and I guess that last game sticks out for me because it was the closest we ever came,” she says.

She is also proud of the work she and three classmates did in Namibia, working for the country’s lone railway company as part of her IQP. The project team worked with Trans Namibia to standardize processes to decrease delays and improve safety

“I think we were successful, because we were the first group from WPI to go there and work with Trans Namibia," she says, "and the next year they put in applications for three more projects.”

Doherty, who started in June as a program manager at Dell EMC in Hopkinton, is still attending WPI, working toward her master's in Operations and Analytics Management.

The recipient of the NCAA Woman of the Year award will be announced on Oct. 18, and Doherty knows she is up against tough competition in representing NEWMAC in the final round.

“There are so many amazing women athletes,” she says.